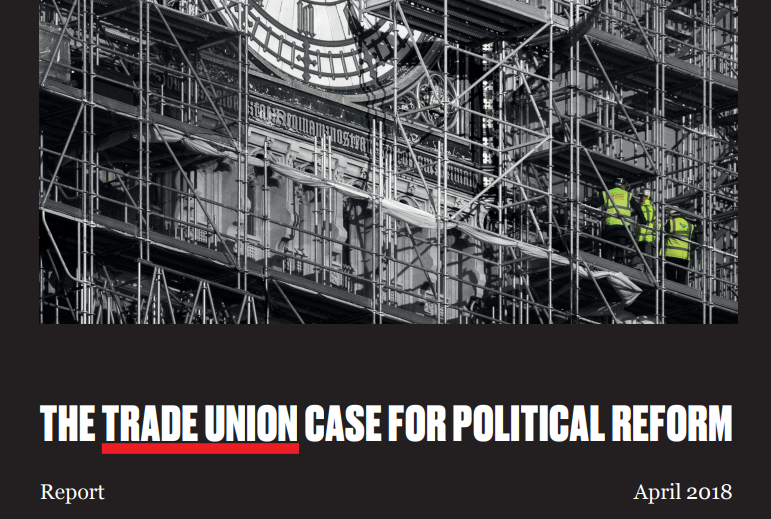 Lynn Henderson, PCS National Officer (Scotland and Northern Ireland) and Vice President of the Scottish TUC, backs the STUC’s “small but significant shift” in favour of UK electoral reform, and says new report The Trade Union case for Political Reform shows why it matters to workers

“Democracy is never a finished job: whether it was extending the franchise to those without property, securing votes for women, or winning trade union rights, history tells us we make great progress and we have minor set-backs – but democracy is something that we have to remake over and over again.”

It’s an honour to announce that a small but significant shift has now taken place in the trade union movement: the STUC has unanimously agreed that the balance has shifted when it comes to reform – the burden of  proof now falls upon those that want to keep the status quo.

From their inception, trade unions have enabled workers to resist concentrations of power and wealth.

And today, trade unionists are increasingly clear that the structure of political institutions – and how they are composed – makes a fundamental difference to the balance of power in this country: namely, whether that system works in the interests of the many, or the few.

But the position of unions can have a fundamental impact on how our democracy and economy works. It was trade unions throwing the weight behind democratic reform that helped secure fair votes for elections in New Zealand in the 1990s.

Elections in the UK are increasingly unstable – with the system failing to deliver on First Past the Post’s central promise: ‘strong and stable’ government. Instead, time and again we have seen progressive majorities in the UK over-ridden by the vagaries of a broken voting system: one in which votes are ‘split’ on the left, while millions of workers’ voices are thrown on the electoral scrapheap.

Yet how politics works has changed almost beyond recognition since we last had a say on changing the voting system. One thing is increasingly clear amid the chaos: the establishment voting system is rigged against workers. Where Scotland’s proportional voting systems foster political engagement and counters alienation, Westminster’s breeds apathy and distrust.

A report by trade unionists released on Monday [16 April] shows that Westminster’s system offers huge opportunities for the union movement, with a new democratic system for a new economy. PR works towards a consensual politics – where unions are included in government as key players. Instead, we have an ‘elective dictatorship’ and unchecked power.

A new democratic model is not only good for workers but social outcomes in general. Countries which use PR have larger welfare states and lower rates of prison incarceration, and lower economic equality. All of the EU countries which have embedded trade union rights, high union density and extensive collective bargaining coverage use PR electoral systems.

Instead, we see resources disproportionately given to a handful of swing seats – leaving large parts of the country to wither on the vine. So-called ‘safe seats’ are starved of vital investment.

Westminster’s system is skewed politically, with the UK constitution increasingly rigged against the left. Yet Labour would have been the largest party in Westminster under Scotland’s Single Transferable Vote system in 2017, while countries with PR tend to elect more left-wing governments than countries with majoritarian electoral systems.

Indeed, under proposed new boundaries, electoral bias against the left means the Conservatives will only need a lead of 1.6% to win a majority (less than they won by in 2017) – while Labour would need a lead of more than 8%.

Finally, Westminster’s voting system is holding back gender inequality. In the centenary of women’s suffrage, it is important to note that while the majority of union members are now women, the Westminster system is effectively locking them out of hundreds of closed-off ‘safe seats’ across the country – with the single-member nature of constituencies allowing men to ‘reserve’ seats without serious challenge.

From the calls of the Chartists to pushing for devolution, unions have long been at the forefront of demands for a better democracy. Today, there is a new democratic frontier for trade unions in Britain: electoral reform.

There is increasing momentum for change within the union movement. How we get there is up for discussion, but one thing it clear: we cannot begin to build a truly empowering politics without fair votes.