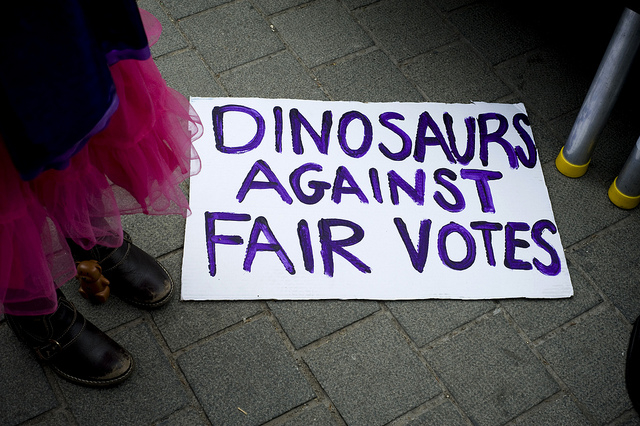 Ahead of TUC congress next week in Manchester, STUC President Lynn Henderson makes the workers´case for democratic reform at Westminster, arguing that ending first-past-the-post will lead to more progressive policy

THERE´S no denying that devolution has granted the people of Scotland greater autonomy over our own affairs.

But devolution has also shown that there are other ways of doing politics than the stale model used at Westminster.

It has given us a focal point, and the Scottish Parliament has developed its own voice and confidence.

This has allowed it to effectively challenge Westminster where it has been felt this was required. We have seen this over Brexit – where Scottish parties have shown their determination not to let the Conservative-led government in London dictate how things are to be done.

The transfer of powers has also allowed for significant democratic changes to be made. Local democracy in Scotland is by no means perfect – but local representatives are elected using a fairer voting system, where votes more truly reflect the will of the community as a whole.

The same applies for Scottish Parliament elections, which use the Additional Member System – a ‘top up’ system that ensures seats more fairly reflect how people vote.

And we’ve led the way in extending the franchise to 16 and 17 year olds. This group proved their mettle in the Scottish Independence referendum campaign, where they contributed significantly to the debate.

Young people were not, as had been feared, merely following the directions of their parents and peers. They were asking their own questions about what mattered to them and were helping to set the agenda.

These changes reflect something more fundamental: a shift to a more consensual model of democratic representation than the UK has historically been accustomed to.

It’s a model which in the long-term favours stronger workers’ rights. There is evidence for this around the world, where proportional voting systems result in more progressive policy. When everyone’s vote counts – when workers have real, guaranteed power at the ballot box – we all benefit.

And when a larger number of parties work together, they represent a much broader base. They must fight for all votes – not just those in ‘swing’ seats – and policy improves as a result.

This is where the space has opened for trade unions to seize the agenda: to campaign for people power at the ballot box, as a starting point for our issues, from investment in public services to a fairer distribution of wealth and an end to privatisation.

READ MORE – When Citizens Assemble: Potential for “democracy’s rebirth” to be explored in Scotland

It is to embrace Labour’s mantra: ‘for the many not the few’ – and give power to the many.

Unions have long been at the forefront of demands for democratic change. In Scotland, the trade union movement was at the forefront of calls for a Scottish Parliament, and continues to argue equal women’s representation, for fair votes and a stronger democracy.

Learning from Scotland, the outdated Westminster stitch-up needs to make way for a more democratic, consensual form of politics. These are the latest frontiers for politics in Westminster: for an end to the broken First Past the Post voting system. For the ‘crony-stuffed’ House of Lords to go. For the vote to be extended to 16 and 17 year olds – the next generation of leaders.

There’s more to be done in Scotland, too of course. But together, the union movement will be leading the campaign for a politics for the many.

Lynn Henderson is on the steering board of Politics for the Many, a trade union campaign group for political reform.