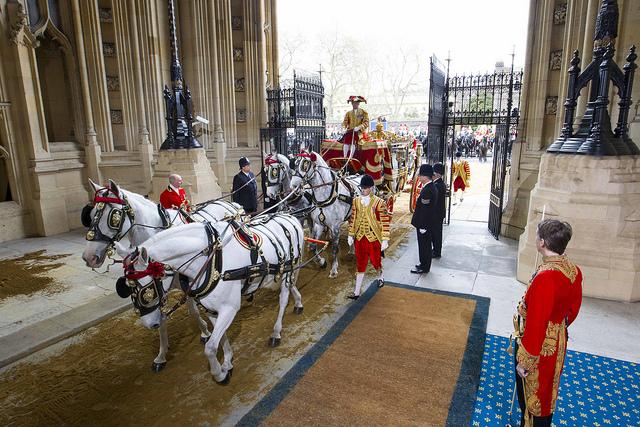 Written by James Meadway for the New Economics Foundation.

LAST week’s Queen’s Speech has a number of economic implications. It set out further restrictions on welfare spending, an increase to the personal allowance, and a renewed commitment to “full employment”.

Much of this represents an acceleration of the previous government’s economic agenda. But the measures proposed are unlikely to have the benefits claimed, and are highly unlikely to achieve Chancellor George Osborne’s commitment to move the government into surplus by 2018/19.

The annual ritual of the state opening of Parliament centres on the monarch’s speech in the House of Lords. This outlines whatever the government of the day considers to be its most important new Bills in the coming session of Parliament.

Now able to form a small majority government, the content of the speech was decided entirely by the Conservatives. The Queen’s Speech contained a number of proposed Bills that will have a direct economic impact.

– Spending on working age benefits, tax credits, and child benefits will be frozen for two years from April 2016. In addition, the welfare cap will be tightened to PS23,000 a year.

– A commitment to create two million new jobs and three million apprenticeships, part of the government’s goal to achieve the highest employment rate in the G7.

– Raising the personal allowance to a level that ensures no-one on the minimum wage will pay income tax.

– A “tax lock commitment” that will prevent the government increasing income tax, national insurance or VAT before 2020.

The welfare cap was previously introduced as an attempt to reduce overall expenditure on social security. It currently prevents any single household from claiming social security payments above PS26,000 annually. This includes housing benefit, with evidence suggesting that those hardest hit by the cap have responded by moving house: evidence from the Department for Work and Pensions suggests around 14% of those most affected have moved in the last year.

It is the 24,000 people already affected who will be hardest hit by the further restriction of the cap to PS23,000. These households stand to lose around an additional PS3,000 a year – a significant proportion of their income (up to 11.5%). However, because the number of affected households is so small, the measure is expected to save the Treasury just PS0.1bn a year.

The freeze on tax credits, working age benefits, and child benefits is similarly expected to save a comparably small amount of money. “Freeze” keeping the benefit paid at the same level in cash terms, rather than increasing it in line with inflation, as is usual. But with inflation forecasts so low, the amount the benefits would have been raised by is also very small. On IFS projections the measure is expected to save only PS1bn – a fraction of the total social security budget – and cost the typical claimant less than PS100.

The Conservatives’ stated aim, however, is to save PS12bn on the UK’s PS220bn social security budget. Documents supporting the Queen’s Speech reiterate their claim that they will protect pension spending, which comes to around 40% of the total budget. The benefits cap reduction and other freezes leave over PS10bn still to be cut from the remaining, non-protected welfare spending. Areas left unprotected include tax credits, Jobseekers’ Allowance, disability and housing benefits. It is not clear how the government will meet their target without severe reductions across these areas.

Between 2010 and 2015, the UK economy created 1.8m new jobs – a statistic regularly cited by this and the previous government. The proposed “Full Employment and Welfare Bill” sets a target of a further 2m new jobs, presumably by the end of this Parliament, with a new monitoring service established to oversee progress. These will not be public sector jobs, which are set to continue falling rapidly. Instead, the government will rely on the private sector. It is possible, at least in some sectors, that if demand for employment continues to rise, wages will begin to pick up. But with continuing low rates of investment and productivity not growing since 2007, it is likely that the current pattern of low paid and insecure job creation will continue for most. Only one in 40 of the new jobs created since 2008 has been full-time and permanent, although this situation may have been improving over the last few months. In any case, attempts to restrict trade unions will further undermine the ability of workers to bargain for better wages and conditions.

Further increases to the personal allowance will mean no one earning the minimum wage will pay income tax. For full-time work, that is today around PS13,300 a year. The current personal allowance is PS10,600, rising to PS11,000 next year. Despite appearances, this measure is far from progressive:

– Around 5m people already earn less than the current personal allowance, so raising it makes no difference to them. The numbers affected by the latest revision will be negligible.

– Resolution Foundation estimates that the last personal allowance uprating will cost the Treasury PS2bn. Of this, less than a quarter of the bill will go to the poorest 50% of households. The majority of the gain goes to the better-off.

This government is not the first to moot the idea of a “tax lock”, but when Alastair Darling proposed the same measure in 2010, George Osborne was excoriating in Parliament and later repealed the Act. Governments must generally raise taxes to help pay for their activities. Such taxes may be useful in other ways, helping to reduce inequality or limit undesirable behaviour – this is the theory behind taxes on tobacco, but can also be applied to taxes on pollutants.

A government that was concerned about inequality, or that sought to restrict socially harmful behaviour, or that was looking to secure funding for its own activities, would not want to introduce a lock like this. Nor is it particularly advisable to limit a government’s ability to manoeuvre in this way given that it is impossible to know what will happen in the future. It also is likely to make reforms to the tax system harder to implement.

Given that it makes little economic sense, the purpose of the legislation is likely in two parts: the first is to delegitimise taxation in general, and lock in place the idea that taxes are an inherent bad. The second is to help delegitimise government spending in general, by restricting its ability to finance that spending.

Government surplus (or fiscal surplus): The opposite of a government (or fiscal) deficit. This is when the government is getting more in taxes than it is spending. There is nothing inherently desirable about this: if the government is getting more income (in taxes) than it is spending, it implies someone else must be getting less in income than they spending, since we’re all part of the same economy. Either that, or we will be forced into a recession, because no-one will be spending enough.

Personal allowance: The name given to that part of your income the tax system allows you to keep without paying any income taxes. The previous government raised this level substantially, with a total cost of PS14bn.

TUC (12 November 2014), “Only one in every forty net jobs since the recession is for a full-time employee, says the TUC”: Trades Union Congress: http://bit.ly/1ct369R