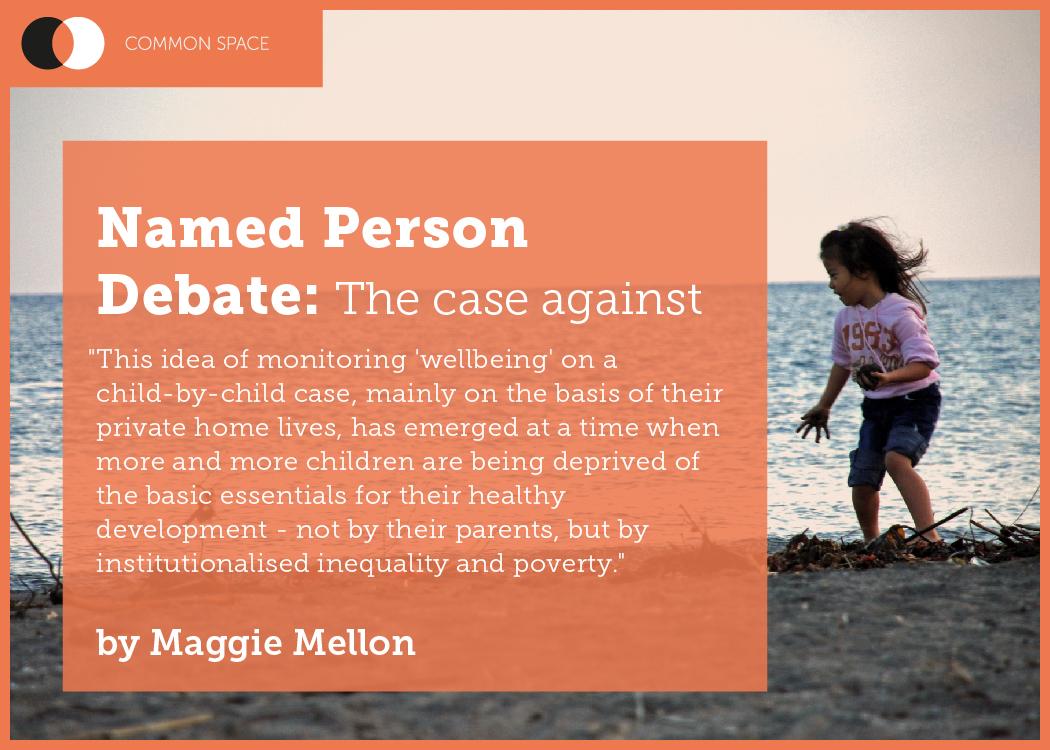 SCOTLAND, like the rest of the UK and much of Europe, is an increasingly unequal society.

Poverty and inequality are what stunt children’s lives and these things cannot be tackled by caseworking the entire population of children. Instead, housing, jobs, income, education, health services and the environment are the basis for the overall wellbeing of children. It is these that are, or should be, the business of government, rather than the micro-management of family life.

However micro-managing is just what the ‘Named Person’ law, and the Getting It Right For Every Child policy it comes from, set out to do. These measures are part of the popular un-progressive dogma that it is predominantly parents’ behaviour and choices that shape children’s lives.

These measures are part of the popular un-progressive dogma that it is predominantly parents’ behaviour and choices that shape children’s lives.

This and the relentless focus on ‘risk’ have created an authoritarian rather than a supportive approach, certainly in social work, my own profession. This has made child and family social work increasingly disliked and distrusted among the very families who should be being helped, and made the job increasingly stressful for social workers.

I believe that this authoritarian approach to families is being extended with the introduction of the Named Person legislation. Not only will there be more families under investigation, but stress and risk aversion will permeate further into education and health services.

They, too, will be judged on factors that they can’t control – poverty, despair, stress caused by structural inequality. What we have with the Children and Young People Act and its Named Person provision is a conflation of need and of risk. It is in essence an attempt to ‘casework’ the whole population of children and families, and will bear particularly on the poor, the different, the most disadvantaged.

It is, in my view, the exact opposite of the progressive universalist measures that are needed. It is worth noting that this idea of monitoring ‘wellbeing’ on a child-by-child case, mainly on the basis of their private home lives, has emerged at a time when more and more children are being deprived of the basic essentials for their healthy and optimum development – not by their parents, but by institutionalised inequality and poverty.

What is the ‘named person scheme’ and why are people worried about it?

All of this investigation falls disproportionately on poor children and families, who are being policed rather than supported as actual support services are cut. Imagine what all those assessments and investigations and meetings cost. And imagine instead an investment in open door help and support.

If you have not experienced the juggernaut of child protection investigations in your or a friends or family members’ lives, or seen the damage done by heavy handed, intrusive intervention, you may be able to believe that ‘services’ are benevolent and that all parents need to be watched very carefully in case one child slips through the net.

I have heard the justification that ‘families are where children are abused’ often, but families are more usually the place that keeps children safe and happy, and parents are more usually children’s defenders and champions against the often casual carelessness or cruelty of services. Children separated from their families in care and in schools are more vulnerable to abuse than children who remain within their families.

Much of the opposition to the Named Person law has been led by the Christian Institute, which has tended to stress parental rights and authority. This has been made much of by defenders of the Named Person scheme as proving the case that it is mainly reactionaries who oppose the law.

The Law Society of Scotland, the Faculty of Advocates, the Scottish Parent Teachers and Friends, Scottish Child Law Centre and other organisations oppose the legislation. The majority of local authorities expressed opposition during the consultation stage.

The Law Society of Scotland, the Faculty of Advocates, the Scottish Parent Teachers and Friends, Scottish Child Law Centre and other organisations also oppose the legislation. The majority of local authorities expressed opposition during the consultation stage. The Scottish Association of Social Workers did not support the proposal.

But this opposition does not fit with the narrative that this is a battle between a good welfare state against rightwing Christian fundamentalists and has tended not to get much attention, at least until recently when Iain McWhirter and other commentators began to pay attention and to comment. It seems to me to be the case that many supporters have not read the legislation.

Supporters in government and in the children’s charities who are the main spokespeople continue to insist that the Named Person is an ‘entitlement’ for parents. They point to leaflets and other government material which explains that it is all voluntary and a response to parents’ requests for a single point of contact. They might intend it to be so, they might wish it to be so. It is not.

Those who are in doubt should go and read the legislation. It is online and easy to get hold of. It is unequivocally a no opt-out scheme for all children, with clear powers to override parents’ or children’s views or wishes.

This is not an entitlement, nor can parents afford to ignore the Named Person’s view, as their role does not depend on parental consent or agreement (there were and are already sufficient powers available to override parents’ and children’s wishes or views if a child is feared to be at risk of significant harm).

Those who are in doubt should go and read the legislation. It is online and easy to get hold of. It is unequivocally a no opt-out scheme for all children, with clear powers to override parents’ or children’s views or wishes.

The Named Person role and responsibilities do not come with any power to allocate homes, food, clothes, holidays, home helps, or even just therapeutic or health services. There are fewer services on the ground providing practical help and those that do are facing the biggest cuts.

But the Named Person juggernaut is set to roll on. I think that last paragraph says everything that needs to be said about wrong priorities for legislation and for services.