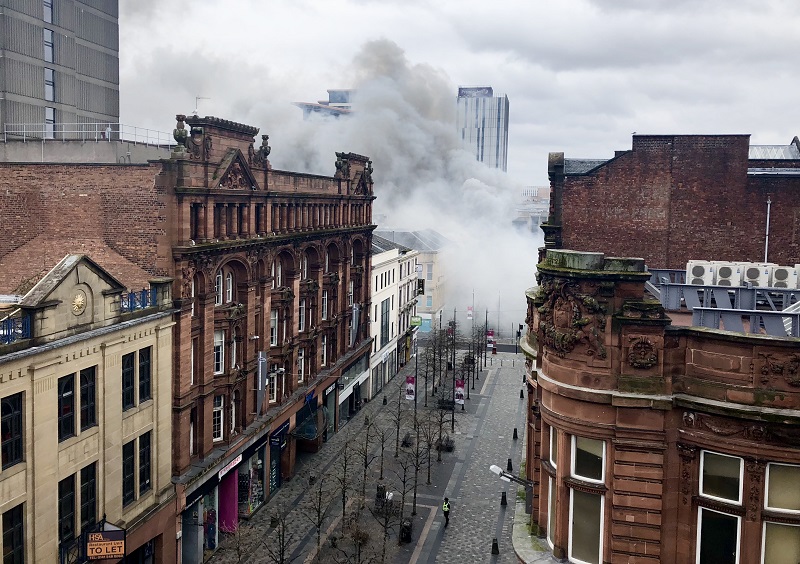 By Alasdair Clark and Morgane Colinet

MAJOR DISRUPTION in Glasgow city centre as emergency services rush to bring a “well developed” fire under control on Sauchiehall street, one of the main pedestrian areas in Glasgow.

Emergency crews have been dealing with the fire on the pedestrian area since around 8:20am on Thursday morning, with eight fire appliances in attendance alongside a police “command unit”.

Officers on scene confirmed that no persons were reported to be trapped after local residents and shops in the area surrounding the scene were evacuated, including the retailer Holland and Barret.

“Operations Control mobilised a number of fire engines to Sauchiehall Street, Glasgow, where firefighters are currently on the scene working to extinguish the fire.

“Crews have safely evacuated the occupants of several nearby properties.”

Police on the perimeter of the sectioned off area were seen using face masks as the street filled with thick smoke.

Speaking to CommonSpace, one eyewitness who had been evacuated from their place of work said it was not immediately clear where the fire had come from, adding that they did not expect to be able to return to work for the rest of today.

Significant disruption is expected throughout the day on Sauchiehall street and in the surrounding area of Hope Street and Renfrew Street, located near Glasgow’s main public transport links, where traffic restrictions remain in place at the time of publication.

Significant disruption expected on Sauchiehall Street and in the surrounding area for some time as emergency services try to bring the fire under control pic.twitter.com/4qTqpnaQT3