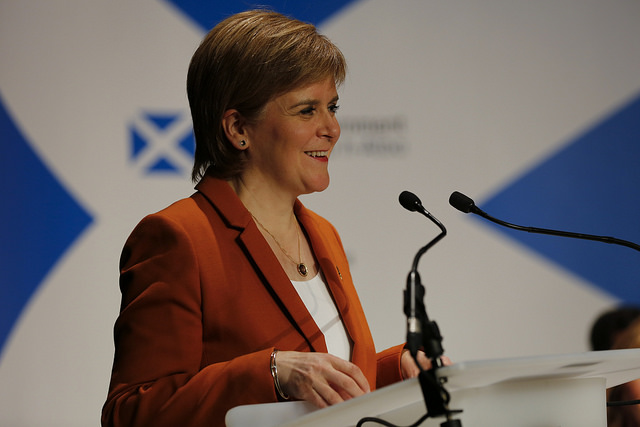 CommonSpace provides a detailed overview of the key announcements in Nicola Sturgeon’s Programme for Government, including what wasn’t addressed

FIRST MINISTER NICOLA STURGEON has announced a swathe of new measures as part of the Scottish Government’s plans for the coming year, including a package of initiatives on mental health, progress on the Scottish National Investment Bank and enshrining further protections for children in law, as well as increased funding in areas of infrastructure, health and the environment.

However, the 2018/19 Programme for Government noticeably fails to address repeated calls by the Scottish Greens to address local tax reform – a condition for the Greens’ support for the Scottish Government in the next Scottish Budget – and has brushed aside criticism of the rollout of further standardised testing in Scottish schools.

In her introductory remarks, Sturgeon again reiterated her emphasis on the fact that everything outlined in the Programme for Government suffers under the shadow of Brexit, the UK Government’s handling of which has been “shamefully shambolic”, she argued.

In an apparent refutation of Tory MSP Jackson Carlaw’s recent challenge to the Scottish Government to back Prime Minister Theresa May’s favoured deal on Brexit, or else “walk through the division lobbies with Jacob Rees-Mogg and Boris Johnson,” Sturgeon maintained the Scottish Government’s position of advocating for EU membership, or at least remaining in the single market and the customs union.

As the terms of Brexit become clearer, Sturgeon continued, the Scottish Government will set out its own view on how “Scotland’s interests” can best be protected, a statement which does not rule out the pursuit of a second independence referendum.

In what may have been a veiled reference to recent polling indicating that a majority of Scots would favour independence in the aftermath of Brexit taking effect, Sturgeon added: “It is clear that an increasing number of our fellow citizens believe as we do that the best future lies in becoming an independent country”.

READ MORE- Craig Dalzell: The Programme for Government is fine, but unambitious

In contrast to the Scottish Government’s previous attempt at a “radical relaunch”, this year’s Programme for Government flows from the “vision” of last year’s document, Sturgeon said, and will build upon economic initiatives and Scotland’s new social security system, embodying Scotland’s “enduring values of social justice.”

In an unapologetic defence of the Scottish economy’s strength, Sturgeon highlighted that Scotland’s economic growth has been higher than the rest of the UK over the past year; that Scottish exports have seen the fastest growth in the UK (up by 12 per cent); and that the productivity gap between Scotland and the rest of the UK – a source of much criticism from the Scottish Conservatives – has narrowed.

Sturgeon said: “These are strong foundations but we must intensify our efforts now to build an economy fit for the future.”

It was then confirmed that, in keeping with the recommendations of the Barclay review, there will be an increase in the number of modern apprenticeships made available, and a new non-domestic rates bill, encompassing rates relief and tied to three year valuations. A new economic action plan will be published by the Scottish Government in October.

READ MORE: Asking the experts: What does Scotland need from the Programme for Government?

On infrastructure, the first minister elaborated on this week’s other recent announcements from the Scottish Government concerning environmentally friendly measures, confirming investment of £15m to add electric charge points to homes, businesses and council premises, an increase in the low carbon transport fund, an additional 500 low emission vehicles added to public sector fleets.

This follows the First Minister’s claim earlier this week that the Programme for Government would place Scotland at the “forefront of low carbon travel”, an assertion that was disputed by Scottish Green transport spokesperson John Finnie, who dismissed the claim as hollow in comparison with Norway’s commitment to phasing out petrol and diesel cars by 2025, seven years ahead of the Scottish Government’s aim to do the same by 2032.

Sturgeon added: “It’s worth being clear about the scale of our ambition – the targets in the Climate Change Bill for 2020, 2030 and 2040 are the most stringent statutory targets anywhere in the world, without exception.”

This claim was countered by Friends of the Earth Scotland shotly after the First Minister’s speech, who issued a statement saying: “We were looking for a commitment from Nicola Sturgeon to aim higher and improve the targets in the draft climate bill. Sadly, without this Scotland cannot claim to be an international climate leader.”

The Scottish Government will also “take forward” plans to prepare for public sector bid to the next ScotRail franchise. The announcement in August by Michael Matheson that this would be possible was cautiously welcomed by the transport union TSSA, who nevertheless argued that the franchise system itself needs to be scrapped altogether, arguing that it costs operators £30m which could be spent on improving services.

Further cementing its position on Brexit, Sturgeon emphasised the divided between the Scottish Government and the UK Government on immigration, saying “Scotland remains an open, inclusive, outward-looking nation.”

Arguing that it was unjust for EU citizens living in Scotland to pay settled status fees, Sturgeon went on to announce that EU citizens working in devolved public services will have their settle status fees covered by the Scottish Government.

The Scottish Government will also seek to protect the democratic rights of EU citizens in an Electoral Franchise Bill, which will include provisions to extend the franchise for Scottish Parliament and local government elections to EU citizens. The bill will be brought forward after a consultation on prisoner voting – an issue which has already seen calls for reform from left-wing, cross-party MSPs – has been undertaken.

Further legislative action will be taken to incorporate the UN Convention into the Rights of the Child into Scots law, a move welcomed by the Scottish Liberal Democrats, who have been advocating for such a move since 2016. This commitment is coupled with a pledge from Sturgeon to ensure greater focus on preventing Adverse Experiences in Childhood (ACES) and offering support for those who have experienced them.

Building on prior promises to ensure creator support for Scotland’s careworkers, Sturgeon also announced that the new Carers Allowance Supplement will be begin making its first payments next week, and that the Young Carer Grant will start being paid from autumn of 2019.

On the range of new institutions announced by the Scottish Government in recent years, Sturgeon announced that new legislation would underpin the mission of the Scottish National Investment Bank (SNIB), and that a formal consultation on a publicly owned, not-for-profit energy company – first announced at the SNP’s autumn conference last year – will begin in 2019. However, no mention was made regarding plans for a Scottish national infrastructure company, despite a motion being passed at the SNP’s most recent conference in March in favour of the proposal, which would see private finance removed from the public infrastructure process.

READ MORE: Court process can “cause as much damage” for victims of domestic abuse, say women’s rights advocates

On Justice, Sturgeon placed great focus upon the rights of victims, confirming that the Scottish Government will expand the range of serious offences where the victim has the right to make an impact statement, and will provide £2 million over the course of the next three years to improve speedier access to support services for those affected by rape or sexual assault.

The announcements today address some but not all criticisms levelled at the current court system and support services in Scotland by groups such as Scottish Women’s Aid, ASSIST, Zero Tolerance, the Scottish Women’s Rights Centre, Rape Crisis Scotland, and the Scottish Human Rights Commission, who recently outlined to CommonSpace the reforms they feel are necessary to adequately support victims of rape and domestic abuse. CommonSpace has backed five reforms to the Scottish courts system to make it easier for victims to pursue convictions of abusers.

Several of the bills planned for the next year also tackle matters relating to justice, including a new Family Law Bill, a Female Genital Mutilation Bill, a Biometric Data Bill, a Disclosure Bill and a Census Bill, which will underpin the Scottish Government’s continuing efforts to develop legislation to reform Scots law on gender recognition.

A commitment to consult on reforming the law on defamation has also been welcomed by voices across the Scottish media, following much pressure on the subject.

The relevant section of the Programme on Defamation reform (on page 107). Positive noises from the government. pic.twitter.com/UxoRapAuPP

In one of the Programme’s most significant announcements, the first minister revealed a package of measures regarding mental health that the Scottish Government will pursue, amounting to £250m in new investment. This will include £60m for school nursing and counselling services, ensuring that every secondary school is catered for; enhanced learning materials for teachers on mental health first aid; a community mental health wellbeing service for 5-to-24 year olds, and the fast-tracking of care for young people suffering from the most serious mental illnesses.

Addressing the health portfolio more broadly, while Sturgeon pointed to high public approval of the NHS in Scotland, she acknowledged that current waiting times were unacceptable, and announced that a waiting times improvement plan will be published by the health secretary. Part of this longer-term plan, Sturgeon said, will include, over the course of this parliament, the creation of five new elective treatment centres.

On Education, Sturgeon did not address the controversy faced by the Scottish Government’s plans to roll out increased standardised testing for primary-aged children in Scotland, but instead stated that the Scottish Government will “accelerate” its planned education reforms, which have been watered down after a previous plan to introduce an Education Bill had been scrapped.

Scottish Green co-convenor Patrick Harvie told CommonSpace in March of this year that the party believe it is reasonable to see “a bill on Council Tax replacement at some point during this parliamentary session, before the next Holyrood election.”