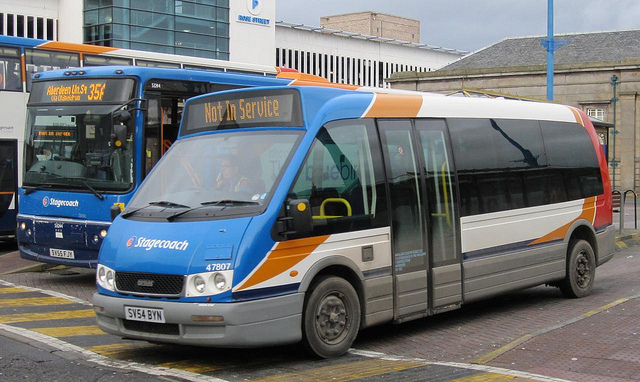 73 per cent of SNP voters in favour, compared to 9 per cent against

58 PER CENT of Scots believe bus services should be run by public operators, a new poll has found, increasing pressure on new Transport Secretary Michael Matheson to take action.

The Panelbase poll, commissioned by the Scottish Greens, found only 15 per cent believe buses should be run by private firms, with the remainder saying they don’t know.

The poll also reveals a huge backing for public ownership among SNP voters, with 73 per cent in favour and just 9 per cent against.

The poll of 1,000 Scots was taken between 21 and 27 June, after the publication of the SNP’s new Transport Bill, which advocates public ownership only on routes which private sector providers, like Brian Souter’s Stagecoach, deem “unprofitable”.

Responding to the poll, Scottish Greens transport spokesperson John Finnie MSP said it shows “the new transport secretary has work to do to get on board with public opinion”.

“People rightly view public transport as a public service and it should be run as such. The measures outlined in the Transport Bill would still leave many communities stranded and public bodies picking up the pieces when private operators walk away,” he added.

Bus services operate on a council by council basis and in every area of Scotland except Lothians are run by private companies, after the service was deregulated under Tory prime minister Margaret Thatcher in 1986 to allow private companies to operate services at a profit instead of the previous local authority-owned bus companies.

ANALYSIS: Scotland’s bus regulations have barely changed since Thatcher – is it not time for public ownership?

Bus travel is the only public transport to see numbers fall in recent years, with the number of buses in operation and the distance they are travelling down, while fares have risen 17 per cent in cash terms (five per cent real terms) over the past five years. Despite passenger numbers in decline, bus operator revenues have risen with operating costs falling in recent years.

Nearly half of all revenues come through grants and concessionary travel reimbursements from the Scottish Government and local authorities.

Finnie said the Scottish Government should re-focus its efforts on improving bus services in Scotland.

He said: “Earlier this year Green MSPs led a debate at Holyrood on the need for better buses, as three quarters of public transport journeys in Scotland are by bus. These services are vital for people going to work, to school and college, to the hospital or shops or to visit friends and family. Yet many are faced with cuts to routes, poor service and fare hikes.

“Bus patronage in Scotland has fallen by 43 million trips in the last five years, with a recent Citizens Advice Scotland report showing two thirds of Scots are dissatisfied with the frequency of their local bus services, while over half say services are late.

“Successive governments have been happy to spend millions on motorways and encourage the growth of air travel, yet bus services – the most common form of public transport – have been left to wither. The publicly-run success story that is Lothian Buses should be the norm across Scotland, and if ministers are wise they will strengthen the Transport Bill to reflect the public’s priority.”

Last month, Dougie Maguire, regional coordinating officer for Unite the union, which represents bus workers, told CommonSpace the Transport Bill was a missed opportunity: “It is difficult to see how the proposals to shake up Scotland’s bus services can be advanced or indeed how the Transport Minister proposes to halt the decline in passenger numbers with this legislation.

“The continued use of citizens’ money to provide profits for private companies will not increase passenger numbers or ensure that public transport services are available to all.”

READ MORE: Going backwards: How UK living standards have gone into reverse 10 years after the recession

A Transport Scotland spokesperson defended the bill, telling CommonSpace: “The Transport (Scotland) Bill will support local authorities to meet local needs, whether they wish to pursue partnership working, local franchising, or running their own buses where appropriate.  Local authorities can already run their own services in some limited circumstances, as some do. The Bill extends these powers.

“The Bill allows local authorities to deliver bus services which are not being offered by commercial companies. They can do this either directly themselves or through a council owned company to address gaps in the services provided in their local network. We are aware there are a range of views on these matters and the legislative process will allow these to be aired as the Bill undergoes Parliamentary scrutiny.”

CommonSpace reported on Tuesday [3 July] on a new report by the Joseph Rowntree Foundation (JRF) showing rising bus costs over the past decade were contributing to an increased difficulty for low-income households to be able to fund a minimum acceptable standard of living in the UK.

“Bus travel is 65 per cent more expensive in 2018 than in 2008, and households feel you can rely on it less, as services deteriorate,” JRF found, continuing: “Transport now comprises about 20 per cent of a minimum household budget, compared to around 10 per cent in 2008.”