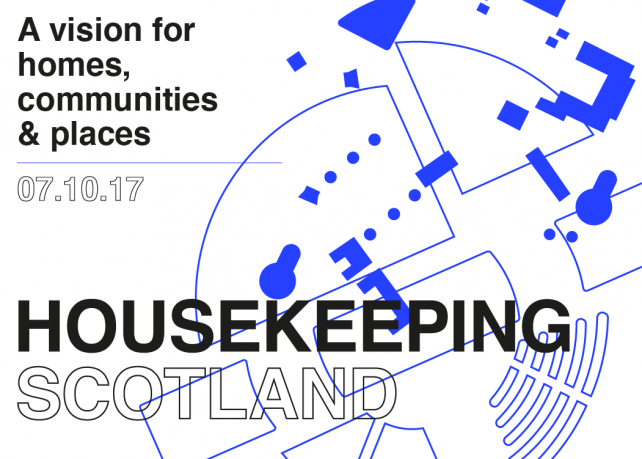 Architect Malcolm Fraser spoke at the Housekeeping Scoland convention in Glasgow on Saturday 7 October on a programme for housing renewal. Watch the video of his speech below , and read the piece below based on that speech, fleshing out the case for tackling the “overlapping omni-crises” in housing

THE much-decried Housing Crisis can be seen as a series of overlapping omni-crises, all characterised by a central, systemic failure that we’ve deepened by quick-fixes – as the sage said the biggest mistake we make is in trying to fix things before we’ve understood what’s wrong with them.  Here’s my attempt to understand our key failures and propose a programme of reform.

The first Crisis is in construction, as demonstrated so tragically at Grenfell but more prosaically in Scotland by the triumph of the timber kit house.  It’s a fundamentally flimsy construction, susceptible to rot from the vapour we all produce inside our homes; so we clad it in brick to make it appear sturdy, and dip the timber in toxic rot treatments and wrap our rooms in polythene to keep the moisture we produce out the walls.  Such fixes mean that unless we blow a gale through to fix things further we, effectively, live in poly-bags, with moisture, CO2 and particulates trapped inside with us, and increasing evidence that our health is suffering as a result.

We need to reform the way we build homes.  On a basic level, post-Grenfell, we need to stop building with toxic, incendiary materials.  And in Scotland we need to concentrate on using our abundant natural resources and modern forms of construction, building with solid timber offsite technologies (that also promote carbon-lock) and vapour-open construction that disperses moisture, CO2 and toxins.  I’ve used vapour-open construction for new Council Houses in Edinburgh (so it’s not as if it is prohibitively expensive) and I and other architects are promoting cross-laminated timber and other solid, offsite-constructed forms, but the industry needs regulation and financial incentive to convert it to this new, healthy form of modern vernacular.

“In Scotland we need to concentrate on using our abundant natural resources and modern forms of construction, building with solid timber technologies (that also promote carbon-lock) and vapour-open construction that disperses moisture, CO2 and toxins.”

So, my Construction Reform Programme:

.  build with materials that are: toxic; ignite; contain plastics; are vapour-closed; are not recyclable.

The second Crisis is in “Placemaking” – our contemporary term for building communities instead of rows of hutches.  If we are all agreed that the housing estates of the recent past are soulless and wasteful, we have again looked for quick fixes instead of fundamental reform, and turned to a Prince Charles-promoted idea that what we need is to make the roads a bit wiggly, and improve the pediments and other heritage features we fix to homes (what the volume housebuilders refer to, revealingly, as the “gob-ons”).  This changes little and, instead, I suggest we need to focus, as they did in the past, on the utilitarian aspects of placemaking.  The places of the past we (including the Royalists) tend to admire were built around achieving simple, objective advantages, like some common grazing land, a marketplace to buy and sell or a yard to keep a pig.  Instead of trying to make our hutches look more like those of people who led very different lives we should ask ourselves what advantages today.  So in the communities I’ve built I think about sunny gardens, big enough to kick a football around in, a village green to share a barbeque with our neighbours in or safe routes to shops and schools; and I press for reform of our Planning system which would place such simple, happy, utilitarian patterns at its heart.

“I suggest we need to focus, as they did in the past, on the utilitarian aspects of placemaking.  The places of the past we (including the Royalists) tend to admire were built around achieving simple, structural principles, like some common grazing land, a marketplace to buy and sell or a yard to keep a pig.”

My Placemaking Reform Programme for housing:

A Planning System based on Utility and Wellbeing:

.  a gradation of gathering spaces, from parks to village greens and sunny gardens;

The third and final Crisis I’m considering is in the finance and delivery of homes.  Here the crisis is an ideological one, based on successive Governments’ contempt for our social sector and their fanatical focus on enrichment for private corporates and indebtedness for us citizens as the only route for delivering the built environment.  It turns out, of course, that not everybody was ever going to get a mortgage, that the world economy was nearly crashed by such an ideologically-driven pursuit and that the private, corporate sector can in no way deliver enough homes for our needs (and that parts of it may not even want to, scarcity keeping profits high).  The effect of the crisis in provision on the U.K.’s wellbeing is staggering and best summarised, for me, by one statistic out of the ocean of failure: that Britain pays out £25 billion per year in Housing Benefit to private landlords.  That Government policy is to reduce this public burden by squeezing payments to those already in distress – rather than reducing it by building Council Homes to take people out of state-subsidised private rental – is the most evil and self-defeating of “quick-fixes”; but the general response to the crisis, such as its “Help to Buy” attempts to reflate the private bubble, avoid necessary reform while compounding the core failure.

“Here the crisis is an ideological one, based on successive Governments’ contempt for our social sector and their fanatical focus on enrichment for private corporates and indebtedness for us citizens as the only route to delivering the built environment.”

We need, desperately, to understand that the private sector needs expanded and supported by a revived public sector.  Most right-thinking people know this (and even the U.K. Prime Minister gives it the tiniest, most limited of nods) but there is a lack of a coordinated programme to give us the necessary levers.  There are, however, initiatives in Scotland which I am promoting as adding up to such a programme, with seven possible steps in my Finance and Delivery Reform programme we should take:

1.  Public Finance: the need for national investment – as opposed to the neoliberal Private Finance and PPP models that have so badly failed us – for all public infrastructure including public housing, with an accountable National Investment Bank and Company to direct financial partnerships with local authorities and others, has been promoted by the Common Weal and – wonderfully, hopefully – adopted as policy by the Scottish Government.

2.  Measures to ensure stalled or landbanked sites are developed: a Land Value Tax may be the best way to address this issue, with additional progressive positives.  Until such fundamental changes occur Compulsory Sales Orders (CSOs) are being advanced under Land Reform legislation.  They allow local authorities to compel land that has been bought and sold up to a level where its owners won’t return sufficient profit from building on it until the next housing bubble inflates, to be sold at auction, the market then adjusting to a buildable value which would ensure development.  The Land Reform Commission is advancing this proposal, which uses the power of capitalism – the market – in a positive, social way, and it appears that the Government will adopt it.

3.  Land Value Capture:  the biggest complaint throughout the housebuilding sector is the difficulty of funding public infrastructure – the roads, schools, health centres and public transport that communities need – as the existing Planning Gain (Section 75) system that is supposed to provide it is broken, ineffective and a brake on development.  But there is a hidden magic money tree in housebuilding, for the rise in value of land that the Planning system designates for housing is so great that, in Edinburgh alone, in the next 20 years, more than £8.6 billion is forecast to go to the landowners whose land is designated by the Planning system for this critical public need.  I am promoting work by the Centre for Progressive Capitalism and others which would adjust the laws governing public land acquisition so that public authorities could compulsory purchase redesignated land at existing use value – or, maybe, a bit more, as allow some profit – and borrow against the huge rise in value to fund the infrastructure first, allowing housebuilders to move faster but also local authorities to use funding to secure land for public housing, co-housing, self-build, intergenerational homes and other diverse and useful initiatives.

“There is a hidden magic money tree in housebuilding, for the rise in value of land that the Planning system designates for housing is so great that, in Edinburgh alone, in the next 20 years, more than £8.6 billion is forecast to go to the landowners whose land is designated by the Planning system for this critical public need.”

4.  Diversification of Private Supply:  we need public rental, as funded by national investment at 1, to provide more homes, to complement the volume housebuilder/mortgage/debt combination that it is clear will not fulfil our needs.  We should also diversify the ways we build, to expand the market and routes into the market, noting, for instance, low-cost continental models such as Collective Self-Build, which is an innovative, sharing form of commissioning and developing with lower debt/borrowing costs – conventional housebuilding carries the developer’s borrowing costs plus a householder mortgage while self-build only needs the mortgage.  It empowers local groups to obtain land and lead and commission design, resulting in more innovative architectural solutions than the market currently delivers.  Government is looking at new initiatives.

5.  Local Planning Leadership:  Planning is not working for communities and ongoing Reform initiatives need toughened to put the onus back on pro-active planning.  Initiatives such as CSOs and Land Value Capture will also allow local Authorities to identify land for diverse housing forms such as co-op and co-housing, self-build and intergenerational care homes.

6. Making Best Use of Our Existing Stock:  there are 34,000 empty homes across Scotland and we need to have Empty Homes Officers in every Local Authority, with programmes, finance and options to bring them back to use.  We also need good, new sheltered communities for the elderly and raised tax bands and an end to reduced rates for them, so persuading them to release family homes back into the market.  We also need to remove the grotesque VAT imbalance where repair is charged at 20% and demolition and rebuild zero-rated, with VAT levelled at, I suggest, 5% across all residential.  This would repair or recover huge numbers of homes as well as create employment, reduce VAT evasion by small builders, cut red tape and improve sustainability and persuade the volume housebuilders to become “volume house-repairers” too.

7. Leadership:  in all the above there is much good practice in Scotland that is not sufficiently shared and we need a re-defined, beefed-up and re-launched Scottish Government Homes Division and Public Investment Company and the introduction of an Infrastructure Commissioner, or strengthening of the Roads Commissioner, to co-ordinate and activate utility bodies.

The above seven steps, taken together, would radically improve the supply and delivery of housing, shifting the balance back into the public realm and strengthening the powers, finance and responsibility of communities and their public sector.  Taken alongside my proposals to reform construction and placemaking they would deliver Scotland a reinvigorating and radical new housing revolution.