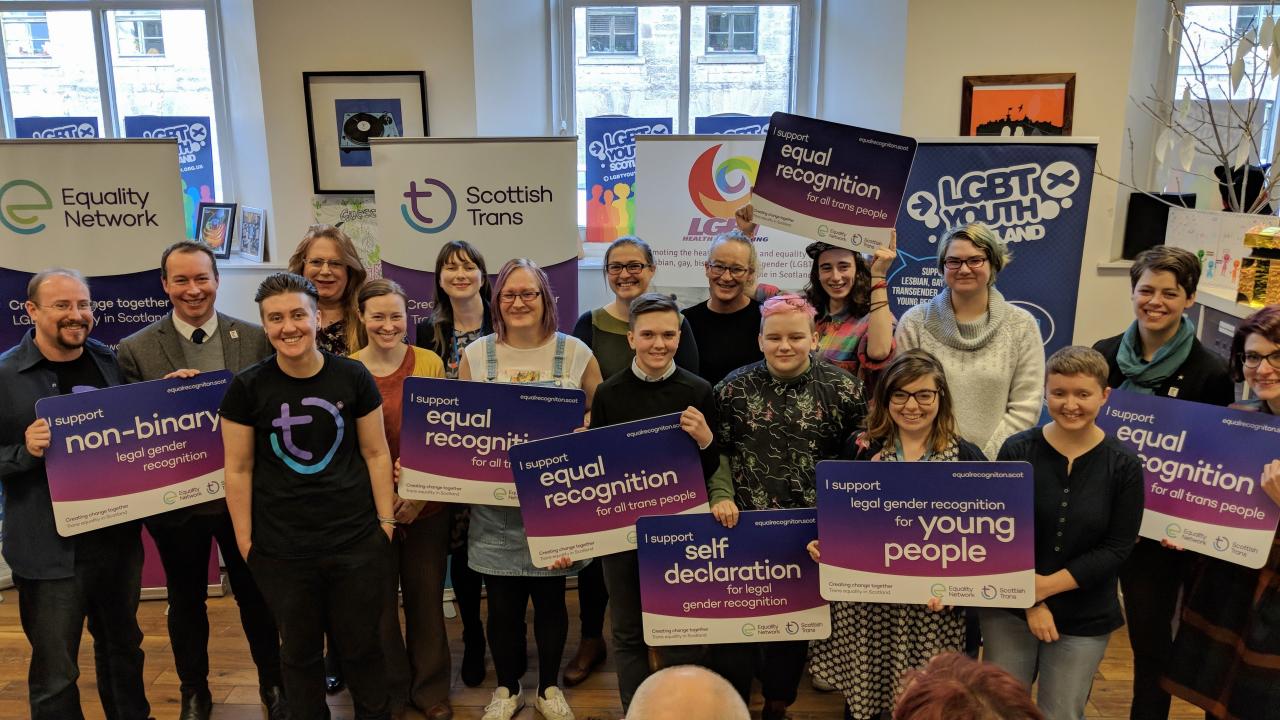 NATIONAL CHARITIES LGBT Youth Scotland and Scottish Trans Alliance, along with the national youth commission on gender recognition, say that the proposed changes to the Gender Recognition Act could be vital for young people, but that misconceptions are impairing the debate.

Speaking to CommonSpace, Policy and Research Manager at LGBT Youth Scotland Brandi Lee Lough Dennell said she had concerns that “malicious misinformation” which was apparent in some media coverage or online discussion of the issue could have a negative impact on trans young people.

“When young people see negative depictions seemingly picked up by family, employers, MSPs, whoever, even if it’s one person shouting loudly and it’s not challenged, this has an impact,” she said.

LGBT Youth Scotland has been gathering the views of young people through the LGBT Youth Commission on Gender Recognition, which was established last year as a national youth participation project, and through consultation across its youth groups and online.

One member of the youth commission, Cameron Goymer, told CommonSpace why he supports the changes: “There are three main asks in the campaign, which are about self-determination, non binary identity, and people under 18.

“At the time of the consultation launch I was 17, so that was a key aspect for me, but even now that I’m 18 I have to give evidence to a panel for two years before I can get a gender recognition certificate.”

Goymer said that there was inconsistency in the requirements to change different personal documents. “Other documents such as passports, driver’s licences and medical records are on a self-declaration process – so some are and some aren’t,” he said.

James Morton, manager of the Scottish Trans Alliance told CommonSpace that the organisation supports the age reduction as a matter of human rights.

“The European Court of Human Rights ruled that changing the gender on a trans person’s birth certificate is necessary in order to uphold their human right to privacy about their gender history,” he said.

Morton added: “Young trans people are entitled to the same human rights as adults so having your old details revealed against your wishes by an unchanged birth certificate is just as unacceptable whether you are thirteen or thirty.”

Lough Dennell said that a key point being raised with LGBT Youth Scotland by young people who want the age lowered to 16 was that they could be married and have a job at that age, but that they are “not able to do so with their gender legally recognised”.

“Young people will have been out and living in their true gender for many years before they’re 18 and therefore old enough to apply,” she added.

However, she said, the circulation of misinformation on the issue may be causing confusion over what the legal changes would mean, which she said could be “damaging to public perceptions and understanding”.

Lough Dennell said that the organisation’s new report, which found that 100 per cent of trans young people reported experiencing mental health problems such as depression and anxiety and that 82 per cent had been bullied in school, made clear that more positive representation and inclusion of trans young people is needed.

Goymer said that he had also been concerned by some of the framing of the issue and that he had firsthand experience of this.

“Any changes to the Gender Recognition Act are not going to change how people are already identifying.” Brandi Lee Lough Dennell, LGBT Youth Scotland

Negative and “tabloidy” press around trans people is so common, he said, that he now feels “used to it”.

One of the most common misconceptions, Goymer said, was that the proposed legal changes are directly linked to medical transition. “People assume that to be legally seen as a gender different than the one assigned at birth, you must’ve undergone some sort of medical treatment to change,” he said.

“In reality the only requirements to obtain a gender recognition certificate are that you are over 18, diagnosed and have well documented gender dysphoria alongside evidence of living full time for two years, and two medical reports – one from a specialist.”

The reforms to the Gender Recognition Act, he explained, would not change the current provision of medical transitions for under 18s: “In both Scotland and the UK, the only medical intervention a young person under the age of 16 is hormone blockers.

“At the age of 16 someone can go onto hormone replacement therapy and at 18 undergo any surgery.

Lough Dennell also emphasised that this was an area around which misunderstanding had developed, and noted that the Gender Recognition Act “has nothing to do with surgery” and that the age at which any medical intervention is available would not change.

“Any changes to the Gender Recognition Act are not going to change how people are already identifying”, she added.

James Morton elaborated: “A young person’s birth certificate would only be changed after they’d already changed their name, pronouns and gender in daily life and on their school records.

“Therefore, it would not affect the timing or likelihood of a young person transitioning. It is purely a fully-reversible change to text on a piece of paperwork.”

Goymer said he felt that “one-sided” information in relation to the reforms had led to confusion on this and other issues which will not be affected by the legislation. Another example he gave was the idea that the changes would “put women and women’s spaces at risk”.

On the contrary, he said: “Almost all women’s charities in Scotland have come out to support changes to Gender Recognition Act and support self-identification for their services. It’s not about taking one privilege away from another person.”

Lough Dennell reiterated that “women only services have been operating on the basis of self declaration for years”, and that while gender reassignment is a protected characteristic under the Equality Act, the Gender Recognition Act does not affect this.

She further emphasised that their experience as an LGBT organisation working with the gender based violence sector had been very positive, to the point that LGBT Youth Scotland has updated its own guidance to keep up with the practice of these organisations.

Lough Dennell added that the organisation has a strong focus on working to end gender based violence as well as LGBT discrimination and inequality, for the exact reason that it sees these issues as interlinked. “At the root of it, gender inequality, transphobia, homophobia and biphobia are all rooted in sexism,” she said.

“Gender roles are restricted to boxes which people must stick to, and if they don’t they will face discrimination, prejudice or gender based violence.”

The reforms to the Gender Recognition Act, she said, by allowing non-binary gender recognition and self-declaration, would represent one step towards moving beyond this.