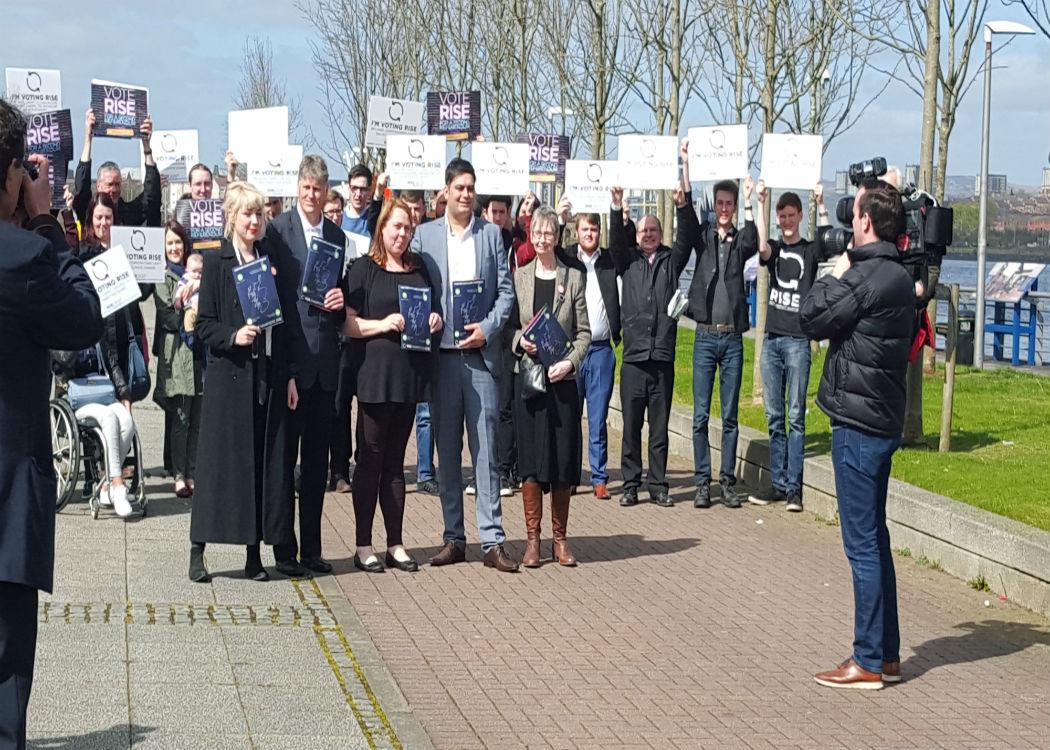 THE LEFTWING electoral alliance Rise has launched its manifesto for the 2016 Scottish elections with a call to empower Holyrood to hold a second independence referendum within the term of the next parliament.

The demand was made at the nine-months-old left alliance’s manifesto unveiling at the Glasgow Science Centre by outgoing independent Highlands and Islands MSP Jean Urquhart and former SSP MSP Colin Fox.

Launching the 30-page document, and focusing on Rise’s policy of pursuing a mandate for the Scottish Parliament to hold a referendum without agreement from Westminster, Fox said: “Scotland’s worst kept secret is out. The SNP won’t commit to a second independence referendum in their manifesto for the next parliament.

“Nicola Sturgeon says the people of Scotland will decide the time of a referendum, but they cant. Currently that power lies with Westminster.” Colin Fox

“Nicola Sturgeon says the people of Scotland will decide the time of a referendum, but they cant. Currently that power lies with Westminster.

“If elected, Rise MSPs will immediately table a motion for the Scottish Parliament to give itself the power to hold an independence referendum at a time of its choosing, and we will campaign to win that referendum within the lifetime of the next parliament.”

First Minister Nicola Sturgeon recently confirmed that the SNP’s election manifesto, due to be launched tomorrow (20 April) would not include a commitment to a second referendum .

Urquhart, who left the SNP in 2012 over its adoption of support for the Nato military alliance, said she believed that the Scottish Greens would not prioritise independence highly enough, prompting her to join Rise.

She said: “It would have been easy for me to join the Greens. But for me, the party of independence is Rise.

“We must keep independence on the agenda. That is our first task. The greens won’t do that.” Jean Urquhart

“We must keep independence on the agenda. That is our first task. The Greens won’t do that.”

She said:”The great scandal of our age is corrupt capitalism. We are not afraid to challenge it.

“Our challenge to every other party is, will you call-out the Ian Woods and Brian Souters who are lauded in Scottish politics?

The manifesto launched several radical redistributive tax policies, including an income basd replacement for the controversial council tax and two new income tax bands – a new 60p rate for earnings over PS150,000 and a new 40p band starting at PS50,000.

“Our challenge to every other party is, will you call-out the Ian Woods and Brian Souters who are lauded in Scottish politics?” Cat Boyd

However, there was embarrassment for the new coalition when BBC Scotland’s Andrew Kerr noted that the new middle band was based on a mistake in the manifesto, which stated that the 40p rate currently starts from PS32,000 rather than its actual starting income of PS43,000. Rise organiser Jonathon Shafi, who was hosting the launch, accepted the error.

The manifesto represented the most leftwing policy prospectus of any of the parties running in the Scottish elections, including an anti-sexism bill that will outlaw hate speech aimed at women, a pledge to build 100,000 new council houses and a land reform “revolution” with caps on landholdings and a crackdown of land owned in tax havens.

Rise was launched in August 2015 as an alliance of pro-independence socialists including leading figures from the RIC and the Scottish Socialist Party.

Shafi told the audience of supporters and press that Rise were campaigning to win a seat in every region in Scotland.

CommonSpace journalism is completely free from the influence of advertisers and is only possible with your continued support. Please contribute a monthly amount towards our costs . Build the Scotland you want to live in – support our new media