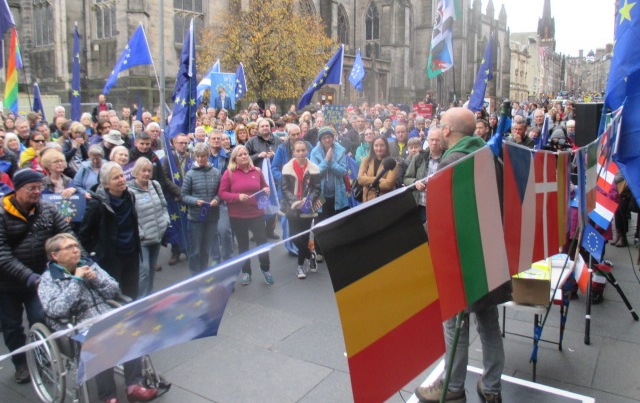 “Scotland never wanted Brexit, and we will be noisy about it until our voices are listened to.” Vanessa Glynn, European Movement in Scotland

The event forms part of a UK-wide series of rallies taking place over the same weekend in Leeds, Newcastle, Exeter and elsewhere.

Vanessa Glynn, chair of the European Movement in Scotland commented ahead of the march: “It is important that the anniversary of the Article 50 notification, looming just days after the event, doesn’t pass without notice. Scotland never wanted Brexit, and we will be noisy about it until our voices are listened to.

“Every week, a new reason for Britain to be in the EU emerges. The recent events in Salisbury are one example: it was our EU partners who stood up for Britain, while the United States proved an unresponsive partner.

“In an ever colder world, it would be ludicrous to turn our backs on our best friends. We belong in the European family, and we stand ready to show it.”

Edinburgh, where the rally is to take place, voted to remain in the EU by 74 per cent – the highest proportion for the ‘remain’ vote of any major city. Every local authority in Scotland voted in the majority to stay in the EU, with 62 per cent of Scotland overall voting to remain.

Explaining why the organisers feel that a vote on the final deal is necessary, President of Young European Movement UK Juuso Järviniemi said: “The Brexit deal will be Britain’s most significant international agreement in living memory. A pig in the poke is no basis for that.

“It is entirely justified to ask the people what they think of the deal. Democracy did not cease in 2016.”

The campaigners are urging people, regardless of their vote in the EU referendum, to support their call for a second vote in light of the “shambles” which has emerged around Brexit, and point to the UK Government’s minority status as evidence that the voice of the public is being ignored.

The march on Saturday will start at 2pm. The rally will also feature music from Madeleina Kay, an English writer, activist and musician known as ‘EU Super Girl’ because she appears dressed in costume as part of a statement that the UK needs a super hero to save it from Brexit.