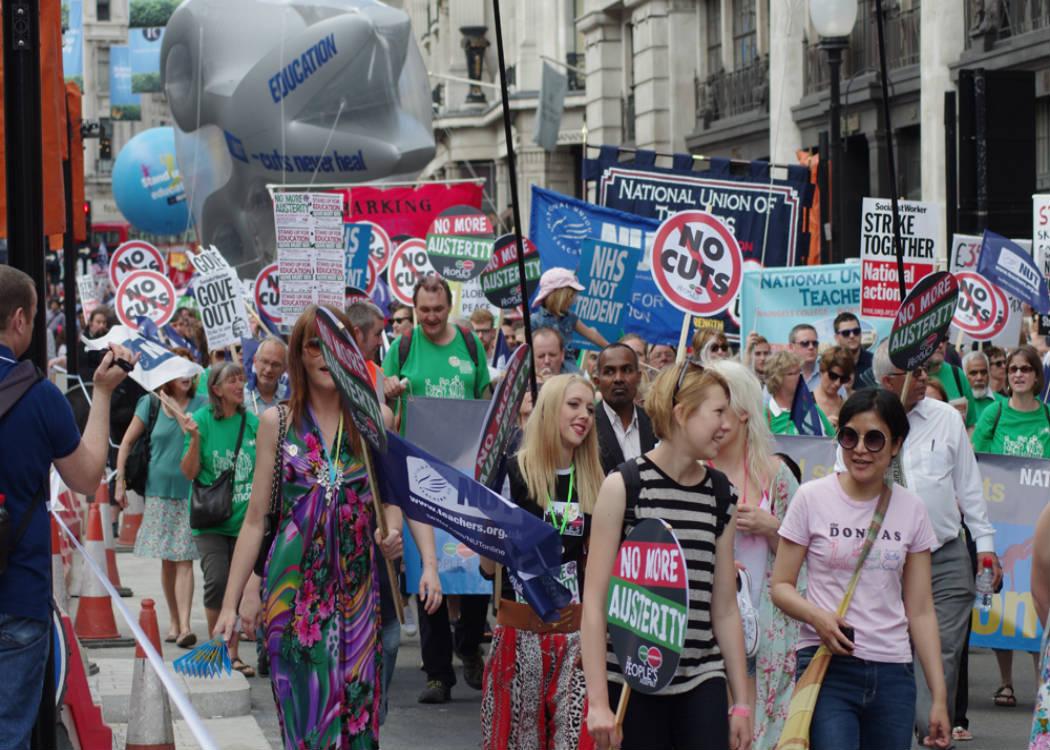 Ben Wray speaks to a disability rights activist, an anti-cuts campaign co-ordinator and a trade union organiser and asks them: how can you stop the new majority Tory Government’s austerity drive?

CAMPAIGNERS are readying themselves for drastic cuts to public services and attacks on workers’ rights from the new Tory government, and are formulating strategy and tactics to build a meaningful, powerful resistance.

John McArdle is an organiser for the Black Triangle Campaign, a direct action disability rights group in Scotland, and has organised a day of protest in George Square, Glasgow, on 14 June against benefit cuts. (Click here to read more).

“Before the General Election the Tories tried to keep what they would cut secret, but just hours after the Tories had won the DWP released a document about plans to cut a scheme to help disabled people into work,” McArdle says.

“People are absolutely terrified, we didn’t think it could get any worse, we didn’t envisage Labour would lose – and they’ve lost because they’re completely spineless.” John McArdle

A DWP impact assessment was released the day after the election, which stated: “[Spending] has risen significantly over the past five years… One of the significant strategic questions we face is how to establish the right balance between the need to support as many disabled people as possible and what it is reasonable to offer individual users.”

The first option the document offers is “to set a cap on the maximum value of support per user”.

It’s an example of what many activists see as the cruelty of the Tory government, attacking the most vulnerable in society, and McArdle is pained by the suffering he has seen from cuts to disability benefits under the Tory-Lib Dem coalition government.

“People I know have committed suicide, it has been absolutely terrible. You wouldn’t think you could cut anymore,” he says.

McArdle, like the rest of the country, was taken by surprise by the Conservative government’s majority win at the election, as he and other activists had been gearing themselves up for trying to pressure a possible Labour minority government.

“People are absolutely terrified, we didn’t think it could get any worse, we didn’t envisage Labour would lose – and they’ve lost because they’re completely spineless,” McArdle exclaims.

The demonstration has already garnered significant backing on Facebook, and McArdle has a strategy for how he plans to use it to wedge influence upon the government.

“I’m going to try and get Nicola Sturgeon to turn up to the demonstration, and tell her she has to put an end to cuts – we want to influence the SNP and get them to really stand up and fight.”

Many campaigners worried about austerity may have a similar plan in mind. The SNP’s unprecedented influence at Westminster with 56 MPs means the party has become the guardian of hope and expectation for those like McArdle who have grown exasperated by the inability of grassroots campaigns to put a dent in the Tory’s ambitions over the past five years.

“I’ve joined the SNP because I want to get them to fight, that’s what they’ve been elected for,” he adds.

“I’ve been to a lot of these demonstrations before but this time we need to take civil disobedience – we need to sit outside parliament and say we’re not going until something’s done to put an end to this.” John McArdle

However, the SNP’s MPs may find it difficult to change the direction of the Tories. They don’t have the numbers and, David Cameron’s slim majority means he has to keep the radical right of his party on board, who have not got any truck with giving concessions to those north of the border.

McArdle believes that if that turns out to be the case it’s up to the grassroots campaigns to find a way to shift the political context.

“I’m going down to the People’s Assembly march on 20 June in London,” McArdle says. “I’ve been to a lot of these demonstrations before but this time we need to take civil disobedience – we just need to sit ourselves down outside the parliament and say we’re not going until something’s done to put an end to this.”

Forty-five thousand people have signed the People’s Assembly’s pledge to join their demonstration against austerity on 20 June, demanding that the government ends austerity now, and activists have reported big increases in numbers attending meetings across the UK in preparation.

John Rees, one of the co-ordinators of the People’s Assembly, says that the demonstration would be “critical” to building an effective movement against austerity.

“This demonstration is critical to the possibility of opposition to what is obviously going to be an authoritarian Tory administration,” Rees says.

“Tens of thousands have been joining the Facebook group every day and those saying they are coming number over 55,000 – and that’s more than a month before the event. Coaches are being booked on the scale that only the big anti-war demos could equal.”

Rees added that the movement in Scotland should link up with those in England to take on the “common enemy”.

“Scots should flood south in their tens of thousands. We have a common enemy and we need to unite to beat them. I guarantee there will never have been a warmer welcome in London,” he said.

“Coaches are being booked on the scale that only the big anti-war demos could equal.” John Rees, People’s Assembly

One of those who has taken the eight hour coach trip to many demonstrations in London from Glasgow over the years is Cat Boyd, a trade union activist and supporter of the Radical Independence Campaign, which on Wednesday [13 May] issued a 10-point plan for resisting the new Tory Government (click here to read more).

One of the points proposed is to “actively mobilise support and assistance for any union that breaks the coming anti-strike laws”, referring to the new proposals that will be announced in the Queen’s Speech on 27 May to make it harder for trade unions to take strike action, and Boyd believes the move is part of a calculated effort “to destroy our trade union movement”.

“They will try to finish off the job that Thatcher started,” she adds. “Of course the trade union movement has its problems, but these are exacerbated by what are currently some of the most restrictive anti-labour laws in Europe.”

Boyd believes the fight to defend trade union rights is crucial to the wider anti-austerity movement having any chance of pushing back the Tories’ plans.

“The trade unions aren’t simply bodies which bargain for a few more pounds and pence in our pay packets – they are still the best democratic institutions through which working class people can challenge alienation. The fight against alienation is the core of the trade union struggle,” she says.

Boyd sees the possibility of a powerful fusion developing between the independence movement and the trade union movement that could put up a fight against Cameron’s government.

“Over the last two years, the people of Scotland revolted against alienation, 1.6 million votingYyes, not out of patriotism, out of hope for an alternative to austerity,” Boyd argues.

“There is now an opportunity for the left wing pro-independence movement to work even closer with the trade unions to fight the coming attacks on democracy.”

“The task for trade unionists today is to ensure that we can have an effective political struggle in Scotland and across the UK – it’s the only route to dignity,” she adds.

“Over the last two years, the people of Scotland revolted against alienation, 1.6 million voting Yes, not out of patriotism, out of hope for an alternative to austerity.” Cat Boyd, trade union activist

The last five years of the coalition government saw the biggest fall in living standards in over a century, but the pinnacle of trade union resistance was a strike in November 2011, when upwards of two million people walked out across the public-sector against attacks on pensions.

But the strike ended with a whimper, as the main unions came to a deal with the government that was widely seen to be much closer to the government’s position than the unions’.

What could be different this time? Boyd believes that if the Tories do pass the new ‘anti-trade union laws’ – which would see a threshold of 40 per cent of all workers, regardless if they voted or not, needed for a strike to go ahead – it will be necessary for the trade union movement to rediscover a radical, even law breaking, edge.

“Workers fighting back in the dockyards, in the Bryant and May match factory and the Becktonn gas works in the 19th century, when workers broke the law, and fought the establishment to transform the economic and political landscape for ordinary people,” Boyd says.

“Those are important lessons to draw on in these dark times. We must be prepared to break the law and fight this government down.”

Boyd made the case for law breaking at the STUC’s May Day rally, and was backed up by the STUC general secretary Grahame Smith, who said: “If the Tory anti-union proposals come to pass they will be resisted.

“We must be prepared to break the law and fight this government down.” Cat Boyd

“We would not be standing here today if it wasn’t for our predecessors who resisted and broke bad laws, and if that’s what it takes to ensure that we can continue to effectively represent our members and our class, then so be it.”

For those at the very top of the trade union movement in Scotland to be talking up illegal strikes may provide an insight in to the extent to which the future of not just public services but the most basic rights of ordinary people to defend themselves and effect change is on the line.

They will be coming up against a government which believes it has more right than ever before to impose whichever agenda it sees fit. It may be a recipe for fireworks – watch this space.