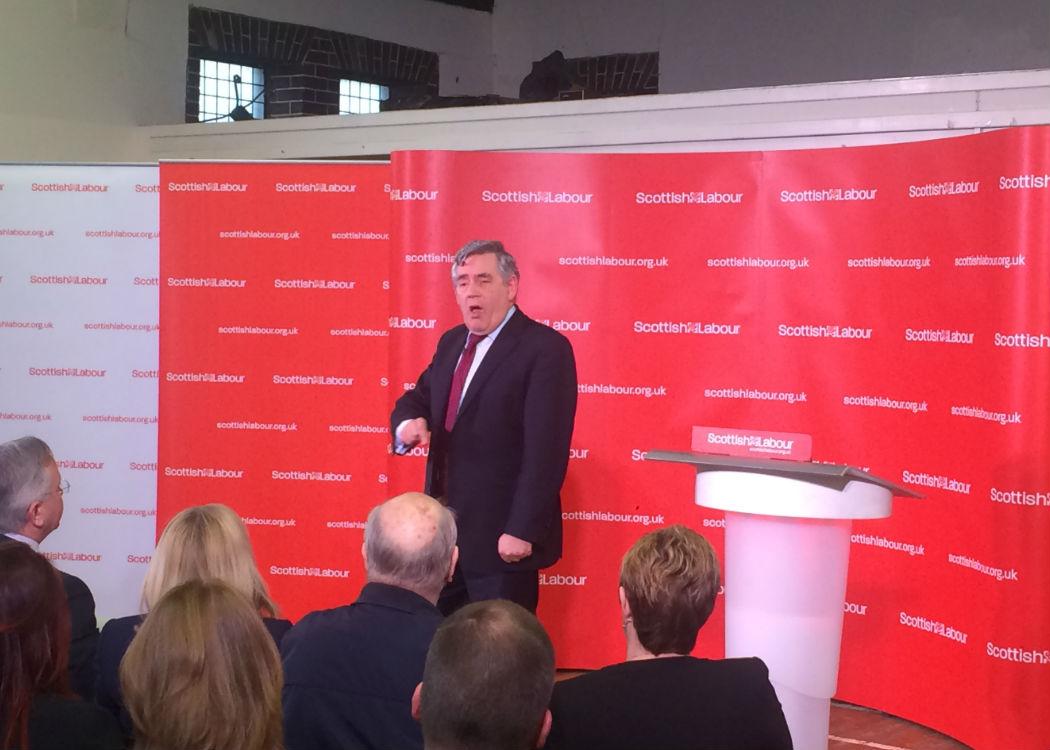 GORDON BROWN went on the attack over SNP spending plans as he joined Labour’s Margaret Curran in Glasgow on Monday to launch the campaign to save her seat.

As the Westminster parliament was dissolved on Monday, the starting guns have been fired on the respective campaigns up and down the country as the countdown to the 7 May General Election begins.

Despite winning in 2010 with over 60 per cent of the vote, Curran currently trails the SNP’s Natalie McGarry by seven points in the constituency, replicating a uniform swing to the nationalists that is taking place all over Scotland.

There have been reports that some in Labour have already given up on hopes of retaining the seat amid talk of ‘abandoning’ Glasgow for areas of Scotland which voted ‘No’ in the referendum and are more likely to re-elect unionists politicians .

However, the arrival of Brown seemed to suggest Curran has been successful in using her considerable influence in the party to keep focus and resources on her campaign.

In his speech, Brown was on the offensive. Pacing up and down the floor in front of a small number of Labour activists, he launched a tirade against the SNP and its spending plans.

Declaring that he had “discovered” a Treasury document which showed that the SNP would not increase UK public spending over the next financial year, Brown called this proof of a “Tory SNP zero spend sell out”.

Brown was referring to a public document created by the SNP and the Treasury which outlined the party’s plans to reverse austerity and invest PS180bn over the length of the next UK parliament.

Brown called the lack of an increase in spending plan for 2015-2016 evidence that the SNP will act as “the willing accomplices of Tory austerity” and said that Labour would invest an extra PS800m in Scotland if re-elected.

Curran’s opponent, Natalie McGarry – who launched her own campaign with First Minister Nicola Sturgeon – said from her campaign headquarters just a short walk away from Curran’s campaign launch that the arrival of Brown was not a cause for concern.

“Margaret Curran is pulling in favours but Gordon Brown is not going to save the Labour party in Glasgow East because people feel that they’ve been neglected by their politicians for far too long. The level of neglect, inequality, drug misuse in this area should make anyone hang their heads in shame.

“People here know that they haven’t had a strong voice for many years and no matter how many visits of high profile people you have to the constituency in attempt to save their political career, its not going to change the fact that people know the Labour party has let them down.”

Responding directly to Brown’s attack on SNP spending plans, McGarry said that Brown struck a different note from Shadow Chancellor Ed Balls who will be the one making the economic decisions in the event of a Labour government.

“Ed Balls was recently talking about the budget in a way that suggested he wouldn’t reverse any decisions made by George Osborne.” she said. “If Labour get into government, it will be Ed Balls putting the economic plans in place, not Gordon Brown.

“After parliament was dissolved today, Gordon has no responsibilities anymore and Margaret Curran is now an ex-MP. We’ll be working very hard to make sure she stays that way.”