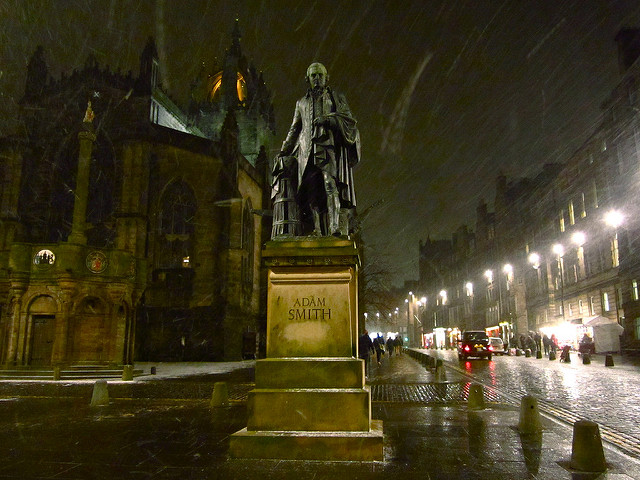 A LEADING Scottish economist has warned that it is “very likely” that the Scottish economy will “soon” re-enter recession as Brexit inflation impacts on a fundamentally weak UK economy.

Former OECD economist Margaret Cuthbert, who has lectured in economics at universities across Scotland, told an audience at a debate hosted by the Scottish Socialist Voice pro-independence newspaper that Scotland’s economy remained weaker than the UK economic average – which is already struggling with structural weaknesses.

She said: “What we do know is that we are not doing as well as the rest of the UK. Our latest growth up to the latest figures we have was 1.4 per cent less than the UK.

“We do know that the growth rate across the UK was only 1.8 per cent on average across the last three quarters of the year. Given that we were 1.4 per cent below that on average tells you we are not doing very well at all.

“Scotland is not necessarily in recession yet, but very likely to be so soon.” Margaret Cuthbert

“Scotland is not necessarily in recession yet, but very likely to be so soon.”

Speaking about economic conditions across the UK, which is the only major western European economy not to see an improvement in incomes during recovery from the 2008 crash, Cuthbert noted worsening indicators.

“What’s more important, our livings standards are dropping considerably,” she said. “Household savings rates are at their lowest level for a very, very long time.

“We’re not saving. We are not earning as much money as we would hope for and prices are rising and we’ve got big problems with the growth rate.”

Cuthbert attributed some of these problems to Brexit, including inflation.

“Since then we’ve had a decrease in the value of Sterling, and increase in inflation so we’ve had declining real earnings. And assets that we’ve got are of less value.”

She noted though that turbulence from Brexit was impacting an already weakened economy where falling incomes were being offset by the growth of credit.

“That growth that we have had has been driven by household spending funded to a large extent by credit cards,” she said.

She also noted that foreign ownership was a major problem for the Scottish economy.

“We badly need to revamp our economy and change it,” she said.

“We’re not saving. We are not earning as much money as we would hope for and prices are rising and we’ve got big problems with the growth rate.” Margaret Cuthbert

In the meeting, brought together to disccus left perspectives on the future of Scottish politics and society in the wake of the General Election, Cuthbert also said that ascertaining the exact state of the Scottish economy had become difficult, because non-departmental economic organisations, including the Scottish Futures Trust, had “mushroomed” in recent years and that too many capital projects had been contracted to large foreign corporations.

Rowley said that Labour’s 2017 General Election manifesto pointed the way for Scotland to deal with its economic problems, but that this could only be achieved through radical change.

He also said more money had to be invested in “frontline teaching”.

“If we are going to irradicate poverty, we need to see major investment in education,” he added.

Neil said that an innovative approach to the Scottish economy was necessary, inluding a citizens basic income to deal with the threat of job losses due to automation.

Margaret Cuthbert: What the GERS and Brexit reports tell us about Scotland’s economy

He said Scotland would be “losing out big style” if the country doesn’t see the opportunities created by North Sea decommissioning “not just over the next 15 years, but over the next 50”.

Neil, who was Scottish minister for social justice between 2014-16, also agreed there needed to be a move away from the Scottish economy’s dependence on foreign ownership and investment.

He said: “There needs to be a fundamental shift of industrial policy in Scotland.

“We’ve relied to much on trying to beg, steal and borrow investment from outside Scotland. It is hight time we grew the indigenous base we require to create the jobs and wealth of tomorrow.”

The Fraser of Allander Institute has warned that Scotland could lose 80,000 jobs due to Brexit.