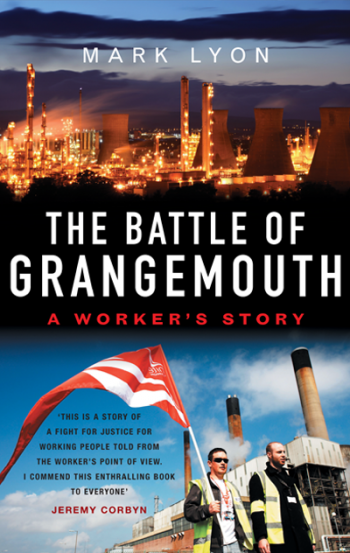 CommonSpace’s David Thomson spoke to Mark Lyon after a fringe meeting at the Labour party conference in Brighton where he was discussing his book, The Battle of Grangemouth: A Worker’s Story

A FORMER UNION CONVENOR at the Ineos plant in Grangemouth is calling for an inquiry to look into what happened at the plant in 2013.

Mark Lyon – who worked at the Grangemouth petrochemical plant for over 20 years – has written a book describing his own experiences of the epic struggle between the union and the owners.

Lyon was the UK vice-president of Unite and was the on-site convenor when an industrial action and shutdown took place four years ago.

Lyon spoke to the CommonSpace after a fringe meeting at the Labour party conference in Brighton, where he was discussing his book – The Battle of Grangemouth: A Worker’s Story – and said legislation is also needed to ensure “governments have power over the situation rather than big corporations and multinationals”.

“We need to be looking at information requests to show whether collusion has taken place.“ Mark Lyon

Lyon added: “Obviously, the interests of the multinational lie with nobody else except the multinational, whereas we should have an honest broker in terms of the government coming in to sort that out and make sure that situation can’t happen again. So, I would like to see an inquiry, first of all, to look exactly into what happened.”

The Grangemouth plant was at a centre of a dispute in 2013 that led Ineos to threaten to close part of the site if its workers did not agree on a rescue package to help secure its future.

The row began after Unite threatened to strike over the suspension of former union convenor, Stevie Deans, who was suspended by Ineos over claims he did political work on company time. Deans was also the chair of the Falkirk Labour party, which was embroiled in a dispute over claims that Unite tries to influence the selection of a parliamentary candidate. However, the union eventually decided to accept Ineos proposals around changes in pay, pensions and conditions, resulting in Deans quitting his job.

An internal report was drawn up by the party – one which Unite disputes – which led to the Labour leader Ed Miliband announcing reforms of the historical link between the party and the unions.

Lyon stated that both Scottish Parliament and Westminster committees should be looking at what happened at the plant in the first instance.

He said: “We need to be looking at information requests to show whether collusion has taken place.

“We should have an honest broker in terms of the government coming in to sort that out and make sure that situation can’t happen again.” Mark Lyon

“Neil Findlay [MSP] made a request for information on meetings that took place with the SNP and Ratcliffe [Jim Ratcliffe, Ineos founder], and there was something like 17 meetings had taken place over quite a short period of time.

“That’s access to government that we don’t get. That would be a starting point. What has actually happened? How were their books presented? Was that accurate? They should be made to show their books to our members and go from there. They should redress the men and women who are working in there.”

Lyon was fired by Ineos in February 2014 after claims that he could not stop the union from commenting over fears of job losses at the Grangemouth plant.

Unite claimed at the time that Lyon was “tried in his absence” due to the fact that he was suffering from stress-related illness as a result of what he had “endured” as a consequence of the treatment he had received at the hands of plant owners, Ineos.

Unite’s Scottish secretary, Pat Rafferty, at the time said that Lyon was “hounded out of his job by Ineos”.

In Lyon’s book, he states that he firmly blames the long-term damage done to the plant, local community and the wider Scottish and UK economy “lies fairly and squarely with Jim Ratcliffe’s Ineos”.

He wrote: “It is lunacy to allow a single company – let alone an organisation effectively run by one man, with sole custody of decision-making – to control nationally important assets such as the Grangemouth complex.”