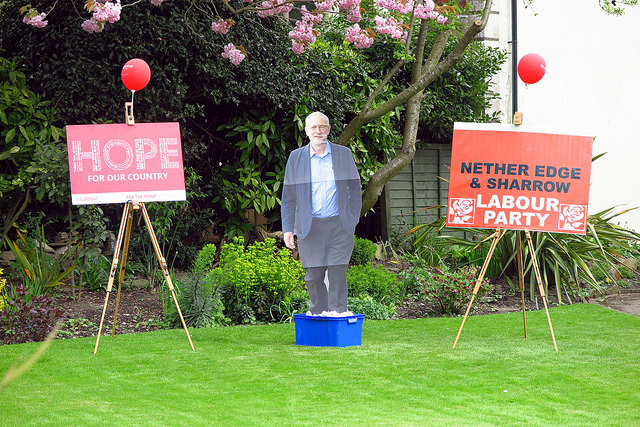 Mark Scott, blogger at The English left, argues that the MPs who have split from Labour is just the latest futile attempt by the ‘extreme centre’ to reassert control

SKELF: a word for those irritating, jaggy wee bits of wood you get stuck in your finger when climbing fences as a wean. Although they got under your skin, they remained insignificant when pulled out.

The Labour Skelfs are an interesting bunch of privatisers, war mongers, expenses fiddlers and austerity enablers. The only thing they want to bring down is Jeremy Corbyn’s leadership and the mass movement that has been galvanising since 2015.

Of course, we all know what the naysayers and centrist dads will be saying now: compromise, change leader, ‘People’s Vote’ etc etc. ‎Oversimplified solutions for the complicated climate of British politics in 2019.

Since coming to power, Corbyn has done nothing but try to build bridges, only to have this good will chucked back in his face. Who can forget the infamous ‘Chicken Coup’ when half the shadow cabinet resigned to embarrass and undermine his leadership?

ANALYSIS: The Independent Group isn’t about changing politics – it’s about turning back the clock

We know Corbyn is a man of peace. He has built his career on olive branches and doves – fighting injustice whilst advocating non violent direct action, speaking with people considered terrorists whilst denouncing bombs and wars. Those in the New Labour old guard have exploited his mellow nature. Had the authoritarian Blair been at the helm, he would have expelled detractors without just reasoning.

Corbyn is the antithesis of New Labour’s tyrannical regime, a leader open to debate and ideas. Sadly, the Tired Blair Project is still alive and well within many facets of the Labour operation and whilst the Parliamentary Labour Party have been shouting at Jeremy, many of the Constituent Labour branches have been shutting down new members with their creative use of the rulebook.

Corbyn supporters have had years of bureaucracy thrown in their face when trying to affect positive, progressive change. It’s immensely off putting to have tedious meetings (often stretching to four hours long) about structure and regulation when all members want to talk about is helping the local foodbank or organising against Tory cuts. Unfortunately, the Labour Party has more than enough bureaucrats who are willing to dampen enthusiasm.

When the rulebook hasn’t been enough and slagging the policies gained little traction, anti-Semitism has stuck. Anti-Semitism is undeniably on the rise across Europe and it is absolutely vile. Any decent person should do all they can to challenge and smash it, wherever it is found. However, for it to be continuously used against a man who has fought bigotry his whole life is abhorrent. Furthermore, for it to be used when other motives w‎ere in play is downright wrong and misleading.

How interesting that the three Tory exiteers were all female. If the same had been true of the former Labour MPS then claims of sexism, misogyny and toxic masculinity would be thrown at Corbyn by the mainstream media. The same ‎MSM who are obsessed with the notion that this is a one man show. Rid Labour of Corbyn’s leadership and we can bask in the glory days of Blairism and Cameronism.

How wrong they are. This is a mass movement. There are a number of shadow front benchers who are ready and able to take Corbyn’s place to continue with the policies enshrined in the last manifesto. Rebecca Long-Bailey‎, Angela Rayner and Dawn Butler are three such names which spring to mind. Forward thinking, intelligent women with a commitment to socialism.

The days of the extreme centre and their failed thesis are over. Just look at France, where Macron’s third way has been an unmitigated disaster, deepening divisions as opposed to healing them.

So where does all this leave Scotland? Same same, I would say. The extreme centre isn’t an issue as every party sitting in Holyrood is bouncing around the centre left to centre right. The two party stranglehold has been broken and the Scottish electorate is in a position, in terms of Holyrood, to vote as far left or right as they wish thanks to the proportional list system.

Nothing has really changed either in terms of Brexit, it seems it will be a No Deal with Scotland’s voice remaining excluded. There are no signs that any Scottish MPs will defect to the Independent Group as it seems irrelevant to the political landscape north of the border. Whether this makes independence closer or easier is anyone’s guess. However, there’s no doubt that the implosion of the British political establishment can only help the cause.