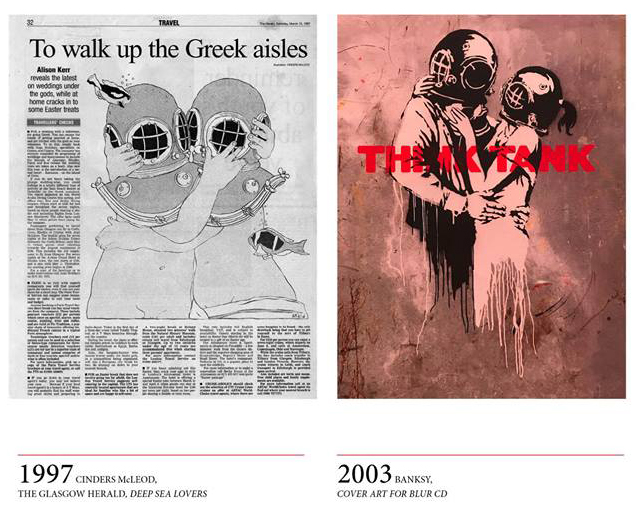 BANKSY, perhaps the most famous graffiti artist in the world, appears to have been inspired by a number of original images created by a fellow artist, Cinders McLeod, which she created for the Glasgow Herald during the late nineties and early noughties.

McLeod herself spotted the resemblance at a show in Toronto, The Art of Banksy. Third in line, she was so excited, she raced into the space and was the first person to see the show on opening day. Shocked by what she saw she took to Twitter, arguing her case, and rapidly gained support along the way, notably from Lorna Miller (@mistressofline), resident political cartoonist of CommonSpace. Miller is no stranger to having her work plundered by male artists.

Miller first met McLeod in ‘94 when they were the only two female members of the Scottish Cartoonists & Comic Artists Members (SCCAM) Club which would meet once a month in Blackfriars pub. McLeod also drew the attention of cartoonist and former president of the Scottish Artists Union Terry Anderson. He is currently a member of the board of directors of Cartoonists Rights Network International. There was also support from Ewan Kennedy, former lawyer and owner of The Leiper Gallery, where in 2014 McLeod gave a presentation on the problems facing female cartoonists.

Banksy and McLeod share a Glasgow connection – the current restoration of one of Banksy’s works executed in 2001 in The Arches of Argyle Street shows Banksy wanted to make his mark in Glasgow. The Mona Lisa in McLeod’s vision demurely drinks a cup of tea having escaped from her frame. In Banksy’s mural she’s back in her frame and a gun is being pointed at her. Or she will be once restored. It is the only known and recorded Banksy artwork in Scotland and a crowdfunding campaign has raised over £1,000 towards the restoration. It was created at a joint exhibition with artist Jamie Reid in 2001 when Banksy was less well-known. 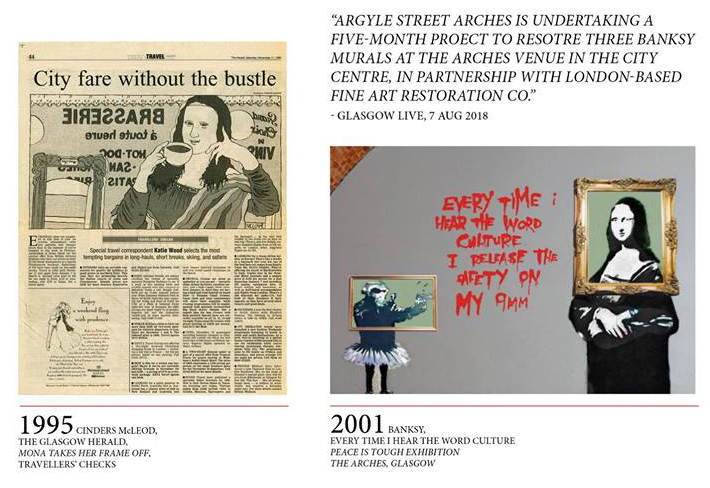 McLeod believes Banksy worked from newspaper clippings, and neglected to credit her for her work. Banksy so far has not come forward to comment – even by anonymous Tweet. McLeod is a fan and says she thinks he is “fantastic” but she feel betrayed.

Ever the chameleon, Banksy’s work fades in and out of the urban landscape, from Bristol to London to Glasgow, his work springing up in surprising places, shining a light on a political or social injustice. No sooner would his work be discovered, he’d vanish, outfoxing the art world and the press. But then Banksy, like Warhol before him, enjoyed a commercial success, dealers aroused by the chase.

And yet, he exists – somewhere he has a bed, a fridge, a bank account, a stash of art materials – and far from achieving notoriety, cheap knock-offs of his work are now a staple of British suburban home decor.

So how can Cinders McLeod, an earthy, hard-working single mum with two children and an eagle-eye, wrestle with this elusive character? Perhaps the ultimate goal cannot be holding Banksy to account – that
would be unrealistic, like hunting a ghost. Instead, perhaps it is enough to help make her case public, and reclaim her authorship, if only so that in future, as she so wittily points out, she is not accused of plagiarising her very own work. And if it is true, this gives us another perspective on Banksy’s limitations – half-artist, half-jackdaw, he appears to be an artistic predator not unlike Warhol, equally genius and fraud, with a dubious claim on authorship. 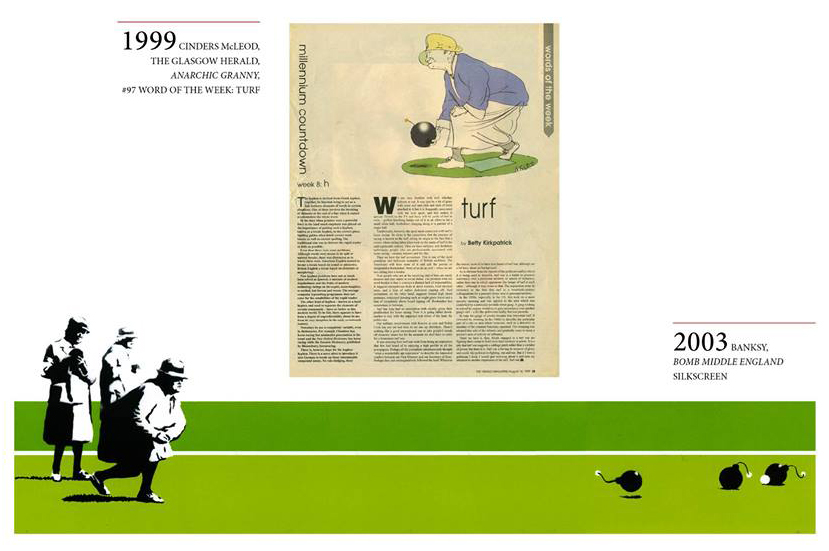 We cannot underestimate the originality of lesser known, even ‘anonymous’ works, and the artistic rights of the artist we never heard of. Perhaps we all need to pay more attention to what we see – particularly in the internet age, where ideas and images are cribbed and processed beyond recognition. The original images are so surreal and transformative, it’s difficult to see how Banksy has added anything to them, except a new context and global audience. It’s not too late to rechristen them as the babies of Cinders McLeod.

What would McLeod’s character for the Glasgow Herald, the diminutive Broomie Law with the giant social conscience, say about famous male artists allegedly ‘ripping off’ lesser known female artists? Those big
saucer-eyes say it all. 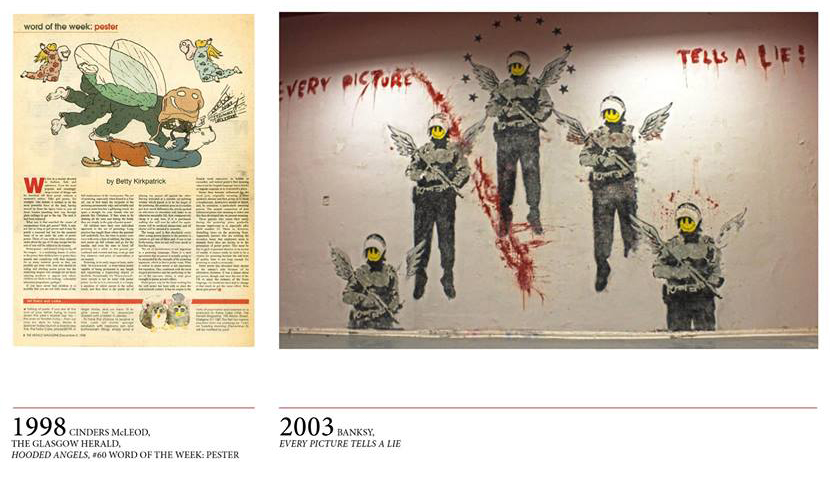