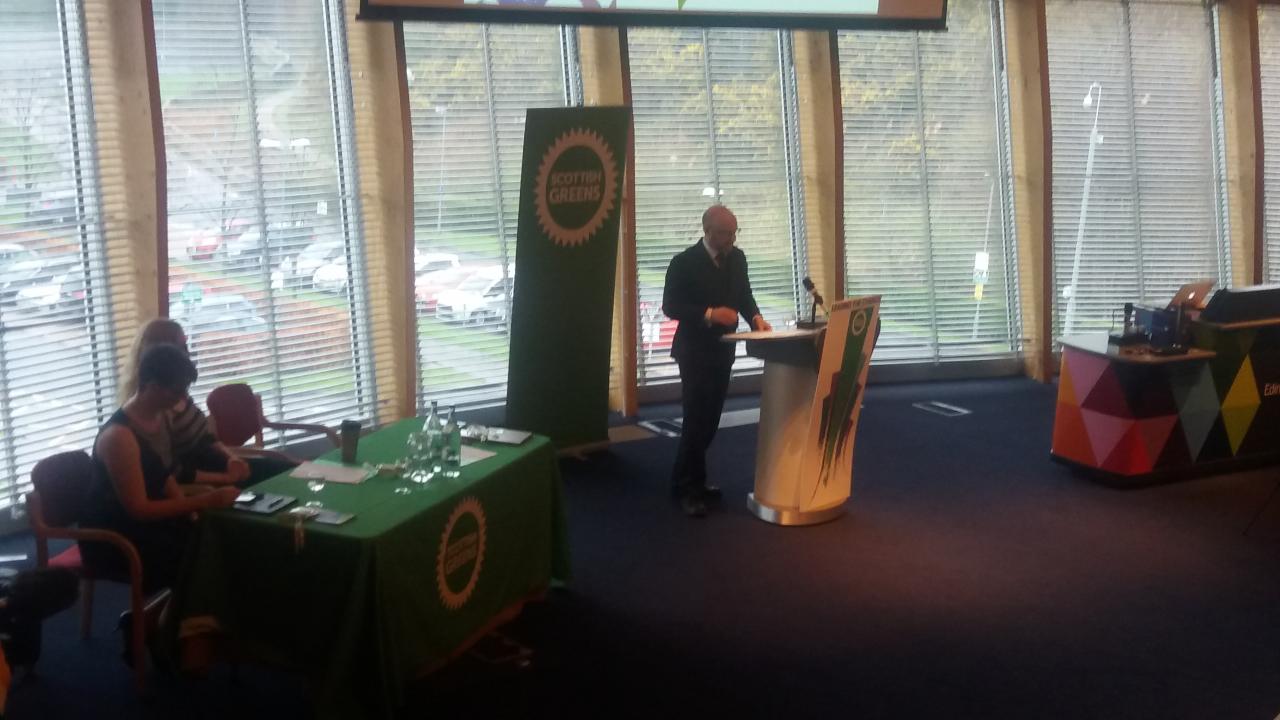 Scottish Greens co-convener argues the UK Government has proven it will not respect Scotland’s parliamentary democracy, and calls on Nicola Sturgeon to provide details of her plan for a second independence referendum

– Patrick Harvie argues that clarity on Brexit negotiations may never come, and that the Scottish Government may miss its window of opportunity for a second referendum by waiting

– Harvie condemned the UK Government for attempting to overrule the Continuity Bill, calling it “the greatest sign of contempt” shown to the Scottish Parliament since its creation

SCOTTISH Greens co-convenor Patrick Harvie, speaking at the party’s conference in Edinburgh today [6 April], argued that the material change of circumstances widely regarded as necessary to trigger a second referendum on Scottish independence has already come to pass, and called on First Minister Nicola Sturgeon to provide clarity on such a vote.

Addressing the conference at the Craiglockhart campus of Napier University, Harvie condemned the UK Government’s attempts to overrule the democratic will of the Scottish Parliament by legal means over the Continuity Bill, describing it as “the greatest sign of contempt ever shown by the UK political system since the Scottish Parliament’s creation.”

Harvie said: “Their Brexit crisis meant that both parliaments had to pass legislation to keep our law operational if we’re taken out of Europe. Holyrood made those emergency preparations, and did them better than the UK, building in more democratic scrutiny, and a stronger legal basis for human rights, environmental principles, and animal welfare.

“The UK Government didn’t like what we were doing, so they triggered a court case after we’d passed the bill, to prevent it getting Royal Assent, then they legislated to retrospectively limit the powers of Holyrood on devolved issues, making it impossible for the Bill to come into force.”

Harvie continued: “This is far more than a procedural battle between two governments – it is a clear sign that what we have now, 20 years after the people of Scotland finally achieved their own parliamentary democracy, is the clear knowledge that whatever laws we pass in devolved areas of authority, the UK is not only able but fully willing to retrospectively bind our hands and block the laws we make whenever they disagree. Did anyone say: ‘material change of circumstances’?

“We don’t need to wait to find out how Brexit ends – that change of circumstances has happened already, and the people of Scotland must, and will, have the chance to take our futures into our own hands once again.”

In an interview with BBC Scotland earlier that day, Harvie also said that the Scottish Government may miss its “window of opportunity” for a second independence referendum by waiting for clarity on Brexit negotiations that may never come, and called on Nicola Sturgeon to spell out her plans for another plebiscite.

Harvie said: “I understand why some in the SNP want to wait for clarity on Brexit before they decide on the timing of the independence question in the future.

“The trouble is that clarity may not be coming around the corner. If there’s an extension even of months, possibly longer, then that clarity won’t be emerging, and we may miss the window of opportunity in this session of the Scottish Parliament.

“I don’t want to see that opportunity missed, and the reality is there has already been a material change of circumstances in Scotland.”

“The UK is not only able but fully willing to retrospectively bind our hands and block the laws we make whenever they disagree.” Scottish Green co-convener Patrick Harvie MSP

Harvie continued: “I think we very clearly do need some clarity from the Scottish Government about what’s going to happen with the timing of an independence referendum. We need to have the time to pass legislation through the Scottish Parliament to ensure that that’ll happen, and we have a majority for that at the moment.”

The first day of the conference was also addressed by the Greens candidate in the Leith by-election, Lorna Slater, and Scottish Greens co-convener Maggie Chapman, who vociferously condemned the UK political system, and argued the need for radical action in response to climate change.

Chapman told Scottish Greens delegates: “We have had 40 years of an economic system, propped up and enabled by a pathetic yet oppressive political system that has alienated people, marginalised communities, and destroyed so much of the planet. Neo-liberalism, with Thatcherism and its continuation in New Labour Blairism, has acted like a cancer.

“It has eaten away at the very essence of what it means to be human. It refuses to accept that there is intrinsic value in caring for others, in being creative, and in cooperating with each other rather than competing for everything.

“We have had 40 years of a economic system, propped up and enabled by a pathetic yet oppressive political system that has alienated people, marginalised communities, and destroyed so much of the planet.” Scottish Green co-convener Maggie Chapman

“It has spread its tentacles into every aspect of our lives. It is destroying the NHS south of the border and the welfare state, commodifying education and culture, inflating housing bubbles and creating crippling debt.

“And while it knows the price of everything, it understands the value of nothing. It exploits human labour, decimates non-human species, and pollutes our life support systems.

“As if this wasn’t enough, all of this is compounded by a political system that tells people not to get involved, not to rock the boat, not to challenge the elites who cling to power, whilst all the time eroding their rights, distancing them from decision-making, and curtailing their freedoms of expression.”

Addressing the recent youth climate strikes and the Scottish Greens’ failure to persuade the Scottish Parliament to declare a national climate emergency, Chapman went on: “We must act now in the face of the climate crisis.

“And we know that we cannot do this alone. Greta Thunberg shows us that it’s not individuals that will change the world. It’s not even us all working as greens together with parliament. It’s all of us, pulling together with others who share our desire for a better world, building and growing social movements that will be the agents of change.

“We understand that we don’t need to wait to be in power before we can use our influence to positive effect. Other parties think that change happens only by winning power and then imposing change on the people. But we know, because of our roots in participatory democracy and our experiences in communities, that real change is different: it comes from the people. So it is our job to work with these movements, be a part of these movements, walk hand in hand with them, nourish them and be nourished by them, so that we can change our world. Together.

“I want to congratulate and praise the thousands of school climate strikers who walked out of classes on 15th March, and I extend a very warm welcome to the strikers who will be speaking to us tomorrow. The concern of a new generation for their planet is truly heartening. And it’s a concern we must do everything we can to support.

“Our young people are leading the way in challenging the systems and structures of our politics and our economy. We must listen to them. We must take them seriously. We must give them their future.”