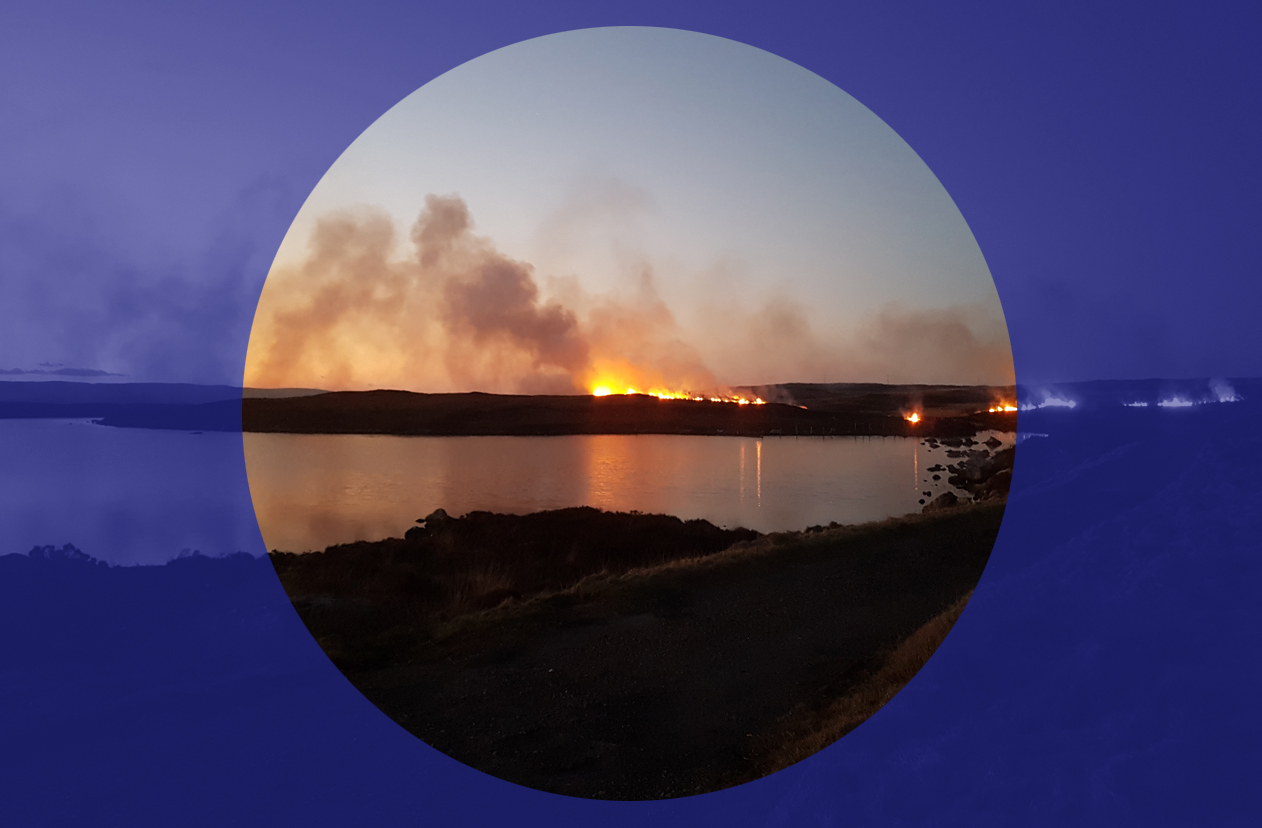 “We may only have one parliamentary term left to deal with the climate emergency – not before we take action – and this will require the vision and bravery to stand up against those (currently) powerful vested interests.”

On the day that the official muirburn season would have ended, the Campaign Manager of the Revive coalition writes about muirburn, the recent temporary ban passed in the Scottish Parliament as a result of the Covid-19 crisis and how this political will must translate into fighting the climate crisis.

THE WORLD is in a period of pandemic which has been rightly dominating media coverage and has triggered an emergency response from governments across the globe.

As part of the Scottish Government’s response to the crisis, emergency legislation was passed two weeks ago which included a temporary ban on muirburn to ease the burden of emergency services and to reduce any possible strain on public services.

Muirburn is not ‘essential work’ during normal times unless you prioritise the maintenance of an unnatural excess of grouse for sport shooting. Despite calls for voluntary restraint, the burning continued, forcing the parliament to act.

Muirburn is the practice of burning heather in patches and strips and is said to make the environment more suitable for red grouse. The tall heather provides concealment from predators, younger heather (regrowth after burning) provides adult grouse with more nutritious shoots for food, and short heather provides greater insect availability for chicks.

The more grouse that are shot in the shooting season (August 12–December 10) the more the shooting estate is worth. In fact, a 2019 Scottish Government report showed that for every brace of grouse killed, around £5,000 is added to the capital value of a driven grouse estate.

There is a huge pressure to do everything possible to maximise the numbers of grouse and this leads to large-scale environmental damage and the unnecessary killing of tens of thousands of Scotland’s animals which are said to threaten their unnatural population density.

The industry’s lack of voluntary restraint with muirburn is yet more evidence that it needs strong legislative measures to tackle all the unsustainable practices associated with driven grouse shooting.

The Scottish Government’s commissioned report on grouse moor management by Professor Alan Werritty was published last December and it recommended a licensing scheme for all muirburn. Revive agrees with this approach but the terms of any license are of key importance.

Four per cent of Scotland’s landmass is regularly burnt every year on grouse moors and a large proportion of this is on areas of deep peat – an immensely important natural resource for carbon sequestration. Peatland in Scotland stores almost 25 times as much carbon as all trees and plants in the UK and muirburn threatens this greatly – when damaged, peat can actually emit carbon.

Muirburn is of course just one of many unsustainable practices which take place on grouse moors and decision-makers will soon have to decide if a few extra grouse for sport shooting are worth the environmental cost.

A widescale change from the monoculture of intensive grouse moor management towards a more sustainable and diverse wooded landscape would not only stop the current environmental damage, it would be a gamechanger in the fight against catastrophic biodiversity loss and for the sequestration of carbon.

This transition would make our country less volatile and more resilient to the effects of climate change in the future. Moreover, a transition away from driven grouse shooting would end the wider circle of destruction that surrounds the industry.

Ending driven grouse shooting would stop the snaring, trapping and killing of untold thousands of mountain hares, foxes, stoats, weasels and crows in the name of increasing grouse numbers for sport shooting.

Ending driven grouse shooting would stop our countryside being polluted by tens of thousands of medicated grit stations which keep grouse numbers unnaturally high before thousands of tons of lead shot are spread across the landscape.

Ending driven grouse shooting could be a significant step in ending the mysterious illegal persecution of Scotland’s birds of prey which, like other wildlife, bring many tourists to our country.

If the Scottish Government can’t commit to ending grouse shooting for sport, it can take the sensible and necessary steps to end the circle of destruction and the unsustainable elements that surround it.

Grouse moors therefore, sometimes seen as an unsurmountable problem can be radically transformed into an immense opportunity for our wildlife, the environment but also our people.

For all the land they use up (somewhere between 12-18 per cent of Scotland – nobody really knows, but it’s a lot) grouse moor management only contributes around 0.02% of Scotland’s economy (GVA) – or about £23 million.

The opportunity for communities to use (and own) the land better is enormous. Forestry alone provides several times more jobs and a much larger economic impact than grouse shooting.

It’s clear that land currently used for grouse shooting is a perfect target in the war against climate change. Far from costing jobs, Revive has found that a just transition away from driven grouse moors could actually improve employment prospects, while helping the government meet their climate targets on time.

We may only have one parliamentary term left to deal with the climate emergency – not before we take action – and this will require the vision and bravery to stand up against those (currently) powerful vested interests.

We have now seen the Scottish Parliament taking action against muirburn in the face of one crisis. This is important because it serves as a reminder that real change needs to be enforced, not based on voluntary goodwill where actors often ignore best practice or exploit loopholes when they have a vested interest.

Moreover, it shows that when there is the political will to tackle a crisis, common sense can prevail. Considering the world also faces a climate crisis Revive calls on MSPs to continue their show of leadership and end muirburn on grouse moors once and for all.

Max Wiszniewski is the Campaign Manager for Revive: the coalition for grouse moor reform. Revive is made up of Common Weal, Friends of the Earth Scotland, the League Against Cruel Sports Scotland, OneKind and Raptor Persecution UK.

To join the movement for radical reform of Scotland’s moors sign and join Revive here.