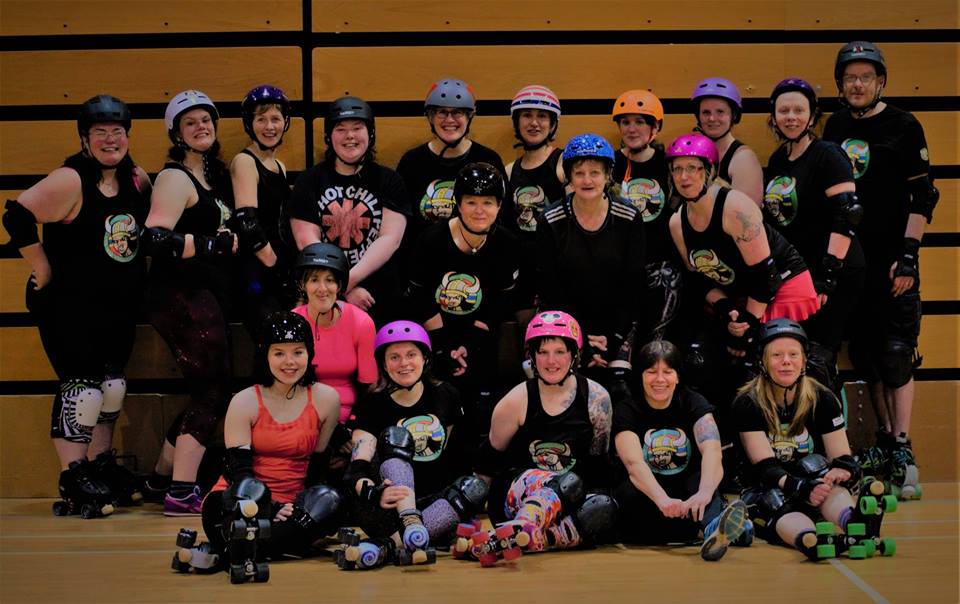 “I HAVE never done well with team sports, partly because I’m deaf and so I struggle with groups and communication, especially when the people are moving. When I started doing research, I found that the level of support and inclusivity in roller derby meant it didn’t feel overwhelming.”

A few months ago, Ronie Walters had never seen a live roller derby game. Now she is the founding member of Scotland’s newest and most northern roller derby league, based on mainland Orkney.

Roller derby is a full contact sport played on quad roller skates on an oval track, where one player – the jammer – has to lap the opposing players as many times as possible in each two-minute ‘jam’ of the game, while the other team’s four blockers try to stop them.

At age 42, Walters had rarely skated since she was a child, but she was attracted to roller derby as a sport with a difference. “There is room for all body sizes and shapes, and it actively works to include everyone – in my experience, that’s pretty rare.”

Disappointed that there were no opportunities to play roller derby in Orkney, Walters, now using the derby name DeafWish, posted a call out for interested members in a local Facebook group. What started as an idea quickly grew into the 40-members strong Orkney ViQueens, named as a feminist play on Orkney’s Viking heritage.

“There is room for all body sizes and shapes, and it actively works to include everyone – in my experience, that’s pretty rare.” DeafWish, Orkney ViQueens

The skaters range from their early 20s to their mid-50s, and most had no experience of the sport at all until the group started training four months ago. With two members now trained up as certified coaches, and an experienced roller derby referee among their ranks, the skaters are practising the minimum skills laid out by the Women’s Flat Track Derby Association (WFTDA), before they can start competing.

Asked what drew them to roller derby, the members echo DeafWish’s reflection that the game’s reputation of inclusivity made it more appealing than other sports. “At almost 42 years of age, I don’t feel too old to be involved”, says ViQueens member Jemima Sinclair, adopting the name Gypsy Thunder.

“When I look at all the other women’s teams about, all the ladies involved seem to be late teens and early 20s, which puts me off,” Thunder explains. “Derby isn’t like that at all, and I’m not the oldest in our team, which makes it more desirable to be part of.”

Kayleigh Archibald, aged 28 and known as Valkyrie Vicious, played a number of team sports in school, but she never really felt like she “fitted in”, and eventually stopped participating. For her, roller derby is different. “Everyone is made to feel so welcome. I immediately felt relaxed and able to be myself among the members, there are no ‘cliques’, and it is immensely fun.”

“I loved the idea of having derby names, custom outfits and rocking music- what other sport ticks those boxes?” Kayleigh Archibald, Orkney ViQueens

Valkyrie Vicious first heard of roller derby when she saw the film Whip It, watching in awe in the hope that she would someday have the chance to try it out. “The fact that it is an intense sport, with huge health benefits is a massive plus,” Valkyrie adds. “I also loved the idea of having derby names, custom outfits and rocking music – what other sport ticks those boxes?”

The ViQueens have found support in the wider roller derby community, with skaters from Inverness City Roller Derby and Rainy City Roller Derby in Manchester travelling to Orkney to deliver boot camps. Founder DeafWish, who has a long history of working with community groups, is already seeking to improve links and information sharing between different leagues – a particularly important goal for leagues in rural and remote areas such as Orkney.

Her new Facebook group, where skaters can share videos of themselves practising skills and receive feedback from members all over the world, has already gained over 500 members. DeafWish has also joined a subcommittee set up by WFTDA, the international governing body for women’s roller derby, which is working to improve access and inclusion for deaf and hard of hearing skaters.

“We may have only been on the go a few months, but I think we have the potential to build our skills and get out there and show the world what the UK’s most northerly roller derby team is made of.” Jemima Sinclair, Orkney ViQueens

The ViQueens may be “fresh meat” in the world of roller derby, but they’re determined to keep up their momentum and make their mark. Describing her vision for the league over the next few years, DeafWish says she hopes they “will be able to travel and host home games with other leagues”.

“I also hope that we have a junior league established so that we can start passing the derby-inclusive ethos along to younger kids and teenagers,” DeafWish adds.

Gypsy Thunder says she’d love to see the team play throughout Scotland, the UK, Europe, and even internationally. “Why not?” Thunder asks. “We may have only been on the go a few months, but I think we have the potential to build our skills and get out there and show the world what the UK’s most northerly roller derby team is made of.”

For now, Valkyrie Vicious is thinking of the short term: “My goals are to put in the hard work and effort to pass my minimum skills, and continue onwards to the point I can look at myself as a Derby Girl, and think ‘Yeah! I really do kick ass!’.”