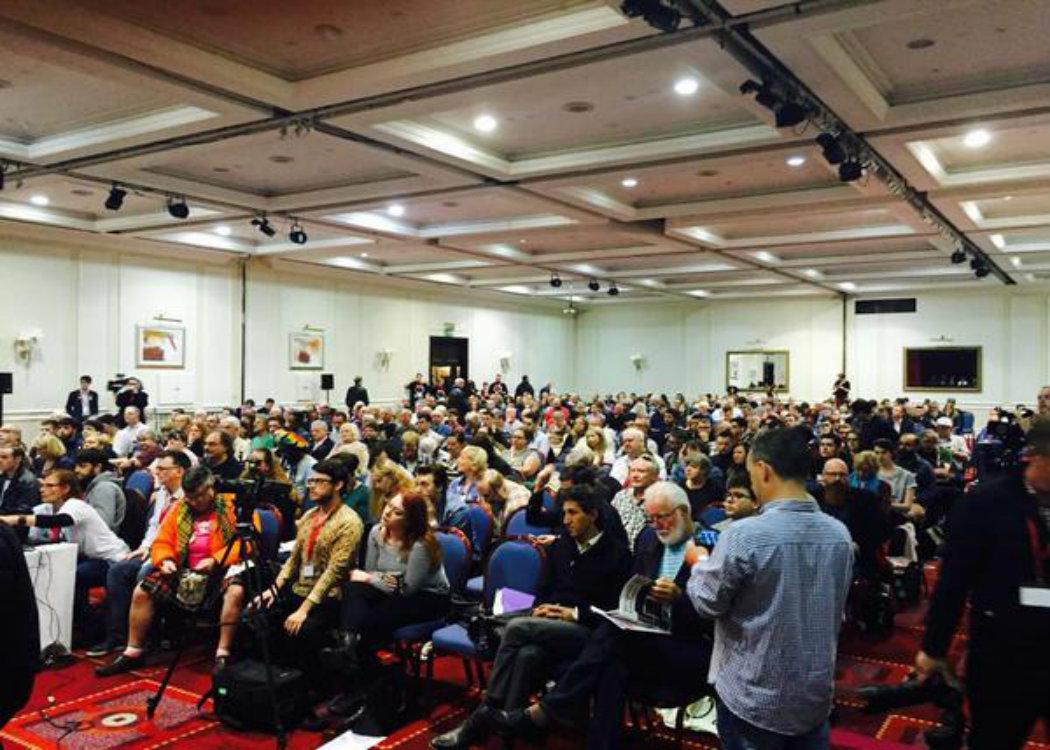 LEWIS AKERS is just 16, but he speaks with an engaging authority.

“Radical voices now are necessary, and the left in parliament is what is needed.”

Much has been said for and about the generation of young Scots whose first experience of politics was campaigning for a ‘Yes’ vote in Scotland’s independence referendum campaign beginning in 2012. In some senses Lewis, who attended the launch of the new Rise electoral coalition on 29 August is typical of that generation’s infectious, almost reckless attachment to activism.

“For a year of my life I did nothing but campaign,” he says.

But in at least one important respect he is atypical. Why did he not, like so many of his peers, join the Scottish National Party?

“The left has taken a modern turn. We’ve ditched the hammers and the sickles.” Lewis Akers

“The SNP has some good policies, some great policies in fact,” he says. “But look at their programme in total. Its great university students don’t have tuition fees, but they are abandoning people in colleges and cutting the college budget.”

“They’re not providing free public transport which I think is a crucial issue for young people.”

And does he think the radical left will be in a position to provide these things?

“The left has taken a modern turn. We’ve ditched the hammers and the sickles. I think it’s exciting in itself that the left is modernising – it’s great to be a part of this with folk from the SSP and folk from RIC. This is definitely my thing, what I’m doing.”

Depending on age and previous experience of the radical left the Rise launch in Glasgow’s Marriot Hotel was either a complete surprise or a near inevitability for most people.

For people whose last standout memory of the socialists left was the brutal bust up between Tommy Sheridan and his former SSP comrades, it may have appeared from the blue.

But for young socialists who attended the launch, some of whom would have been in primary school at the time of the SSP split, it represents the culmination of efforts poured into the independence referendum.

“I support Rise because it’s the most important left unity project that Scotland has seen since the formation of the SSP 18 years ago,” says Jenni Gunn, a member of the SSP’s national executive, who would have been seven at the time of the formation of her party.

However much Gunn is happy to criticise her political opponents, she’s very mindful of the socialist movements recent travails in Scotland, and not eager to over-egg its recent renaissance: “The left has its problems as well of course. But the appeal of the radical left to me is the appeal of change. Real measurable change in people’s lives.”

“I support Rise because it’s the most important left unity project that Scotland has seen since the formation of the SSP 18 years ago.” Jenni Gunn

So why not the Greens? They too increased their membership substantially following the independence referendum. The Greens were firmly on the ‘Yes’ side during the referendum and have a raft of policies to the left of the SNP.

For some young activists, it’s fair to say their lack of affinity with the Greens comes down to perception: “I do not feel close enough to the Greens to join them,” says Pinar Aksu, a 22-year-old-human rights activist from Turkey who delivered a speech on the rights of refugees at the Rise launch.

There is also the belief that the Greens’ policies are not comprehensively left-wing: “There are certain policies that they don’t include.

“I do not want to become a member of a political party when I do not agree with all its policies and statements,” she says.

Conor Cheyne, a 21-year-old apprentice engineer from Inverness, is a little more trenchant: “Neither the SNP nor the Green Party are socialist organisations and never have they claimed to be,” he says.

“I believe in redistribution of wealth, putting the future into the hands of the workers, collectivism above private gain.

“While the Greens may have policies on some of these issues, they have no real desire to see the breakdown and final end of capitalism,” he adds.

And what about the end of capitalism? Doesn’t the failure of the radical left Syriza government to even end harsh austerity measures in Greece, let alone capitalism, prove again that Cheyne’s socialism is a failed project?

“We have already started dialogue with other groups in Europe as seen at the Launch. Now it is time to build those links into real European-wide movements.” – Connor Cheyne

“Syriza showed that it is very difficult to do it on your own; but it is not impossible. In order to truly implement socialist policy we must have a pan-European strategy with socialists across Europe working together.”

Would Scotland’s hand in this affair be Rise? “I think Rise can help achieve this. We have already started dialogue with other groups in Europe as seen at the launch. Now it is time to build those links into real European-wide movements. Solidarity across Europe and the world can overcome organisations like the IMF and EU.”

Indeed, young Scottish activists could be found mingling freely with their equivalents from Poland, Germany, Greece, Quebec and the US ‘Black Lives Matter’ movement at the Rise launch. But will their own youthful compatriots, propelled by the same referendum experience but finding their political home closer to the centre of the pro-independence movement, ever join them?

“I think more young people, as they travel through their journey of becoming political will become more radical,” says Akers, with that uncanny authority again.

Time will tell if it’s youthful exuberance, or if the spirit of the radical left can imbue more of Scotland’s young people in years to come.