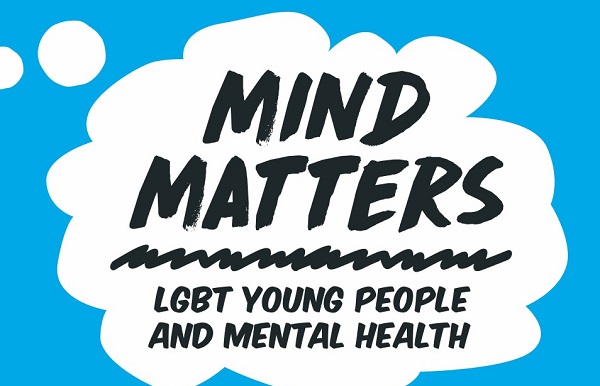 YOUNG PEOPLE have told of discrimination and poor awareness when accessing Child and Adolescent Mental Health Services (CAMHS), as a new campaign is launched to mark International Day Against Homophobia, Biphobia, and Transphobia (IDAHOBIT).

The campaign, called Mind our Health, has been launched today by LGBT Youth Scotland’s mental health commission, which consists of 10 young people from across Scotland.

Speaking to CommonSpace, the young people have described being told by mental health professionals that they “don’t deal with” LGBT issues, and have pointed to particularly poor experiences among trans young people. 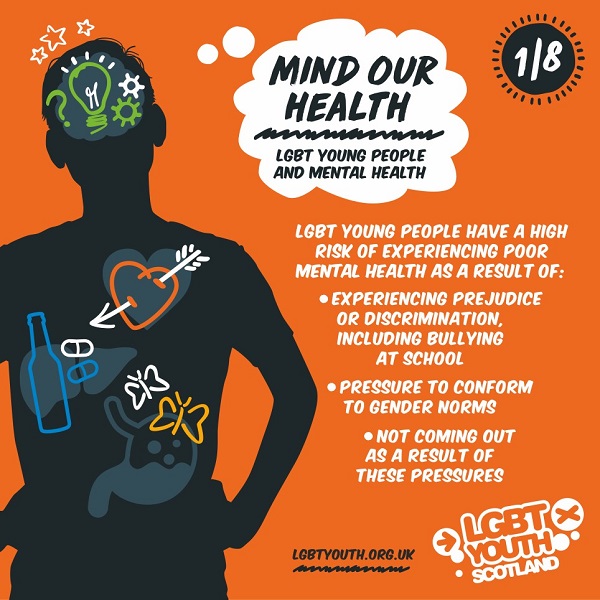 LGBT Youth Scotland is calling for required training on LGBT awareness for all NHS clinical staff and medical students, and seeking to improve awareness of LGBT young people’s experiences of mental health and their rights in accessing services.

Deva McGinty, policy and participation officer at LGBT Youth Scotland, spoke to CommonSpace about why the organisation feels that better understanding among NHS professionals is needed. “There’s a misconception that you have poor mental health because you’re an LGBT young person, but actually you have poor mental health due to the prejudice and discrimination you face.

“One of the key issues of referring young people to services like CAMHS for issues to do with depression, anxiety, self-harm or suicide ideation – so it has nothing to do with their sexual orientation or gender identity – [is that] if they go for an initial assessment and they mention that they’re LGBT, then they get referred back onto us because people just see the label and assume that we’re better equipped to deal with it, but none of the staff here are clinicians in mental health, we’re youth workers.”

Blair, a member of LGBT Youth Scotland’s mental health commission, suggested that a current lack of LGBT awareness within these services “can put people in a worse position and make them feel worse about their situation”. 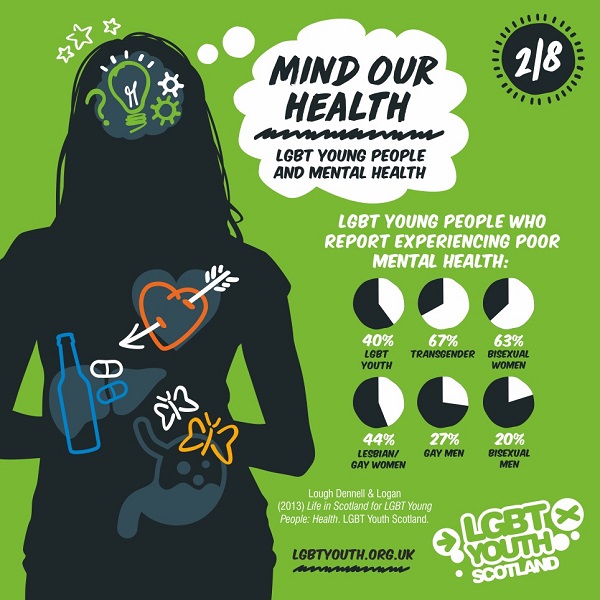 Speaking to CommonSpace about their experience of accessing mental health services, Blair explained: “I went to CAMHS, for my mental health issues, and I slowly explained it to them, and I said I broke up with an ex, and I was LGBT and they were LGBT. They were like, ‘well that’s the problem, that’s why you’re feeling this way’. I was meant to go back and, even then, they’ve been cancelling and saying ‘oh, go access somewhere else’. But there is nowhere else.

“For somebody who’s 17, who’s getting minimum wage, and I’ve come from not a very fortunate [background], I can’t exactly just go, ‘oh, let’s just spend all this money on a therapist’. That makes things even worse because you can’t access these services and this service is telling you, ‘oh, you’re in this section so we’re not going to help you’, but that’s Child and Adolescent Mental Health Services. You’re supposed to help all young people, it doesn’t matter what their background is.”

The UK-wide Trans Mental Health Study (2012) found that trans people are at particularly high risk of experiencing poor mental health, with 55 per cent of respondents having been currently or previously diagnosed with depression, and 53 per cent saying they had self-harmed at some point.

Ash, a 17-year-old member of the mental health commission, said: “A lot of people have more knowledge in LGB but not that much knowledge, I don’t think, as a general population about trans topics.

“I went to CAMHS before I came out, because of different mental health issues. I realised what was kind of the root of my problem, which was me being trans – because obviously I was like, I don’t really know why I hate myself – and it all made sense, but I still had other issues and stuff going on with me. 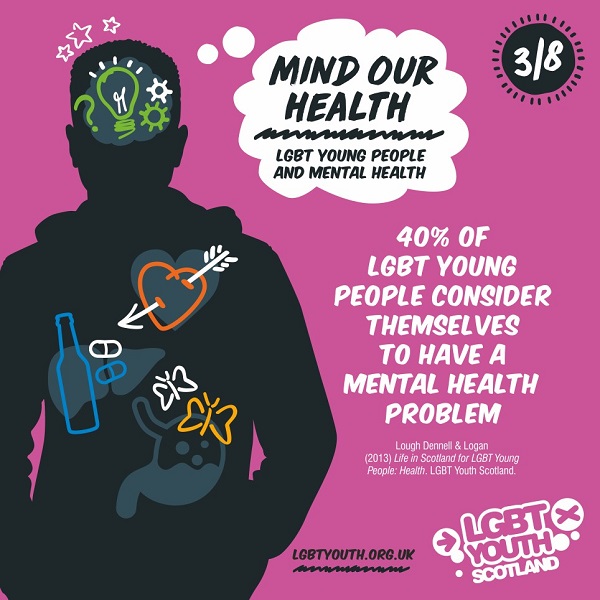 “I let my therapist know and she was like, ‘Oh, yeah, we don’t really deal with that so we’re going to have to discharge you now and that’s that, because that’s what’s causing your problems’.”

Charlie, who is also working on the campaign as part of the mental health commission, highlighted the experience of one of their friends: “I know someone who went to CAMHS, and the therapist essentially used him as a training tool.

“They didn’t know anything about trans issues, so their 50-minute sessions which should have been focussed on how he was feeling were focused on him educating the therapist on trans issues.”

Research by Stonewall Scotland (2015) found that only three in 10 health and social care staff said their employer had provided them training on lesbian, gay and bisexual people accessing services, and 25 per cent had received training on trans service users. 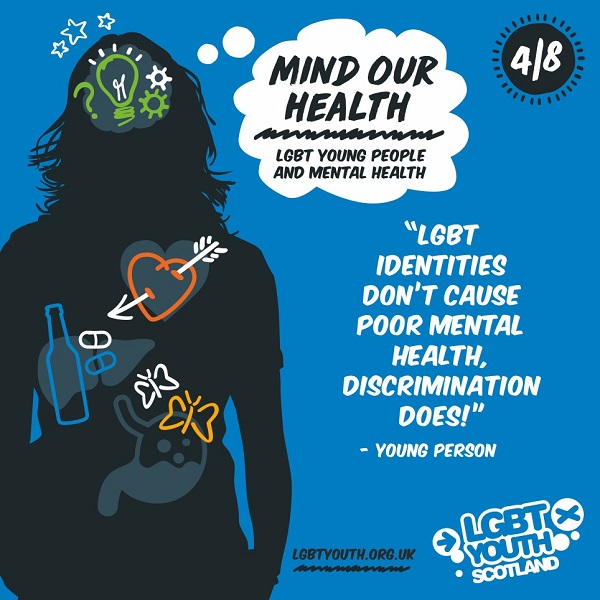 Ash, of LGBT Youth Scotland’s mental health commission, explained why the young people involved feel that the Mind Our Health campaign is so important.

“If young people don’t feel like a medical professional is going to be well versed in helping them cope with their mental illness, which probably goes hand in hand with being LGBT, then they’re not going to go and seek help.

As part of the campaign, young people will be writing letters to health professionals, and a pocket guide will be published on LGBT young people’s rights around mental health support.

In response to the campaign, a Scottish Government spokesperson said: “We want to create a Scotland where all stigma and discrimination around mental health is challenged and improve our collective understanding of treating mental health problems, and equality runs through every part of that.

“Last year we invested more than £850,000 to support LGBT organisations to promote equality, which included raising awareness of the needs of LGBTI people among those who provide vital services.”