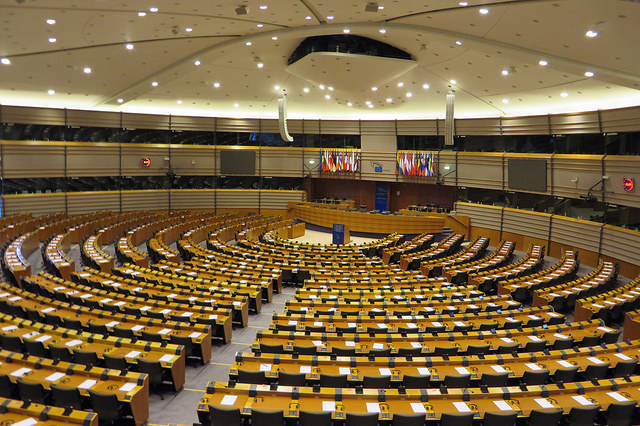 The far-right Spanish party Vox will accuse the Catalan independence movement of a “coup d’état” at the European Parliament in March, while an event featuring Catalan President Quim Torra and former president Carles Puigdemont has been banned

SNP MEP Alyn Smith has called for the European Parliament to be “a centre of debate, not a one sided forum,” following controversy over the news that the far-right Spanish political party will take part in an anti-Catalan independence event at the parliament in March.

This follows developments last week, when it transpired that the European Parliament had banned a conference which would have originally featured both current Catalan President Quim Torra and former president Carles Puigdemont, reportedly under pressure from the Spanish Government.

Vox, which favours the abolition of Spain’s autonomous communities and the elimination of their national and regional identities, will be represented at next month’s event by their secretary general, Javier Ortega, as keynote speaker, along with the party’s Catalonia spokesperson Jorge Buxadé and their vice-president for institutional relations in the Balearic Islands, Malena Contestí.

A promotional poster for the event – combatively titled ‘Catalonia, a Spanish region’ – describes the Catalan independence campaign as an attempted “coup d’état”.

The poster states: “After decades of political inaction, a coup d’état was attempted in one of the Spanish regions, with the intention of breaking away from the country’s territorial integration”.

Focus on Vox has grown in the past week, following the announcement of general elections in Spain on 28 April. According to current polls, Vox could tip the balance and allow a coalition of Spain’s three right-wing parties to form a government.

Last week however, another event – originally intended to take place on 18 February – including both Torra and Puigdemont and organised by the Flemish political party N-VA was cancelled, after European Parliament security officials declared that there was a “high risk” it could “pose a threat to the maintenance of public order on Parliament’s premises.”

In explaining their decision, the security officials made reference to recent occupations in the European Parliament and Commission buildings in Barcelona by pro-independence demonstrators, and cited “the tensions linked to the start of the trial against pro-independence leaders”.

Along with concerns over the “lack of information over the event’s participants” and the possibility of “incidents in or around the Parliament”, the officials decided that “the security threat linked to the event cannot be mitigated by the Parliament’s security services.” Therefore, the Catalan event could not be authorised.

The decision followed calls from the three main Spanish political parties – the Popular Party (PP), Ciudadanos (Cs), and the governing Socialist (PSOE) party – for the event to be cancelled.

Additionally, a demand was made by Esteban González Pons, PP’s spokesperson in the European Parliament, that Spanish interior minister Fernando Grande-Marlaska “find the legal formula” to arrest Puigdemont if he enters the premises. Puigdemont remains wanted by Spanish authorities on charges relating to his involvement in the 2017 Catalan independence referendum.

The European Parliament’s decision garnered further controversy when Finnish MEP and European Parliament vice president Heidi Hautala appeared to confirm that the parliament had bowed to pressure from political parties in Spain, adding that concerns over security were merely an excuse.

Speaking to CommonSpace, SNP MEP Alyn Smith commented on the planned Vox event: “The European parliament has hundreds of events a week and this back room gathering of a dozen cranks and hardliners reflects badly on them, but will cause no ripples in the Parliament.  In no way does it indicate anything other than they could find an MEP daft enough to sponsor their event.

Smith continued: “More concerning is the banning of the events involving the Catalan leadership, much as the event is still taking place elsewhere in Brussels.  I believe in dialogue and free speech, and it is important that the European Parliament is a centre of debate, not a one sided forum.  I’ll continue to work with colleagues to ensure the Parliament is even handed on all issues.”

“I believe in dialogue and free speech, and it is important that the European Parliament is a centre of debate, not a one sided forum.” SNP MEP Alyn Smith

Smith informed CommonSpace that he has co-signed a letter from Green/EFA MEP Josep-Maria Terricabras, expressing concern over the “double standards” the European Parliament has shown in its recent decisions.

The letter states: “It is astonishing and extremely worrisome the double standards of the President of the European Parliament, Mr Antonio Tajani.

“On one side he censures a conference with the participation of Mr Quim Torra, President of Catalonia, and Mr Carles Puigdemont – alleging that they are a threat for security – and on the other side, he accepts the conference “Catalonia, a Spanish region” organized by VOX, an extreme-right Spanish party. Catalonia is a vibrant, diverse, pro-European country and its citizens don’t deserve to be treated with such disdain and with such double standards.

“We strongly condemn the unequal treatment, the lack of institutional impartiality of Mr Tajani, and the unacceptable censorship of any event where political ideas are debated. We don’t ask for the prohibition of this public hearing, since our commitment with freedom of speech and pluralism is far more stronger than that of Mr. Tajani, and Gonzalez Pons (EPP), Iratxe García (S&D) and Javier Nart (ALDE) who explicitly requested the ban of Mr Torra and Mr Puigdemont conference. But we do ask for the respect of European fundamental values and impartiality when it comes to protect pluralism in this chamber.

“We will persist, by all legal and political means, on our right to express democratic political ideas, such as Catalan self-determination, in the European Parliament.”

The European Parliament did not respond to requests for comment at the time of publication.