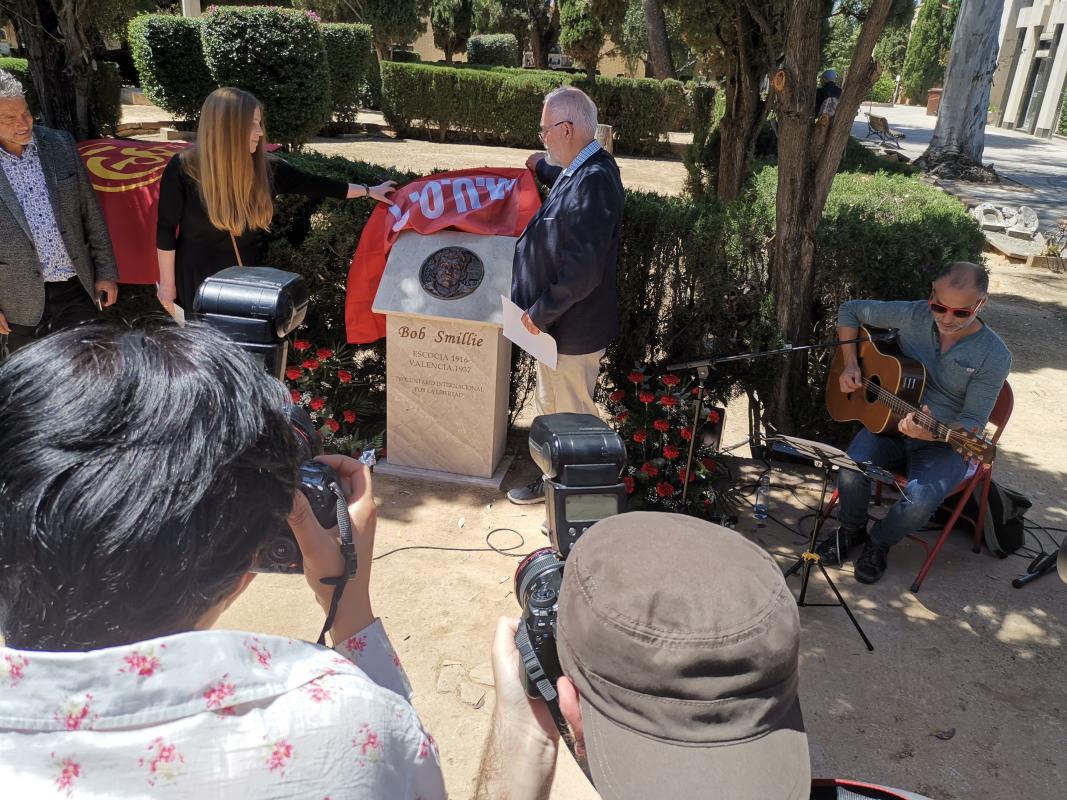 Michael Eaude, author of Sails & Winds, a cultural history of Valencia (Signal, April 2019), remembers Bob Smillie, a Scottish anti-fascist volunteer during the Spanish Civil War who died in Valencia, aged just 20, 82 years ago today, who was commemorated last month in the city he was laid to rest

Bob Smillie viewed the Spanish struggle not as one between capitalist democracy and fascism, but rather as the struggle of the Spanish working class against the forces of fascism and international capitalism. Independent Labour Party leader, Jimmy Maxton, 1937

82 years after his death on 11 June 1937, in circumstances still not fully clarified, Bob Smillie, anti-fascist volunteer in the Spanish Civil War, is now commemorated in Section 5 of Valencia’s enormous main cemetery. The small pillar by a garden has his face carved on top and a dedication that reads (in Spanish):  Scotland 1916 – Valencia 1937, International Volunteer for Freedom.

On 14 May,  around 100 people attended an emotional ceremony near the mass grave where he is buried. Frank Casey, from Lanarkshire like Smillie and sculptor of the monument, told the crowd: “The passport photograph of Bob epitomises that idealistic generation. The rebelliousness is there in the angle of the head and the wistful half smile.” As if to emphasise the persistence of the class society that Smillie fought to destroy, his actual grave lies beneath the elaborate pantheons of wealthy Valencians, many bigger than workers’ flats in the neighbouring quarter of Sant Marcel·lí.

Grandson of the Scottish miners’ leader Robert Smillie, Bob was a precocious revolutionary militant. Aged 20 he was in Spain fighting with the small Independent Labour Party contingent on the Aragon front. In Homage to Catalonia, his comrade George Orwell reflected bitterly: “Smillie’s death is not a thing I can easily forgive. Here was this brave and gifted boy, who had thrown up his career at Glasgow University in order to come and fight against fascism, and who, as I saw for myself, had done his job at the front with faultless courage and willingness.”

READ MORE: ‘An example to us all’: Memorial honours Scottish seafarers who broke Franco’s blockade

When Smillie reached Barcelona in October 1936, he acted as secretary to John Mcnair, the Independent Labour Party’s representative, before travelling in early 1937 with the small ILP contingent to the Aragon front. On leave back in Barcelona, he and the other ILP volunteers witnessed the conflict known as the May Days, when the revolutionary forces (anarchists and POUM (anti-stalinist Marxists)) were defeated by the Republican Government and communists. A few days later, on 10 May, Smillie was arrested near the French border when trying to leave Spain for a speaking tour of Britain in support of the Spanish Revolution.

This was no ordinary detention because of some alleged irregularity in Smillie’s papers. His transfer by agents of the DGS, the State Security Service, to Valencia, capital of the Republic, made clear that this was a political arrest. Accused of rebellion, Smillie entered the city’s Model prison on 12 May. His interrogation started on 2 June. He complained of abdominal pain a few days later and died, officially due to peritonitis, on 11 June. At once, rumours began to circulate that he had been murdered. This is quite possible, given the political context. POUM leader Andreu Nin was arrested five days after Smillie’s death and murdered some ten days later. Smillie’s commander in Aragon, Georges Kopp, was also arrested. The ILP contingent had to go underground. The POUM and ILP were called fascist allies of Franco by the Communist Parties.

Smillie may have been murdered, but this is not proven. What is clear is that he was unjustly arrested and interrogated. His imprisonment, in poor conditions, certainly did not aid any medical condition he might have had.

The ceremony for Bob Smillie was addressed not just by Frank Casey. David Connolly, chair of Independent Labour Publications, called on us to honour the “bright light” of Smillie’s short life by continuing the fight against the renewed threat of fascism. Two relatives of Smillie spoke, Christine Wallace and his great-nephew, also Robert Smillie. It was a moving and sombre ceremony, enhanced by the guitarist-singer Ona Nua playing several songs, including Hijos del pueblo (Children of the People), one of the favourites of Smillie who would sing it on the Aragon front to entertain his comrades and intimidate the fascist lines.

READ MORE: Untold story of the UK connection with children of the Spanish Civil War to be told through theatre in Scotland

The organiser of the commemoration was a Valencian activist and writer Mariado Hinojosa. She was inspired several years ago, on reading Orwell’s book, to find out how and why Smillie had died in her home city. Rigorous researcher, careful not to confuse speculation with fact, Mariado reconstructed Smillie’s story (the dates above are hers). I asked her what she thought had happened to him: “No-one knows for sure, but given the contradictions about dates between the official version at the time and records unearthed now, I believe that he was taken from the Model prison to the Russian-controlled xeca (secret prison) in the Santa Úrsula Convent, beside the Torres de Quart. He was buried rapidly before any family or friends could see the body, with no autopsy conducted. If he can be exhumed, we may find out whether or not he died violently.”

Smillie’s unsolved death was not just a source of anguish for his family and comrades, but raises the thorny question of the role of the Stalin-led Communist Parties in the Spanish Civil War. Before the ceremony I talked with Frank Casey. He told me that he had sculpted a similar memorial for the Communist poet John Cornford, also killed in the Civil War. Cornford was 21; Smillie, 20.

“The left has been too sectarian. I think these old differences need to be overcome, so that we can all work together,” Frank said.

His sentiments are impeccable: all parts of the left should work together to fight fascism. However, the words sidestep the rather important fact that Smillie died while under arrest during a witch-hunt promoted by the Communist Parties. Smillie was a “Volunteer for Liberty” as Frank’s sculpture says. He was also more than that: an anticapitalist fighter, as James Maxton wrote above.

The Valencia ceremony was a moving tribute. The plaque justly honours Bob Smillie. But we do no service to anti-fascist unity or to Smillie if we fail to confront Stalinism or if we water down his revolutionary politics.