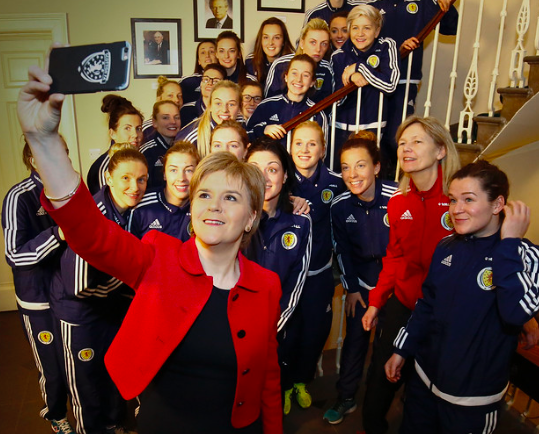 Michael McEwan, CommonSpace columnist and chairperson of his local disability group, says the increased prominence of Scotland’s women’s football team can only be a good thing for all of those seeking more coverage of under-represented groups in sport

The Tartan Amy, led by manager Shelley Kerr, head off to the tournament in France where they will face in Group D Argentina , Japan and the auld enemy England.

It is a big achievement to qualify for the final, particularly as there are currently no professional women’s teams in Scotland.

Kerr, previously captain of the team, also made headlines as the first woman in the UK to coach a senior men’s team, Stirling University in the lowland league. She took charge of the national side back in 2017, previously managing Arsenal and Scotland under 19 women’s teams.

One of the player’s to watch is Kim Little in midfield, this will be her first major tournament with Scotland. In 2012 she represented Great Britain at the Olympics but missed out in the 2017 Euros through injury. In 2016 she was named BBC’s Women’s Footballer of the Year.

The team final warm up game was against Jamaica last week, before travelling to France for the big one. It was a good send off with a win of 3-2 , at Hampden, in front of a record crowd of 18,555, jus the second time that the women’s team has appeared at the national stadium.

The previous attendance record for a Scotland women’s match was 4,098 at World Cup qualifiers against Switzerland in Paisley.  At the final friendly before France four times that crowd cheered the team on at Hampden, with many more watching and listening at home, myself included.

First Minister Nicola Sturgeon came along to do a presentation before the game for those who played in Scotland’s first women’s match against England in 1972 , when at the time those players didn’t receive any caps.  We lost that one 3 -2.

READ MORE: Michael McEwan: How football can be a positive thing for Scottish society

The rise of the women’s game is a positive development here in Scotland not just in sports, but for society. At the last game there was a number of club strips with players name, with lots of young people chanting and with their faces painted. It shows not only an appetite for women’s game but a whole new generation engaged in sport.

Continued coverage will work to break down the barriers, not just for football but for every national sport in Scotland, and to show that women can play just as well, in this case better than male counterparts.

For many years I’ve advocated for more coverage of disability sports in the media, and its uplifting that there’s been increased coverage for women’s football in recent times.