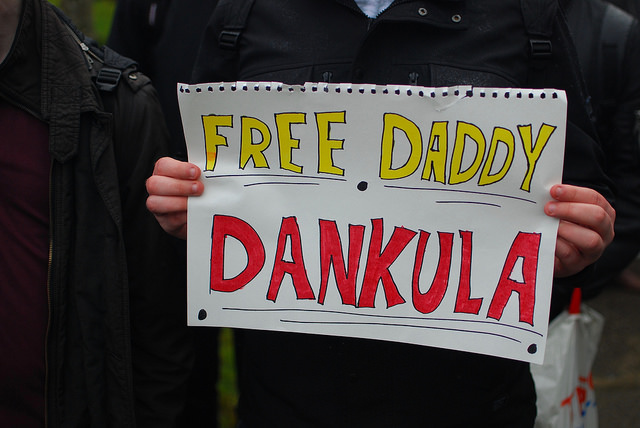 Writer Mick Clocherty spoke to comedians in Glasgow about the notorious case of Youtuber Mark Meechan, aka “Count Dankula”, and found little sympathy

THE “Count Dankula” saga has come to an end, with irritating plug-sporting YouTuber Mark Meechan walking away from Airdrie Sheriff Court with an £800 fine. For anyone lucky enough to have missed this particular media circus, this was due to him making a YouTube video (with the expressed purpose of annoying his girlfriend, Meechan reminds us in every interview) of him teaching a pug dog to perform nazi salutes; whilst he giggles and dribbles and uses the phrase “gas the jews” 23 times.

This has lead to commenter cameo appearances from everyone from rightfully offended Jewish activist groups, to washed up celebrities, animal rights advocates and naturally, the far-right. In short, it’s been a bit of a shit show.

For me personally, the most offensive thing about the whole debacle is that the news media frequently referred to Mark Meechan throughout as a comedian.

Meechan is lower tier. A vlogger. He is to stand-up comedy what Rebecca Black is to a hard-working band who play their own instruments. Writing material, with innuendo, irony and real satire is quite frankly not the same as hitting record and letting loose an improvised racial diatribe in a dorito-crumbed vape-cloud from your stupid, mutton-chopped face.

I feel like I shouldn’t even have to spell it out at this point, but there’s a difference between making a point that upsets people, and making a point of upsetting people. Without commenting on the wider issue of free speech, or the fact that prosecuting him was an embarrassing waste of money that has only served to increase his notoriety, I think we’ve been giving the guy entirely too much credit.

“For me personally, the most offensive thing about the whole debacle is that the news media frequently referred to Mark Meechan throughout as a comedian.”

Surprisingly, Meechan has found himself defenders within the ranks of some famous comedians, notably David Baddiel, Jonathan Pie and Ricky Gervais (because of course Ricky Gervais). Pie actually went to the court to perform his shtick, ranting and raving whilst treating a guy who posts reaction videos under the name “Count Dankula” like he’s Nelson Mandela. In his video, Jonathan Pie issues the challenge, “show me one neo-nazi using the video as a recruiting tool”.

Rather than purely looking at comments from men desperately looking for relevance by commenting on a trending news story, I resolved to speak to a couple of local comics to try and get a sense of what the scene in general thinks of this guy, here in Glasgow, at least.

Veteran stand-up Richard Brown: “Anyone can call themselves a comedian. He’s not a peer. When I worked in a factory there were older guys there who would make a joke at someone’s expense, and when that person didn’t laugh would grab them by the shoulder going ‘aw mate, I’m only joking, I’m just kidding’, assuming the person was offended. The person wasn’t offended, the joke was shite. YouTube has created an epidemic of ‘comedians’ who assume you’re not laughing because you’re offended.”

Elaborating on whether or not this style of trolling or “shitposting” can be considered genuine satire, Brown went on: “I guess trolling can be a form of satire, but if trolling is the only weapon in your satirical arsenal you’re probably not being a satirical, you’re probably just being a cunt. They’ve not grasped what satire is. It’s like when everyone in UKIP started putting ‘libertarian’ in their Twitter bio even though they don’t believe in free movement of people.”

“YouTube has created an epidemic of ‘comedians’ who assume you’re not laughing because you’re offended.” Richard Brown

When I asked Richard about the court’s decision to prosecute Meechan in the first place, he replied: “It’s incredibly harsh. Everyone also seems to be overlooking the context. The video is set up as ‘nazis are the worst so I’m going to teach my girlfriend’s dog to be a nazi to wind up the missus.’ Aye, the joke’s shit, but it’s clearly and explicitly a joke.”

Jamie Rolland, another comedian well familiar with the Glasgow scene, said: “I think what he needs is a sensitivity training course about the holocaust, as he clearly doesn’t understand it at all. I’ve never been anti-Semitic to piss my girlfriend off in any of my comedy routines. I’m pretty sure Sacha Baron Cohen isn’t getting arrested tomorrow, because there’s a clear deprecating element to his more shocking comedy.”

“So many comedians feel scared about this and I would ask, shouldn’t you be scared your material is just anti-Semitic then? If we are defending this guy, then what do we want the right to say in comedy? Why do we want these phrases protected?”

He added: “There is no comparison for well thought out, researched satire. This is just some cunt who trained a dog, which is not easy, that’s a lot of effort, to react to anti-Semitic statements and give nazi salutes.”

I realise that I can hardly call speaking to two people an accurate representation of the entire Glasgow comedy scene, and that the opinions of comics on the case vary as widely as those of members of the general public; but surely there’s a shared sense that this anything-for-a-reaction style YouTube trolling is a lesser form of wit than stand-up comedy?

Ultimately, I have to agree that the state should not be trying to police what we can and can’t say to this extent. Elevating “Count Dankula” to the level of national news has done nothing but raise his celebrity and create more faux outrage for the alt-right.

At the time of publishing this article, Meechan has raised almost £150,000 in two days, apparently to bring in “top legal representatives” in the hopes of “reversing the standard that this case sets”. I’d imagine some of the money will also go towards paying for his X-Box Live subscription, a life-time supply of Rockstar energy drinks and a parrot he can train to mimic the script from “Schindler’s List”.

What we should really do with Mark Meechan is leave him making shit YouTube videos for American teenagers who like to shout at feminists. I can’t think of a harsher punishment than that. Let him give Tommy Robinson interviews. Leave him with the realisation that his most earnest defenders are the ones wearing jackboots.

And if you ever see him in person – don’t forget to tell him that he’s a talentless twat with all the wit and charm of a concentration camp guard, and as much charisma and stage presence as Hitler’s missing left testicle. You’d just be exercising your own right to free speech, after all.