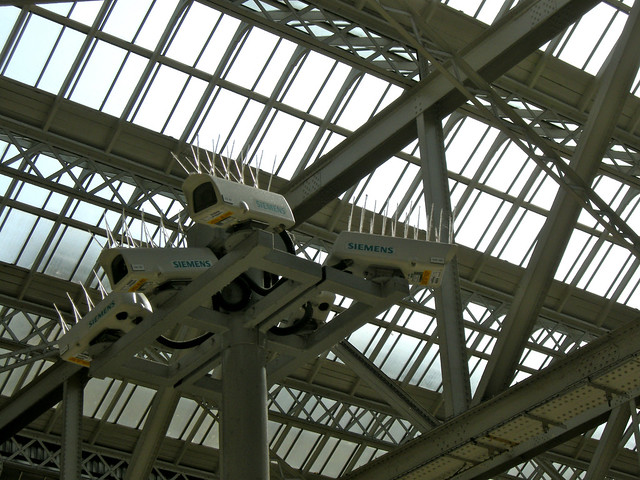 FAST on the heels of the news that Israeli company NSO has been hacking into private messages of human rights activists via a WhatsApp vulnerability, San Francisco has banned police use of facial recognition technology and Liberty is launching a high profile case today in Wales to achieve the same result here. These and other developments should force a public debate over the ‘NICE’ Israeli military-grade surveillance system scanning Glasgow city centre streets with “emotional recognition” software. London pedestrians trying to evade data capture by facial recognition cameras have been fined £90.

Yet in February 2015 Scottish Palestine Solidarity Campaign launched a campaign to persuade Glasgow city councillors to react to the announcement from Israel the previous year that NICE Security Systems had secured a major contract to deploy “its security solutions to enhance the community’s safety and security infrastructure” in Glasgow. The surveillance system used data from “multiple sources, including phone calls, mobile apps, emails, chat, social media, video, and transactions”. With “emotional recognition” software included in the contract package, Police Scotland in Glasgow would deploy technology developed by Israeli military and secret services to oppress the Palestinian people. Both NSO and NICE Security Group monetise Israel’s undoubted expertise and technology developed out of this brutal oppression.

Green MSP Patrick Harvie criticised the installation as an attack on civil liberties and Scottish Lib Dems justice representative Alison McInnes saw a threat to “the privacy of innocent people going about their business.”

Despite such concerns, the installation of an Israeli military-grade surveillance system in the city centre was carried out with no public consultation and seemingly no debate within the City Council. The Glasgow system takes police intrusion into the lives of all to a new level.

Indeed, so malign are the uses to which such Israeli surveillance systems are put that 43 Israeli veterans of military Unit 8200 refused to serve in the occupied Palestinian territories because their skills were being used to identify Palestinians who were gay or with a relative in need of a life-saving operation who were then blackmailed into becoming informants.

It was graduates of Unit 8200 who developed the NICE Security system installed in Glasgow; their 43 comrades’ refusal to serve occurred in the same year the system was installed in Glasgow. That was also the year Glasgow University students elected as Rector Edward Snowden, a fugitive in Russia from the US military industrial complex. Snowden had revealed the blanket surveillance that the US Government had denied it carries out on US citizens. His claims have not been seriously challenged, nor his specific claim that the degree of domestic surveillance carried out by GCHQ in the UK is much more intrusive than in the USA.

Glasgow City Council grabbed at an offer from David Cameron’s Coalition Government to wholly fund the surveillance project via the Technology Strategy Board (TSB) later renamed Innovate UK. This body is sponsored by the UK Government Department for Business, Innovation & Skills, and works to counter the boycott, divestment and sanctions (BDS) movement by building trade links with Israel and, as in the case of the NICE Glasgow contract, funding whole projects.

Glasgow City Council denied that NICE was connected to the Israeli military, a force condemned repeatedly for war crimes and crimes against humanity, yet NICE is owned by Israeli arms company Elbit Systems which is tightly integrated into the structures and activities of the Israeli military.:

Why is Israel a major exporter of such cutting edge technology? Israeli Army Brigadier General Elkabetz told an audience of potential customers for Israel’s surveillance technology: “We have learned lots from Gaza. It’s a great laboratory.”

Major questions are raised afresh by the San Francisco ban and the legal challenge from Liberty in Cardiff. Why, for example, has Glasgow allowed such a threat to civil liberties to be installed in the city yet claimed at the same time that the full capabilities of the technology being purchased would not be utilised? What are we to make of Glasgow’s claim when NICE Security Group VP Chris Wooten announced that NICE looked “forward to a continued partnership with the city of Glasgow…fully utilizing the capabilities that NICE Situator can provide.”

Israeli NSO not only hacks WhatsApp – it sells its expertise to regimes that buy the product to suppress civil liberties. ‘Pegasus’ spyware has repeatedly been implicated in hacking attacks on journalists, lawyers, human rights defenders and opponents of brutal regimes. Saudi Arabia, for example, used the Israeli hacking technology against the family and contacts of Jamal Kashoggi, killed, dismembered and reportedly dissolved in acid in Istanbul. NSO’s defence is that all its clients are vetted by the Israeli Government, which highlights the control the Israeli Government exercises over its arms and surveillance industry.

Given high level concerns about China’s Huawei securing an electronic back door for spying via its G5 expertise, why is there no concern at Israeli hyper-surveillance of what its leaders regard as a hostile population, given Israel’s well documented ‘aggressive’, industrial scale spying in the US and undercover political activity in the UK?

A vigorous public debate is long overdue on whether Glasgow should follow the example of San Francisco. As things stand, every time you walk through Glasgow City Centre, CCTV cameras might try to identify you, assess your mood and crosscheck with any social media, police or other public records.