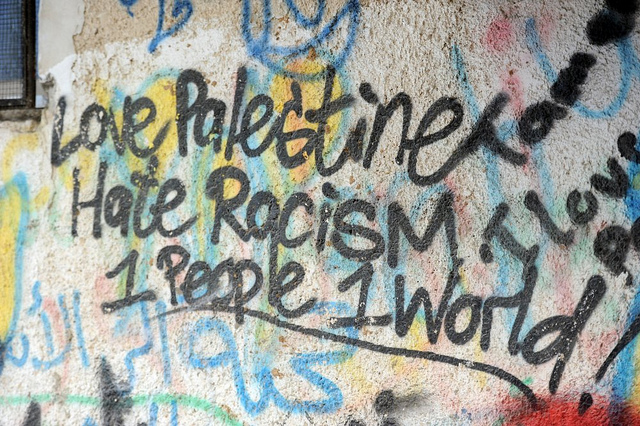 LAST Tuesday [5 March], Wael Al-Rajabi, aged four, and his 18-month-old sister Malik were burned to death in a house fire in Hebron when Israeli soldiers ignored the pleas of locals and stopped a Palestinian firefighting team trying to reach their blazing home. A third sibling remains in intensive care, according to local hospital Director Dr Walid Zalloum.

A year earlier, on 17 March 2018, I attended an event hosted by FBU Scotland in the Mercure Hotel on Ingram Street, just off George Square, Glasgow. We heard a group of Palestinian firefighters from Hebron describe their working lives in Palestine, how they always faced the hazard of being stopped and delayed by Israeli soldiers on their way to a fire or serious road traffic accident.

Despite some arm-twisting the night before to join the 2018 SUTR demonstration, the Palestinian firefighters declined the offer to march. (In the UK on British visas, which are often withheld from Palestinians, the firefighters had been put in a delicate position.)

Glasgow Friends of Israel have announced their intention to join the Stand Up To Racism demonstration again this year; this means an annual provocation, the politics of the march contested throughout the entire year, as long as it includes an organisation founded by Christian fundamentalists to support a state that meets every definition of the crime of apartheid.

Allowing an Israeli Embassy front group to join puts SUTR in direct opposition to the Palestinian call for Boycott, Divestment and Sanctions, and it weakens the struggle against racism in Scotland.

The Palestinian people are asking us to oppose the British-Israeli axis by boycotting and isolating all groups and individuals associated with the racist Israeli State. They renew this appeal while suffering massacres that use UK munitions. Reason enough, one might think, to accommodate a people suffering a trauma launched by their British conquerors in  1918.

Israel strives to be accorded a “normal” status among nations even though it is a settler-colonial anachronism given that anti-colonial revolutions, wars and movements virtually ended direct European (and Japanese) control of conquered and subjugated territories.

Locked in a bitter struggle, existential for the Palestinians, the Israeli State and the Palestinians both see “normalisation” of Israel as an issue where neutrality is impossible; all normalisation of Israel – that certainly includes Israeli flags and pro-Israel banners flying over an anti-racist demonstration – gives Israel what it craves and is viewed with dismay by the Palestinian people. Their struggle for liberation has taken its strength internationally from anti-racism movements just as clearly as Netanyahu has aligned Israel with other racist regimes worldwide, applauded along the way by Friends of Israel.

Palestine, like South Africa in its day, is the litmus test for all progressive movements.

While planning a march along Glasgow City Centre streets that are swept by cameras linked to an Israeli military grade surveillance system – installed as a pilot but also explicitly as part of David Cameron’s opposition to the BDS campaign – SUTR Scotland appeals to all “to keep the politics of the Middle East ” separate from the domestic struggle against racism.

Palestinian flags, however, were prominent on SUTR marches for many years! We are a natural component of an anti-racist movement. The appeal is doubly absurd given the raison d’etre of the Friends of Israel organisation, namely to justify and defend a regime that kills and dispossesses people because they are Palestinians and gives others passports and homes on stolen land only because they are Jews.

The international Palestinian-led BDS movement is opposed by well-funded groups, who work with Israeli embassies, diplomats and politicians. Not yet fourteen years old, it has played a significant auxiliary role in the Palestinian freedom struggle and will continue to do so – its advocates are for the first time now represented in the US Congress, where they face the usual baseless accusations of being “anti-semites”.

READ MORE: Analysis: History has humiliated May over ‘terrorist’ Mandela – supporters of apartheid Israel will be next

The BDS movement is firm on principles and strategy while being flexible on tactics, a flexibility needed to deal with the surreal situation created by the SUTR challenge; a pro-Israel organisation is being allowed to march in support of Israeli racist massacres as part of an anti-racist demonstration. March stewards will guide supporters of the only state to recognise South Africa’s bantustans past Mandela Place, ostensibly to commemorate the anniversary of the Sharpeville massacre in apartheid South Africa. This bizarre masquerade will be observed from Police HQ in the East End utilising the full potential of Glasgow City’s military-grade surveillance system bought from Israel as a premium product tested on the Palestinian people.

Those who are facilitating the normalisation of Israel during a period of murder would do well to remember Martin Luther King’s words, perhaps especially while passing Mandela Place: “In the End, we will remember not the words of our enemies, but the silence of our friends.”