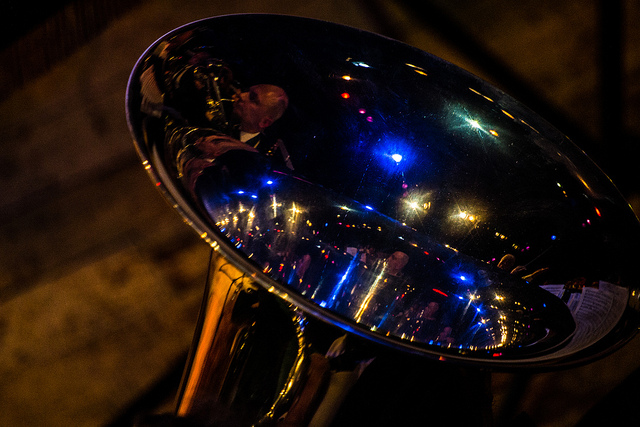 MIDLOTHIAN Council backed down from plans to end music tuition in the local authority at its budget meeting on Tuesday [12 February], following a musical protest from pupils.

The pupils gathered outside the meeting in Dalkeith with brass bands in an effort to convince the Council not to become the first in Scotland to end all Council delivered music tuition for those below S4 and S5. A petition with over 12,000 signatures was delivered to the Council.

Word came through to the “musical flashmob” outside that the Council were not going ahead with the planned cuts.

As a crowd of school kids play their instruments, word on the street is that Midlothian Council has *just* backed down and music lessons will NOT be cut. Bravo, @WeAreTheMU! ? #ChangeTheTunepic.twitter.com/xIuLulyxqy

There had been an uproar about the plans locally and nationally, the legality of which had been questioned in the Scottish Parliament last week due to SQA exams containing music questions relating to the music tuition directly.

Across Scotland music tuition has been cut back and charged to parents, but the Holyrood Education Committee found in January, after an investigation into the issue, that it should be delivered to all pupils free of charge.

The protest was backed by legendary folk singer Karine Polwart, who tweeted this message following the news of the pupils’ victory, who said it should be an inspiration for others that protest can make a difference.

If you’re feeling like protest makes no difference … this morning Midlothian Council axed plans to axe music and expressive arts from my local schools … in response to overwhelming beautiful noisy protest! So speak, sing!!

The Council issued the following statement after the budget meeting:

“Midlothian Council has voted to reject a number of savings measures put forward by council officers, aimed at meeting a £9.739 million budget shortfall in 2019/20.

“To balance its budget for 2019/20, the council has approved a series of other savings measures and utilised additional Scottish Government funding, as well as approving a Council Tax rise of 4.79%.

READ MORE: ‘If it happens here other Councils will follow’: Midlothian parent on ’emotional’ pupil-led campaign to save music tuition

“Councils across Scotland are to set their 2019/20 budgets later this month, with fears of major budget cuts in almost every part of Scotland.”

The Scottish Government agreed a deal with the Scottish Greens in January which will see extra powers for local authorities to introduce new levies on tourists and workplace car parks, and increase the rate of Council tax by up to 4.79 per cent per annum.

“It’s so important. It’s not just me or the pupils saying that, there’s research showing its benefits to mental health, planning, team work; it’s such a useful ability in so many ways.

“For children that aren’t sporty, it’s also a way of making bonds, finding like-minded people and doing something active together. What’s the alternative? Video games and nonsense on the streets. Music tuition is something that’s good for the whole community, not just pupils.”

HELP US BUILD A COMMON FUTURE TOGETHER: Support our work at allofsufirst.org/donate