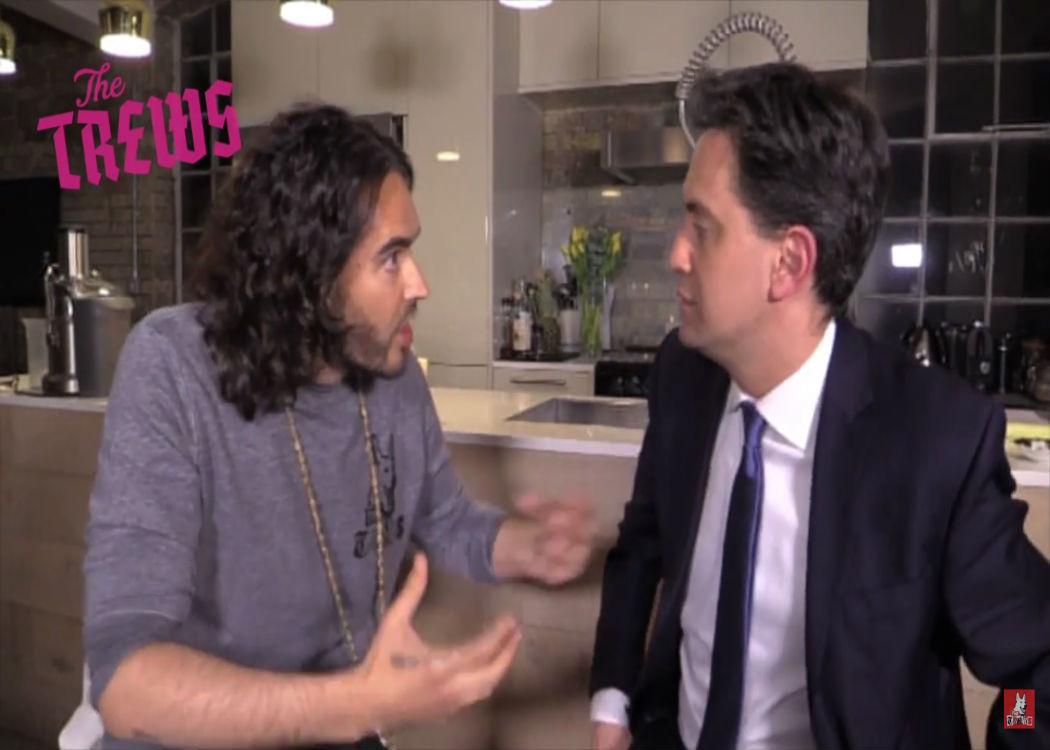 LABOUR leader Ed Miliband said he was willing to tackle the power of global elites, including big banks and media conglomerates, in an interview with left-wing comedian Russell Brand.

Miliband defended the role of politics in achieving social and economic change, citing the NHS, the Equal Pay Act, LGBT rights, workers’ rights and the minimum wage as examples of where “a combination of politics and people” has improved the lives of UK citizens. He challenged Brand’s scepticism about Westminster as a means of achieving radical changes in how society and the economy is run.

“Progress comes through people demanding change, politics responding – not all the way – and people pushing for that change to carry on,” he added

Brand asked Miliband if he was willing to take on powerful global elites who, Brand claimed, were “above politics”.

Miliband responded by saying tackling the question of inequality and disempowerment was what his election campaign.

He said: “My whole argument in this campaign – I think this is a central thing we have to confront as a country – is who the country is run for. Is it just run for the richest and most powerful, or is it run for working people?

Miliband said he would take on vested interests, stating bankers should go to prison for committing fraud and said his government would “look at” tackling media conglomorates.

Brand asked Miliband if bankers could go to prison for “rate rigging”, citing the recent Libor scandal that saw bankers manipulating rates to increase their profits.

Miliband said: “Of course if there is fraud committed by bankers that should happen.”

He was asked about breaking up media monopolies like Rupert Murdoch’s News UK media empire, and said that his party has committed to looking at the issue, adding that he believes the likes of Rupert Murdoch is “much less powerful than he used to be”.

Miliband was asked specifically about how he would go about tackling tax avoidance of transnational corporations like Amazon, a company that has paid less than one per cent of their UK profits in tax.

“And secondly, you’ve got to be able to act on your own when you can… of course there’s ways to deal with it, it doesn’t mean it’s easy, in a world where capital and companies are mobile, but of course you can deal with it, and of course people share your outrage, but you have got to have a government that’s willing to deal with it.”

Tory leader and Prime Minister David Cameron said that Miliband’s interview with Brand showed that he was “a joke”, suggesting that speaking to Brand, who doesn’t believing in voting in Westminster elections, showed Miliband wasn’t fit to be Prime Minister.

Polls show Labour and the Tories are currently neck and neck, with neither party set to win enough seats to govern with an overall majority.