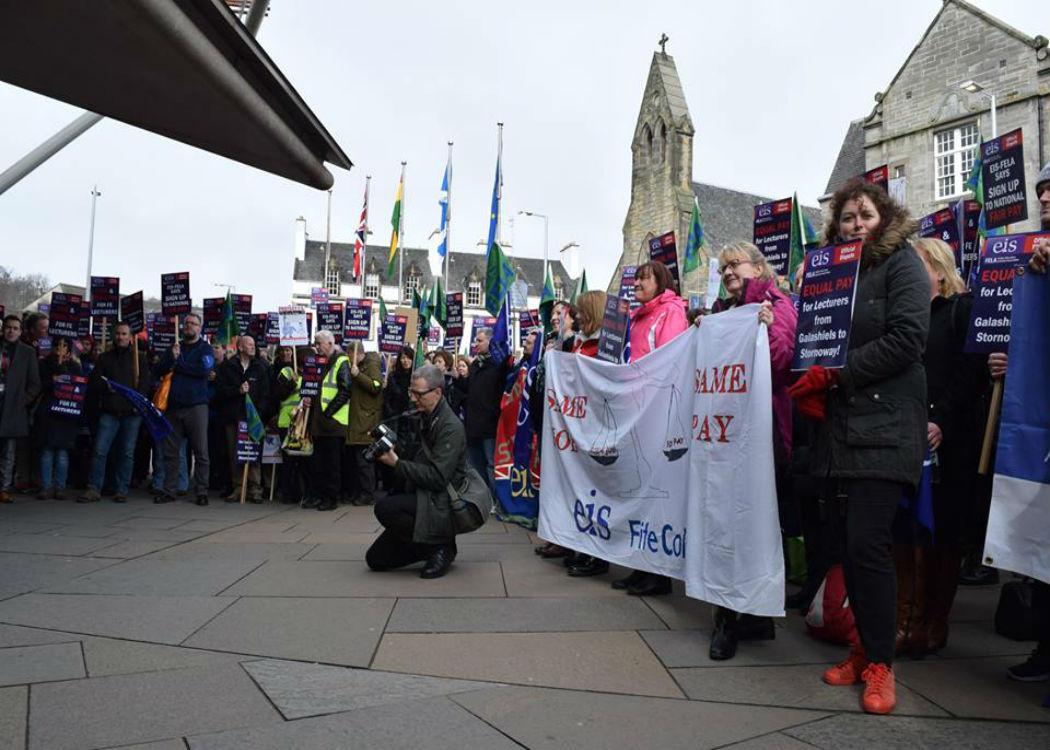 AN HISTORIC Scotland wide college lecturers’ strike scheduled for 32 days has been called off after just 24 hours, as negotiators representing college managements conceded all the strikers major demands.

The equalisation of lecturers pay over three years could see some workers take a pay rise of as much as 33 per cent with wages raised to around PS40,000 per year, if it is agreed by members of the EIS further education union and individual college managements.

The victory follows a one day strike on 17 March, the first of 32 days of strike action scheduled into the summer months. Up to 4,500 workers took to picket lines for the strike , which was voted for by over 90 per cent of EIS further education members over growing pay differentials between teachers across the country.

“We are pretty certain that we have achieved what we have set out to achieve. We are happy with what we’ve got, we think it’s reasonable and fair.

“They were challenging us, for the first time in 23 years can you deliver a national strike. We did.” John Kelly

“It was a solid strike. There were people striking in every single college in the country. The vast majority of colleges were closed. Students were told not to come in. I have to admit it was beyond my wildest dreams.”

The action was the first national strike for 23 years, and follows the re-introduction of national pay bargaining for workers in further education by the Scottish Government.

Kelly said: “They were challenging us: for the first time in 23 years can you deliver a national strike? We did. We also made clear to them that our members were up for going on strike for another 31 days. We had to make that signal, that we would do this if we had to.”

The settlement, which CommonSpace understands includes a two year pay deal, will now go before the EIS national executive. Any agreements from salary negotiations have to be voted for by the union membership.

The changes will mean that lecturers in Scottish colleges will see the equalisation of pay rates across the country within years, ending the system of wild variations of pay depending on location.

Glasgow colleges, covering around a third of college staff across the country, are included in the deal.

One Glasgow striker, who did not want to be named, told CommonSpace: “This was won by unity and the courage of over 90 per cent of our members to vote for serious strike action. The strike held solid across the country. Hundreds of new union members and new reps took to the picket lines. Special mention to union members from Aberdeen who are at the top of the scale and won’t benefit so much, who came out on strike for everyone else. That is real solidarity – some members will get a PS10,000 wage rise.”

There are a small number of colleges in the North of the country who are yet to sign up, but Kelly said that they now had a model for how to proceed with their claim for pay equalisation.

“In Glasgow the workers took decisive action, took strike action, and management then signed-up. I imagine I’ll be touring our branches in the north, pointing to this.”

“Given a public sector facing more austerity and cuts to pay, and services this strike is important for other sections of workers who want to defend jobs and services.” Glasgow striker

“This is the way to stop austerity. It starts at Westminster, comes down through Holyrood. But we can stop it here, at the workplace.

The Glasgow striker agreed that the strike had wider ramifications for industrial disputes.

She said: “Given a public sector facing more austerity and cuts to pay, and services this strike is important for other sections of workers who want to defend jobs and services. The strategy, the campaign to forge unity across many workplaces and ultimately the crushing vote for 32 days of strikes won the day. Austerity is a Tory ideology to destroy public services we have just proved it can be beaten.”

Responding to the cancelling of the planned strike days, Colleges Scotland said: “The management side has worked tirelessly to achieve this outcome which will see an end to any further disruption to students and start to address harmonisation of terms and conditions for college lecturers.”

If the deal is agreed by all parties it will represent one of the biggest victories for striking trade unionists in recent decades in the UK.