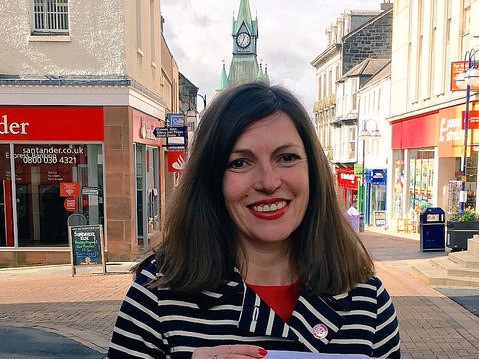 THE SCOTTISH SOCIALIST PARTY (SSP) has called for “shameful” links between Scottish Labour and Carillion to end, following the revelation that ex-MSP and current member of Labour’s Scottish Executive Committee (SEC) Cara Hilton has also worked for a trade body representing the collapsed construction giant.

The Herald newspaper revealed on the morning of 17 January that Hilton, an outspoken supporter of Scottish Labour leader Richard Leonard elected to Scottish Labour’s governing body last year, also works as policy and public affairs manager for the Civil Engineering Contractors Association (CECA), which in addition to representing Carillion also works on behalf of a number of companies previously involved in secretly blacklisting workers.

READ MORE: Carillion collapse: is there a public alternative in Scotland?

Until it was revealed by an Information Commissioner’s investigation in 2009, Carillion and many other firms used the covert vetting service ‘Consulting Association’ to secretly check and blacklist the names of employees and potential employees, many of whom were trade union members who had previously raised health and safety concerns.

On Tuesday night, the UK Government announced an investigation into Carillion, one of the biggest private and public sector contractors in the UK, which began the process of compulsory liquidation on Monday morning, threatening many of the company’s 43,000 workers.

Hilton, Scottish Labour’s candidate for Dunfermline in the last general election, has reportedly met regularly with MSPs since starting work as a CECA lobbyist.

“It is clear that the links to the world of casualized work, PFI rip offs and attacks on workers’ rights which were pioneered by New Labour still have not been broken.” SSP national spokesperson Colin Fox

SSP national spokesperson Colin Fox told CommonSpace: “The revelation that Cara Hilton, a left wing activist in Scottish Labour, has apparently been working for an umbrella lobbying body which not only represents failed Carillion but also a number of companies who have blacklisted workers in the construction industry for decades smells of rank hypocrisy.

“Often these workers were prevented from working at their trade with massive loss of earnings impacting not just on them but their wider families.”

Fox continued: “One of the most common reasons for blacklisting was that a worker was a representative dealing with workers’ health and safety in one of the UK’s most dangerous industries.

“Despite [Jeremy] Corbyn [and] Labour’s condemnations, it is clear that the links to the world of casualised work, PFI rip offs and attacks on workers’ rights which were pioneered by New Labour still have not been broken.

“Once again the militant talk doesn’t match the reality and these shameful links must end now.”

Given that both Carillion and the companies involved in the ‘Consulting Association’ blacklisting have both been condemned by both UK Labour leader Jeremy Corbyn and Richard Leonard – with Leonard saying on Tuesday that Carillion’s failure summed up “everything that is wrong with our economy” – accusations of hypocrisy have also been levelled at Scottish Labour by the SNP.

“Yet again it’s a case of do as we say, not as we do with Scottish Labour.” SNP spokesperson

An SNP spokesperson told the Herald: “Yet again it’s a case of do as we say, not as we do with Scottish Labour. You don’t have to scratch very far beneath the surface to find out they’re not the party of ordinary workers – they’re hand in glove with big business.

“No sooner had reports about Carillion surfaced then Labour were looking to point the finger. While they immediately turned their fire on the company for blacklisting, running a pension deficit and awarding huge executive bonuses, one of Richard Leonard’s biggest cheerleaders was lobbying on the firm’s behalf.

A Scottish Labour spokesperson responded: “The SEC is the democratically elected governing body of the Scottish Labour Party. This is a lazy attempt to smear a Labour campaigner with a first class record of campaigning for workers’ rights.”

CommonSpace contacted the Scottish Conservatives, Scottish Liberal Democrats and Scottish Greens for comment, but had received no response at the time of publication.