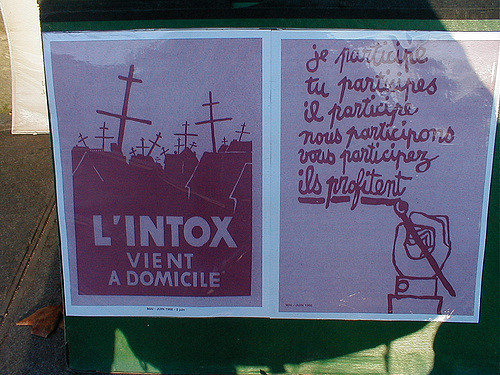 Dr Mireille Pouget provides a personal account of her experience of May ‘68 as a 16 year-old blocking the entrance to her school, and why she believes the left should not become too “dewy eyed” about that time

I MARVEL that people still remember the events of May ‘68 in France.

It started in Paris, but the ‘provinces’ caught the bug too.

I was 16, my parents were socialist, later joining the small but very progressive Parti Socialiste Unifié formed by Michel Rocard, a proponent of workers’ cooperatives. He did eventually become part of the socialist establishment of course. But it was a heady time.

My older sister was in her final year (the Terminale), at school (Lycée), and I was coming behind two years down. She was part of that generation who got her baccalauréat without sitting the written exams, such was the disruption!

We picketed our school, blocking the entrance, stopping classes, picketed the “sous-préfecture”, that representative of the almighty State in the regions or provinces.

My friend and I hitch-hiked to the bigger city, Clermont-Ferrand in the heart of Auvergne, went to amphitheatres at the university and listened to speeches delivered by young men – almost exclusively.

We went on demonstrations through the streets of Clermont, sometimes arms in arms with my French teacher. Her husband, who became the Principal at that Faculté de Lettres, was later to run a campaign to become the PSU Mayor of our small town, in the local election after 1969.  Even my mother, then a typical 60s housewife, got on to his list as a Councillor candidate, and got slagged for her pains in the local press by the resident Catholics who thought she wasn’t enough of a ‘mère de famille’ with only three kids, instead of the large brood they all had. That’s for the local colour. Tempers were running high.
We made posters for the election in the garage on our table-tennis table!

But you have to understand that it was a very middle class affair. In those day, the working classes were hardly represented in universities. Yes, students sought and got at the beginning the participation of factory workers. There were strikes all over the country, but not for very long. There were heady moments, and yes, in the provinces, we hung on the radio  to hear about the dreaded CRS (Compagnie républicaine de sécurité) beating people up, and students throwing the famous pavés. To this day the name CRS fills me with a frisson of fear, synonymous with brute force all over the world.

The figureheads of the évènements de mai in France were Daniel Cohn-Bendit, Jacques Sauvageot, Alain Geismar, and Alain Krivine. The latter was on the far left, la Ligue révolutionnaire communiste, and later became a MEP, Sauvageot seemed to have joined the PSU, and Geismar trained at one of the most elitist Grandes Écoles – a completely unique French phenomenon –  and I suppose joined the French republican establishment too.  Cohn-Bendit I am sure you know about. Right wing opposition and press made claims about his foreign and Jewish origins, so we all chanted “Nous sommes tous des Juifs allemands” (“We are all German Jews”).

Anyway, before the far-left here becomes dewy eyed about the May rising, it should not forget or underestimate the historical and political context.

We had been under the quasi-dictatorship of a General since the end of the war. De Gaulle had appropriated most of the powers the Constitution – written by him – could give him, bar the Judiciary. He was old, in our eyes. He was part of the old order; that of conservative, Catholic France. The Catholic Church had a big influence still, in those days. It was regressive, especially towards women’s rights. There were some brave priests who became prêtre-ouvriers, working in factories. But they were a minority of well-meaning idealists.

The world was changing around conservative France.  Most of all, women were changing. The women’s Liberation Movement in the States had started. We began to read Germaine Greer; Marylyn French. We started to fight for abortion rights, for access to the Pill. In the meantime, la nouvelle vague of French film-makers, like François Truffaut, Jean-Luc Godard, Éric Rohmer, Claude Chabrol and Jacques Rivette contributed to a remarkable cultural shift.

Do not, however, let it be forgotten that these movements, political or cultural, were led by young, well-educated men, by and large. The worse were the far-left guys. The révolutionnaires. If you didn’t sleep with them, you were a stuck-up intellectual. If you did, you were joining the ranks of slags. Yep. It was very difficult, even in the early 70s, when I went to university, for a young woman to rise in an amphitheatre and speak in public. Looking back, sexism was eye-watering.

Of course we marched against Vietnam. We wept when the tanks invaded Prague. We railed against racism in the States.

And look at it now. France is just as institutionally racist as Britain. Well, almost – just in different ways.

Those wide-eyed lefties joined the establishment. Communism in France, once a political force, is dead. The socialists are also dead in the water.

I hope that whatever is discussed at CommonSpace’s Forum on May ‘68, it will be not be with the kind of nostalgia that erases the whole context. Yes, it was exciting to be so young in 1968, but remember that a year later the conservative Georges Pompidou was elected, and then we had a series of right-wing, old style politicians. They never really went away. France is actually, in my humble opinion, a conservative country with a small c. And still a macho one, if you scratch the surface.