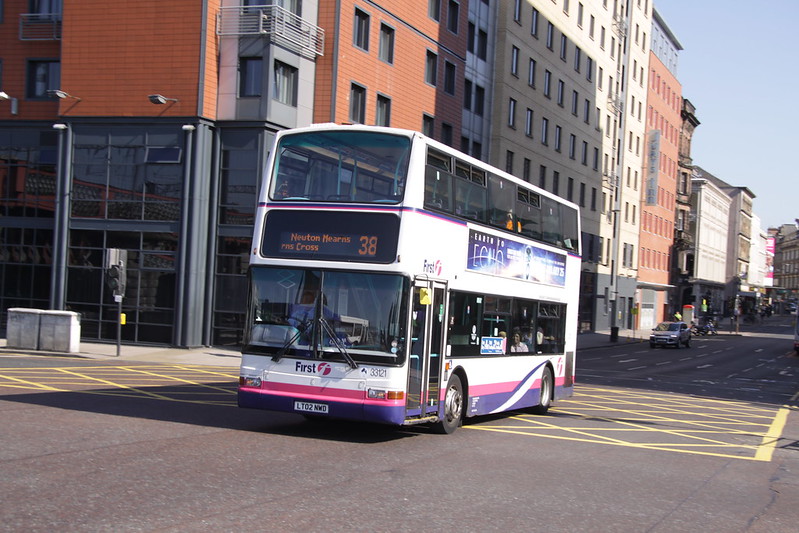 Big win for bus travel in Transport Bill, while amendments brought some disappointment for anti-pollution campaigners, cyclists and people with disabilities

AFTER HOURS of debate and voting on amendments to the Transport Bill yesterday (9 October), campaigners for sustainable and affordable transport have celebrated key wins on public ownership of buses and the Workplace Parking Levy.

However, the legislation, which is expected to pass tonight with SNP and Green support, has left some disappointed that it will not go far or fast enough on cutting air pollution through Low Emission Zones, supporting the needs of cyclists, walkers and waterways, and ensuring accessibility of public transport for people with disabilities.

Successful amendments to the Bill which will allow councils to run their own bus services have been welcomed as a big win for campaigners including the Get Glasgow Moving campaign. This is one of the key reasons cited by the Scottish Greens for their decision to support a Bill which they originally said “lacked ambition”.

“This wouldn’t have happened without years of campaigning from passengers who have been continuously failed by the current privatised system which favours shareholder profit over the needs of our communities.

“What we want to see now is Glasgow City Council and surrounding local authorities utilise the new powers to take First bus into democratic public-ownership. With Strathclyde Partnership for Transport already in public-ownership, we believe they are in the perfect position, with support from local authorities, to take over First’s buses and depots and create a publicly-owned bus company that puts passengers first.”

“Publicly-owned buses that are affordable, reliable and accessible will not only help us tackle the climate emergency by taking cars off the road, it will help us fight poverty by allowing more people to access employment, education and health services easily and cheaply.”

In order to make this vision a reality, Menzies said the Scottish Government must now “fully support and provide funding for local authorities who want to run their own bus services”.

These developments have also been welcomed by environmental campaigners from Friends of the Earth Scotland, who say bus deregulation has been “a disaster for Scotland”.

Thomson urged all parties who support the bus ownership amendments to “back the whole Transport Bill” to bring them into law.

Scottish Labour, which put forward the amendment on public ownership of buses, is staunchly opposed to the Workplace Parking Levy which was also passed in an amendment yesterday with SNP and Green support.

The levy would allow councils the option of charging employers for parking spaces, and has so far been backed by Glasgow City Council and Edinburgh City Council. Scottish Labour has argued that this will put a strain on “cash-strapped public bodies” which will likely be passed on to workers.

A number of Scottish trade unions have opposed the levy on the same basis.

Friends of the Earth’s Gavin Thomson, however, has said that this position is misleading, adding: “We need to have realistic, evidence-based conversations about the choices we must make to reduce climate emissions from our transport system.

“Some MSPs would rather peddle the fantasy that everyone will be able to drive their car wherever they like, and park wherever they want with no restrictions and no regard for the consequences on other people or the planet.

“Workplace Parking Levies have a track record of bringing much needed investment to transport infrastructure, and creating healthier places to live and work. The revenue from this levy can be used to help councils set up and run their own bus companies.”

Critics of Scottish Labour’s position on the levy have pointed out that a parking level was introduced by Labour-controlled council in Nottingham and included in Labour’s manifestos for Glasgow and Edinburgh City Council. The idea was first proposed by Scottish Labour MSP Sarah Boyack in her role as Transport Minister under the Scottish Labour government.

Friends of the Earth Scotland has said that the rejection of amendments which would have sped up the introduction of Low Emission Zones represent a failure by MSPs to take urgent action to reduce climate emissions.

The Transport Bill will introduce Low Emission Zones in Glasgow, Edinburgh, Aberdeen, and Dundee, including ‘grace periods’ to allow councils up to six years to fully implement the zones.

Campaigner Gavin Thomson said: “The Climate Emergency means we don’t have time to pass up opportunities to make transformative change to the way we move around. Our car-dominated transport system needs to change, and this Bill leaves the government and councils with so much more to do.

“Low Emission Zones will improve the air we breathe, by restricting the most polluting vehicles from cities. It is great that these are now enshrined in law, but their weak rules and unnecessarily long phase-in periods mean they are wholly inadequate for the scale of the public health crisis we face.

“The amendments to allow councils to act sooner were ignored so children growing up in Scotland’s cities are now condemned to another 6 years of choking on toxic air.”

An amendment to the Bill which would have required bus operators to produce bus information in accessible formats upon request and provide bus drivers with disability awareness training every two years was rejected due to a lack of support from the SNP and Conservatives.

Sight loss charity Royal National Institute of the Blind (RNIB) Scotland said they were “disappointed” by the result.

A spokesperson said: “We appreciate Colin Smyth MSP proposing this amendment on the issue of bus accessibility and we will continue to campaign to remove barriers to public transport for blind and partially sighted people.

“For example, slowing down at bus stops to give people a chance to identify the bus-number; waiting for a passenger with sight loss to find a set before pulling off too quickly (especially if they have a guide dog); announcing when the bus has reached the destination the passenger gave.

“Presenting information that is accessible about timetables and services is also important. Too often timetables attached to bus stops are in minute print or the transparent panels which they’re behind are cracked or glazed.

“Bus travel can be an important – in some cases, the only – method of transport for blind and partially-sighted people, connecting them to their work, family and friends when driving simply isn’t an option.”

“It could have improved experiences of passengers with a disability and those living with dementia.”

Advocates of cycling, walking and waterways have also expressed disappointment about the Bill following yesterday’s vote on the proposed amendments.

One amendment, also put forward by Colin Smyth MSP and rejected by the SNP and Tories, would have made it illegal to park in cycle lanes.

Cycling UK organised a campaign which saw  5,500 emails sent to MSPs by members of the public who backed the change.

Cycling UK campaigns and policy manager for Scotland Jim Densham said: “This is a missed opportunity to finally close a legal loophole so it would once again become an offence to park, as well as drive or ride, in a mandatory cycle lane that is marked by a solid white line.

“We want everyone to understand that parking in a cycle lane risks the safety of people riding bikes because a vehicle parked in a cycle lane forces them to move or swerve out into traffic, putting them in danger.”

Spokes Porty, a local cycling campaign group, tweeted after the vote: “So disappointing to see lost opportunities today in the Transport Bill in the Scottish Parliament. Struggling to understand why pedestrians and people who ride bikes are not being prioritised despite declaration of the Climate Emergency and our serious public health issues.”

Scottish Canals, which manages Scotland’s inland waterways, also stressed the need for greater focus on the needs of “walkers, cyclists and boaters”.

CEO of Scottish Canals Catherine Topley said: “As the custodians of Scotland’s canals, we understand the potential of sustainable travel to revolutionise our approach to transport strategy and respond to the climate emergency.

“While we are supportive of amendments calling for a focus on public consultation and transparent reporting, we note that the overall focus of this Bill is on cars and parking. We would suggest that greater support for developing our inland waterways and footpaths could lead to a more holistic response.

“As our partners at Sustrans Scotland note, a modal shift from cars to walking and cycling has the potential to cut carbon emissions faster than transition to electric vehicles; our inland waterways have an increasing role to play in this arena.”

The final vote on the Transport Bill will take place in the Scottish Parliament this evening.