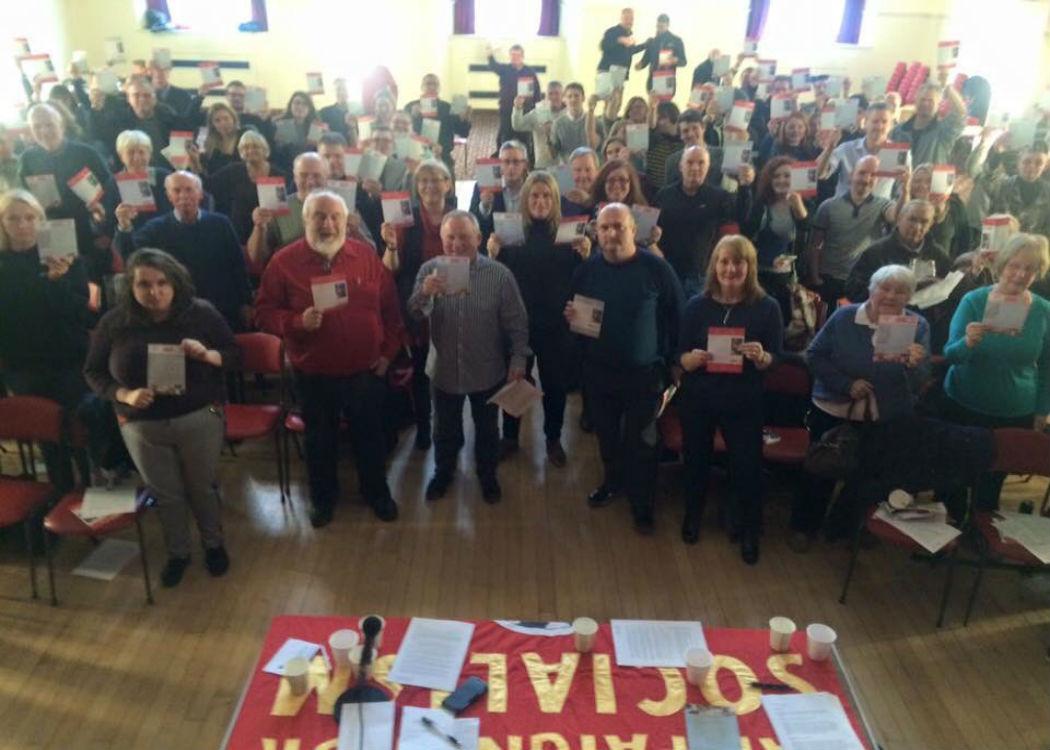 This comment on its own illustrates the changes the party has gone through in just a few short months. Simpson clearly feels encouraged to make these remarks in the company of friends, among a hundred or so activists at the launch of Momentum Scotland on Saturday 21 November, a campaign in support of Jeremy Corbyn’s new leadership of the Labour party.

The former Lothian regional councillor was debarred from future candidature in 1990 for supporting non-payment of the Poll Tax, a staple of the revolutionary socialist group Militant, which was expunged from the Labour party in the 1980s and 1990s.

“I feel a bit hard done by given Jeremy Corbyn broke the whip 500 times and became leader of the Labour party. I broke the whip twice and was debarred from being a candidate,” Simpson laughs.

“I’m engaged in trying to recruit other former Militant members who have drifted away from Labour.” Keith Simpson

Now Simpson is back, and he’s bringing his friends: “I’m engaged in trying to recruit other former Militant members who have drifted away from the Labour party,” he says.

If Labour parliamentarians and activists on the right and centre of the party could elaborate in a sentence why they oppose the formation of Momentum, it would be the above sentence.

It gets worse: “I continue to have a Marxist view about economics and about the divisions in society. It’s quite right to have Marxists in Labour and we’ll argue our case in the party,” Simpson says.

It’s fair to say that most of those attending the launch of the Scottish wing of Momentum don’t share Simpson’s doctrinal certainties.

One of the day’s main speakers, Martyn Cook , tells me that the mood of new recruits to Momentum and to Labour is “populist”.

The ideological hue of Momentum in Scotland is very much presently conditioned by Campaign for Socialism (CfS), the largest Scottish Labour left faction. Indeed, for now at least, it seems that Momentum and CfS are interchangeable outfits.

Momentum, which emerged from Corbyn’s leadership campaign, but which is ostensibly organised separately from the party leadership, had its UK launch in London. However, the keynote speaker on that ocassion was the shadow chancellor and close ally of Corbyn, John McDonnell.

No such glitz and glamour for the Glasgow launch, where the party leadership and apparatus is still firmly wedded to the centre.

But perhaps more importantly, Momentum Scotland is attracting new and younger members, some of whom are violently off message.

One new member speaking from the floor, Callum Gray, says that Momentum should support the candidature of George Galloway for London mayor over the Labour centrist Sadiq Khan.

Speaking to CommonSpace after his contribution, the 18 year-old student says: “George Galloway’s beliefs and ideals about trade unions and independence make him a mirror reflection of Labour. He is a Labour man without a membership card. A lot of people sitting in parliament under a Labour banner are Tories with Labour membership cards.”

The idea of supporting Galloway over Khan, seen as untrustworthy, meets with minority approval in the hall. But the notion is gently knocked down by Elaine Smith, Labour MSP for Coatbridge and Chryston.

“When Labour candidates stand, we support them,” she says.

“A lot of people sitting in parliament under a Labour banner are Tories with Labour membership cards.” Callum Gray

It’s a mark of how green some new recruits are that they are unaware of some party political taboos. But Smith also announced that the right wing of the party are “the real entryists”, to cheers.

Fear pervades the right of the party over the real intentions of Momentum. One of Corbyn’s own shadow cabinet, Michael Dugher, described the decision to establish the Momentum “faction” as “crazy” .

One of Momentum UK’s main organisers, James Schneider, tried to allay fears by telling the Huffington Post that the organisation did not have a “hit list” of anti-Corbyn Labour MPs to be deselected from their seats at the earliest opportunity.

The great fear of the Labour right is that Momentum is a battering ram against party dissidents. The left claims it is meant as a campaigning wing of the Corbyn movement, to draw people towards the party.

Disputes between the left and right of the party are not the only source of bitterness that attends the conference. More than one speaker during the event referrs to the “bloody SNP”.

Ian Drummond, who says he is considering joining the Labour party, says he was drawn to the party during the No campaign.

“By defending Corbyn we are in fact defending Britain.” Ian Drummond

He tells the hall: “By defending Corbyn we are in fact defending Britain.

“If Corbyn goes, all those terrible things we narrowly avoided last year [with independence] will come back,” he adds.

But there were also voices calling for a degree of rapprochement with the SNP. Stephen Low, a leading member of CfS, told the rally: “We have to take the SNP seriously, because they are the overwhelmingly dominant party in the country. We also have to take them seriously on matters like Trident, where we can work together.”

Yet besides feelings of hostility, frequently overwhelming, there is a general mood of hope and a belief in the re-birth of the Labour party among what is, particularly in the context of a Scotland which now regularly draws thousands to rallies, a modest gathering. The Scottish contingent of Momentum is clearly the smaller sibling and Scottish Labour hasn’t escaped its low ebb. But they genuinely feel part of the larger southern wave.

That mood comes as much from older members returning after a long hiatus as young people for whom Corbyn is their introduction to politics.

Anne Mullin, a woman in her 80s who has recently re-joined the party having left over the Iraq war in 2003, tells CommonSpace: “I thouroghly believe in Jeremy Corbyn.

“I was really delighted with the meeting. People were not just there as numbers, they had a passion for what they are saying.”

Asked wether she thought Corbyn could be the next prime minister, she says: ” I hope so. I thoroughly believe in him. But he’s up against the media and the Tories and worst of all – Labour MPs.”