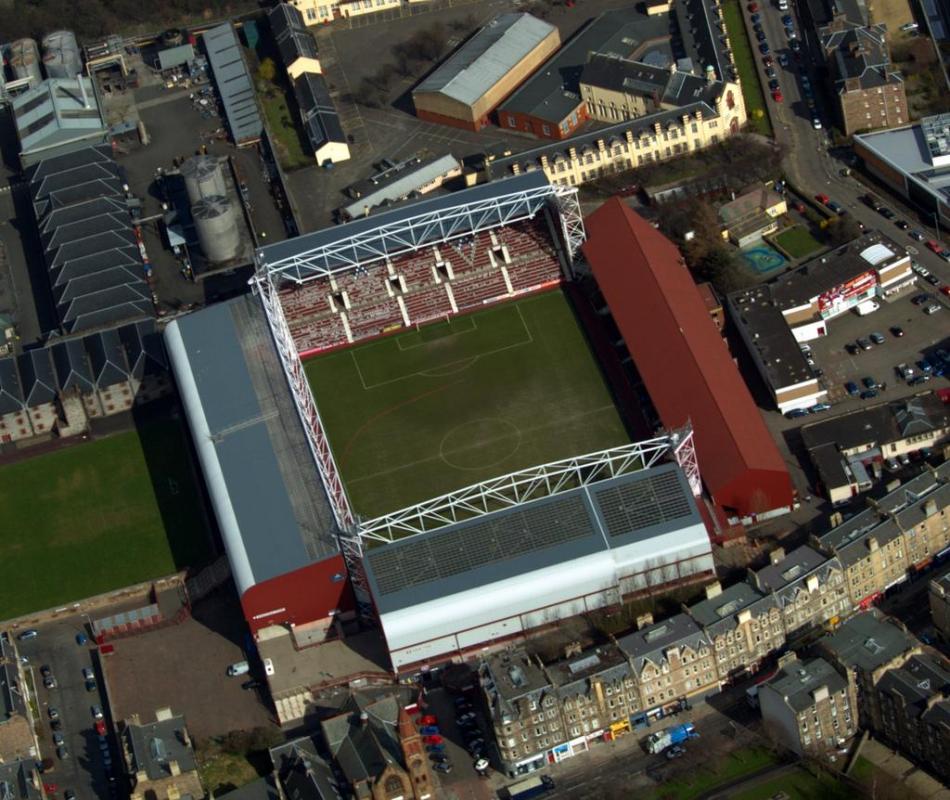 Football clubs have struggled with financies and debt in Scotland. Could the solution to these problems be returning ownership to the communities keeping their teams alive?

SCOTTISH football is in flux. The ongoing ownership and tax tussle at Rangers FC has often found itself playing in the Scottish court system rather than on the football pitch. And that’s by far been the only inquest into allegations of mismanagement.

In Edinburgh, fans of Hearts and Hibernian have responded to financial crisis by launching campaigns for fan ownership – to take the beautiful game back into the hands of the people. Fans groups at Rangers have launched mass share purchases to wrestle back control from the club board. But can this fan power overcome the corporate crisis facing the sport?

Foundation of Hearts may provide the answer. In the last year an impressive array of fans groups, former players and sympathetic businesspeople created a coalition that saved Hearts from administration. It was people power – and people’s wallets – in action.

Now the coalition is organising a tricky transition from a privately owned club with financial troubles towards a community-owned club with high ambitions.

“It is clear that without the supporters of the Foundation, Hearts may not have been in business today so they should give themselves a very big slap on the back. We will be presenting the FoH accounts, concluding the election of our first democratically elected Director to the FoH Board and answering all questions.”

Fans forced to save their clubs is nothing new. Scottish football witnessed a series of financial meltdowns from the late 1990s onwards.

The success of Foundation of Hearts did not go unnoticed over at their city rivals Hibernian FC, based at Easter Road stadium in Leith. Sir Tom Farmer stepped in to save the club during recent financial turbulence, yet the team’s relegation has led to demand for greater change from fans.

‘BuyHibs’ is the response. Led by former Hibernian player Pat Stanton, it aims to emulate the success of the Hearts buy-out scheme. Fans are being asked to chip-in a monthly donation to provide the funds to purchase the club.

Neil Wheelan, representing BuyHibs, says: “BuyHibs are hopeful that over the coming months the Hibs fans will be fully engaged in discussions surrounding the future of the club and its ownership. The club needs significant change and a new direction of ownership.

“It is apparent that nobody cares about the club as much as the fans do and it is our responsibility to drive positive change at Hibernian and help lead the club to a better and more unified place. BuyHibs want the best possible future for the club and we are determined to ensure that this is achieved, that our club will get stronger and back to the top of Scottish Football and retain ownership of its assets.”

This new year the Hibernian board responded by launching a share option, which would give Hibs fans a 51 per cent controlling stake and elected representatives on the board.

However, BuyHibs is insistant that any deal represents the long-term interests of the club and includes financial transparency.

“The only mistake we made was in underestimating the scale of mismanagement at Hibs,” said fellow fans’ group ‘Hands on Hibs’ in a statement to supporters.

A dispute on the share offering has stalled progressed, but more talks are expected between the groups.

Meanwhile at Ibrox, the Rangers Supporters Trust (RST) has received a surge in support as part of a long-running conflict over control of the club. The club board rupturted as dodgy businesspeople came and left. Financial problems continued even after Rangers were liquidated in October 2012. The RST now has approximately two million shares.

Rangers First, operating on a similar model to Buy Hearts, has also built up a two million shares through gradual fan financing. Dave King, the latest controversial shareholder to seek control at the club, has promised to work with the fans’ campaigns.

Fans forced to save their clubs is nothing new. Scottish football witnessed a series of financial meltdowns from the late 1990s onwards.

In each case the clubs re-emerged in a new form. But that cannot obscure the systematic failure of football finances. Millionaires appeared and disappeared. Wages at the top end of the league soared then sunk. Stadium requirements were heightened then reduced, forcing clubs to develop way beyond their means and needs.

This could breed despondency from fans. Even at a national level tartan army fans were enraged at recent Scottish Football Association ticket pricing. The game against Ireland at Celtic Park cost between PS40 and PS50 for an adult ticket. The Scotland versus England friendly was even higher at PS55.

So is football now an extension of a greedy profit driven culture? Do those at the top of the game – be it club chief executives or national body representative – care about the relationship with fans and communities?

The lack of support for community ownership or stronger regulation from governing bodies has a striking similarity to failures in other business sectors.

A spokesperson said: “Fans are the lifeblood of the game. The SPFL believes that involving and engaging fans helps cement the crucial relationship between clubs and the communities that surround and sustain them. However, there is no one single governance model that suits all clubs; what’s vital is that clubs work out the best governance model for them.”

The lack of support for community ownership or stronger regulation from governing bodies has a striking similarity to failures in other business sectors.

The Financial Services Authority remained complacent and toothless in the lead up to the banking crash of 2008. Energy regulator Ofcom lacks the powers or the will to intervene in energy price hikes causing fuel poverty. And the Press Complaints Commission was a self-regulated failure when it came to phone hacking.

Football at its worst shares these failings – inaction in the face of injustice, complacency in the midst of corporate evasion, and the creation of an environment where profit and price push out the values of solidarity and fairness that sport claims to represent.

There are still tens of thousands of people across Scotland who see things differently, and are working hard to revamp the culture of corruption.

Alison Johnstone, Scottish Green Party MSP for the Lothian region, has been supporting fans’ campaigns for a number of years. The party’s ‘Fans First Initiative’ wants to change government law so fans have the right to purchase their club with a simple government approval.

While the legal change hasn’t yet gained support, Johnstone does see opportunities for progress: “I strongly believe that those most likely to be the best guardians of these community assets are the very communities themselves,” she says.

“No fan should be exposed to the heartache of reckless owners taking their beloved team to the brink of being wound up, and then be expected to dig deep at the last minute to rescue it.” Alison Johnstone MSP

“The progress currently being made by the Foundation of Hearts is encouraging, and it is clearly inspiring others to explore similar options, with Hibs fans the latest to consider how best to ensure a sustainable future for their club.

“No fan should be exposed to the heartache of reckless owners taking their beloved team to the brink of being wound up, and then be expected to dig deep at the last minute to rescue it. There also needs to be a secure ‘exit strategy’ for responsible owners who decide, for whatever reason, to call time on their period as a club’s custodian.

“I am confident that the vast majority of fans of Scottish football clubs will support my proposals, but in order to get them into law, we need to bring that mass support to the attention of Ministers in the Scottish Government and Members of the Scottish Parliament.

“If we do not seize this opportunity, the risk is that it could take years to deliver any of the substantive change that Scottish football needs to see.”

The interest in ownership and participation has been built in response to club failures and by ambitious fans who wanted to change their clubs. As a result, interest has grown and today four Scottish clubs – Stirling Albion, East Stirlingshire, Dunfermline Athletic and Clyde – are owned by their fans. Many other clubs, including Motherwell and Kilmarnock in the Premiership, have improved fan representation.

Supporter Direct Scotland (SDS) is a key organisation within these talks. Michael Wood of SDS is confident that fan ownership and representation is gaining traction.

“When there’s a threat to a club’s stability, like with Hibs, then it’s possible to mobilise support. Otherwise, when a club is doing well it’s difficult to get fans to campaign.” Michael Wood

“We’re still at a stage where campaigns gain most traction when clubs are facing problems,” he says. “That’s the catalyst. With Stirling Albion in 2010 there was no one else to put money in, so the fans stepped in.

“When there’s a threat to a club’s stability, like with Hibs, then it’s possible to mobilise support. Otherwise, when a club is doing well it’s difficult to get fans to campaign. Most fans are happy to go along and watch the team. Whether this culture will change is hard to say.”

There has undoubtedly been a divide between clubs like Hearts and Rangers, where turbulent owners disputes led to wider fan campaigns for accountability, representation and ownership. Meanwhile over at Celtic, fans have focused campaigning efforts on pressuring the Celtic board to introduce the Living Wage for staff.

Wood is confident that more support will develop for fan participation, including from governing bodies like SPFL.

“Governing bodies want to see the clubs doing well and doing well by their fans,” he says. “If the big clubs develop new relationships with their fans then it will grow. Supporters are the one constant in a football club. It’s not like any other industry where consumers – if they don’t like a product – go and buy something else. It doesn’t work like that.”

The supporters group has been campaigning and supporting fan proposals as a source of infrastructure and advice. While SDS supports fan ownership in principle, it understand its limitations.

“Whether you are supportive of community ownership or private ownership, there is no single ownership across the board that will work for all clubs. It depends on the circumstance,” Wood continues.

Is there the potential for that success to be replicated here? Wood says yes.

The events in Edinburgh and at Ibrox in the following months will put that theory to the test.