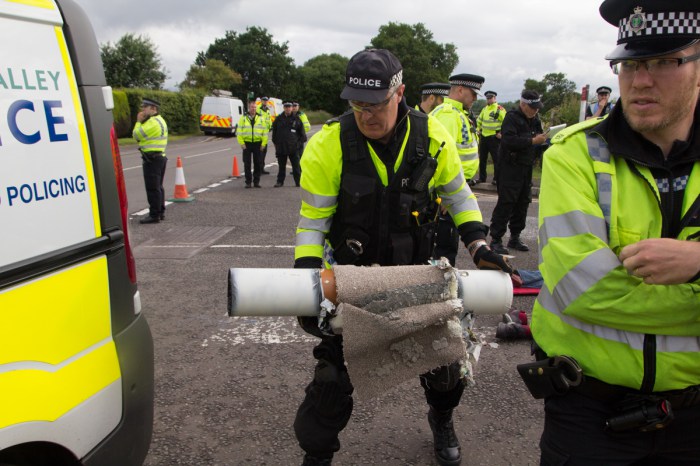 MEMBERS of a Christian group have been acquitted in the High Court of wilful obstruction after they blockaded a Trident bomb factory in England.

Five activists were prosecuted in Reading in January after they used super glue and arm locks to block a road outside Burghfield Atomic Weapons Establishment in Berkshire.

Their successful appeal to the High Court found yesterday (31 August) that the protestors were not obstructing a public highway.

The protestors appealed from a position of conscience and moral obligation, and on the basis that nuclear weapons are illegal under international law. That argument was rejected by the Reading Magistrates Court, but just a few months later, on 7 July, 122 nations backed the nuclear weapons ban treaty.

“We stand by what we said in court: Trident is an illegal and immoral waste of money, a crime against humanity and God. The prosecution said we could just have joined in a prayer vigil to the side of the road, instead of lying in it; we said our consciences wouldn’t allow that. We believe prayer is important but sometimes our faith compels us to put our whole bodies in the way of injustice and violence.

“The Bible says religious acts are meaningless unless we also stand up for the poor and needy; we are called to bring a just peace with hope for all. We will continue to seek peace, and to take the consequences of doing so. We welcome the verdict today, but whatever the courts say, we will continue to oppose the evil of nuclear weapons.”

Christians and other religious groups such as Buddhists have long protested against the Trident nuclear weapons, based on the Clyde at Faslane in Scotland and supplied by a network across the UK.

The weapons, set to be renewed by the UK Government at a cost of £205bn over the lifetime of the weapons, are opposed by the Scottish Parliament and by a large majority of Scottish MPs.

The release of the protestors, members of the Christian anti-war group Put Down the Sword, comes after protestors from allied groups Trident Ploughshares and Scottish CND were released from jail.

Brian Quail and Angie Zelter were released from prison on 26 July. Bail conditions which barred them from protesting at Trident sites were dropped after a campaign of public pressure against the measures.

The so called Trident two were initially arrested on 12 July, again for peacefully blocking a road at a the Coulport Trident site.

The international ban on nuclear weapons will come into effect on 20 September. The UK and eight other nuclear armed states have found themselves isolated by the overwhelming international consensus behind the ban.

Picture courtesy of Put Down the Sword