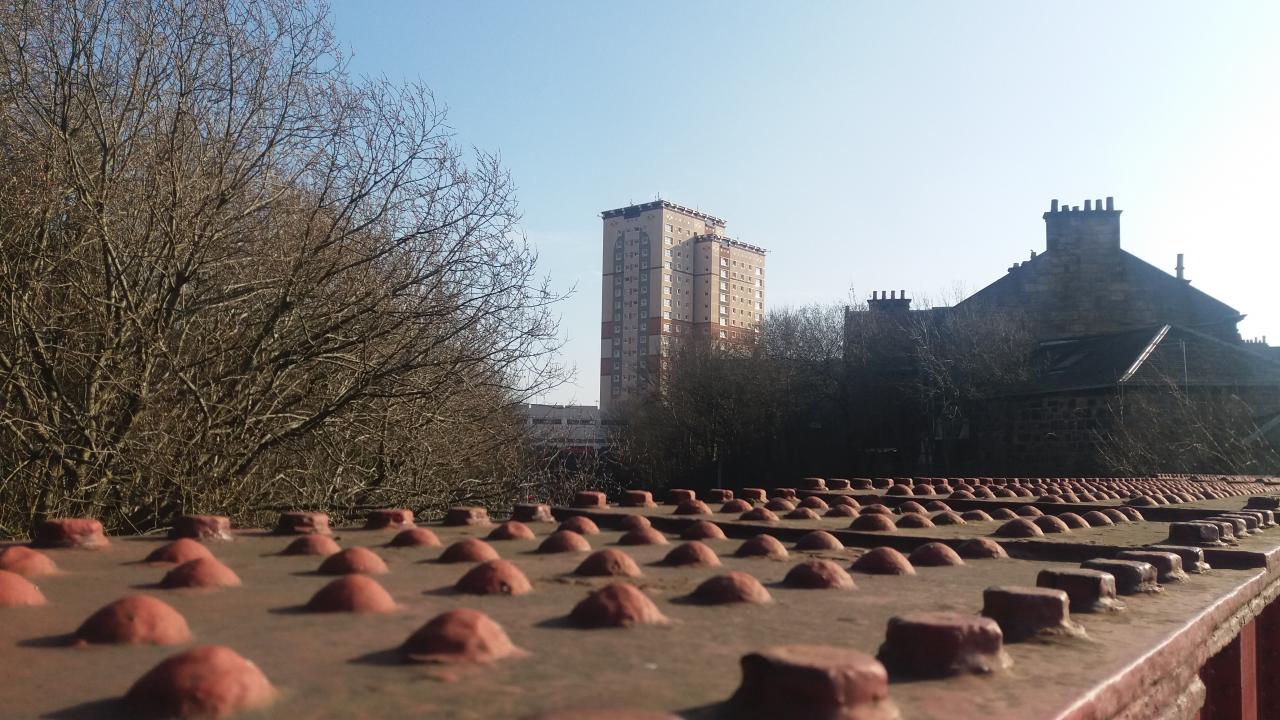 Sean Bell reports from Motherwell, a town often defined by its history, but those working to combat poverty and austerity within the town are facing contemporary challenges

BEYOND Motherwell’s precincts, perception of the town is often defined by its past.

Once ‘Steelopolis’, capital of a largely vanished industry, today Motherwell arguably exists in the Scottish imagination as a testament to deindustrialisation’s legacy, and the cruelty of Thatcherism in particular.

When the gates shut on the Ravenscraig steel plant in 1992 – an intentional catastrophe that underlined yet again Margaret Thatcher’s determination to achieve economic transformation via industrial destruction – the cost was not just the tens of thousands of jobs that went with it, but the generations left abandoned in its wake.

That pain persists through political consequences – long memories, coupled with an openness to radical change – that have lasted until the modern day; it is likely no coincidence that Jeremy Corbyn made a point of visiting Motherwell in 2017 to make the case against Toryism past and present, or that the majority of the town’s inhabitants voted for independence in 2014.

Yet viewing Motherwell solely through the prism of traumas and tragedies past is a habit of outsiders; the town itself has more contemporary concerns, exemplified by the recent, generally uncelebrated passage of North Lanarkshire Council’s budget this week.

In total, £16 million worth of cuts were agreed in order to secure the minority Labour council’s budget, which passed 44-28 with the addition of Conservative amendments in order to secure Tory support and squash the local SNP group’s alternative proposals. 43 full-time equivalent posts will now be lost in consequence of the budget, despite the administration’s claim that there will be no compulsory redundancies. In addition, council tax will again rise across North Lanarkshire by three per cent, just as it did last year.

Despite this heavily qualified victory, council leader Jim Logue was hardly celebratory, reiterating that the funding settlement is “catastrophic” and emphasising the £30 million budget gap that endures despite the harsh adjustments.

While all political parties involved may have acknowledged the inevitability of cuts, the latest budget is indicative of the slow chipping away of services and benefits that may seem minor in the national context, but which have left the community on a perpetual simmer of controversy and confirmed that, in Motherwell as in many other communities across Scotland, austerity remains a fact of life.

Primary 5 pupils will now lose out on free swimming lessons; local area partnership funds will be halved; burial fees will increase to £1936; and, as the NLC SNP group’s finance spokesperson Jim Hume pointed out, despite a public outcry, school janitor posts are under threat, while the income of remaining janitors may be slashed.

READ MORE: Anger in North Lanarkshire as Tories back Labour to form council

Speaking to CommonSpace, SNP MP for Motherwell and Wishaw Marion Fellows echoes SNP councillors’ characterisation of the budget as a Labour-Conservative collaboration, but accepted that between the UK Government, Scottish Government and local government, the passing of blame is equally familiar.

“A perennial problem”, Fellows puts it. “I can remember when it was a Labour administration in Holyrood, and some of their most vicious critics were Labour councils. There’s always going to be some dissonance between local and central government, but I think it becomes a lot more vicious when there are different parties at different levels. They tend to become a lot more vociferous and blame the central government for all their issues. That’s the way it has always been. I don’t think it’s a good way – I think there should be far more working together.”

Motherwell is one of the areas where the party political claims and counter-claims that have surrounded the North Lanarkshire budget cease to be abstract, and where the reality of austerity is not only apparent in its debilitated town centre, but now so familiar it is difficult to imagine anything else.

In 2013, hundreds of trade union activists dressed as grim reapers descended on the Council’s Motherwell headquarters, in a furious but ultimately failed attempt to prevent a £73 million austerity package that set the tone for the years to follow. In 2015, bitter memories of Ravencraig were prompted by the near-closure of steel firm Tata’s Dalzell plate rolling works in Motherwell, only saved the following year following Scottish Government intervention to secure a deal with Liberty House, but underlining the fragility of the area’s few remaining sources of steady employment. And last year, the End Child Poverty coalition revealed that more than a quarter of children in the Wishaw, Motherwell and Shotts area live in poverty. 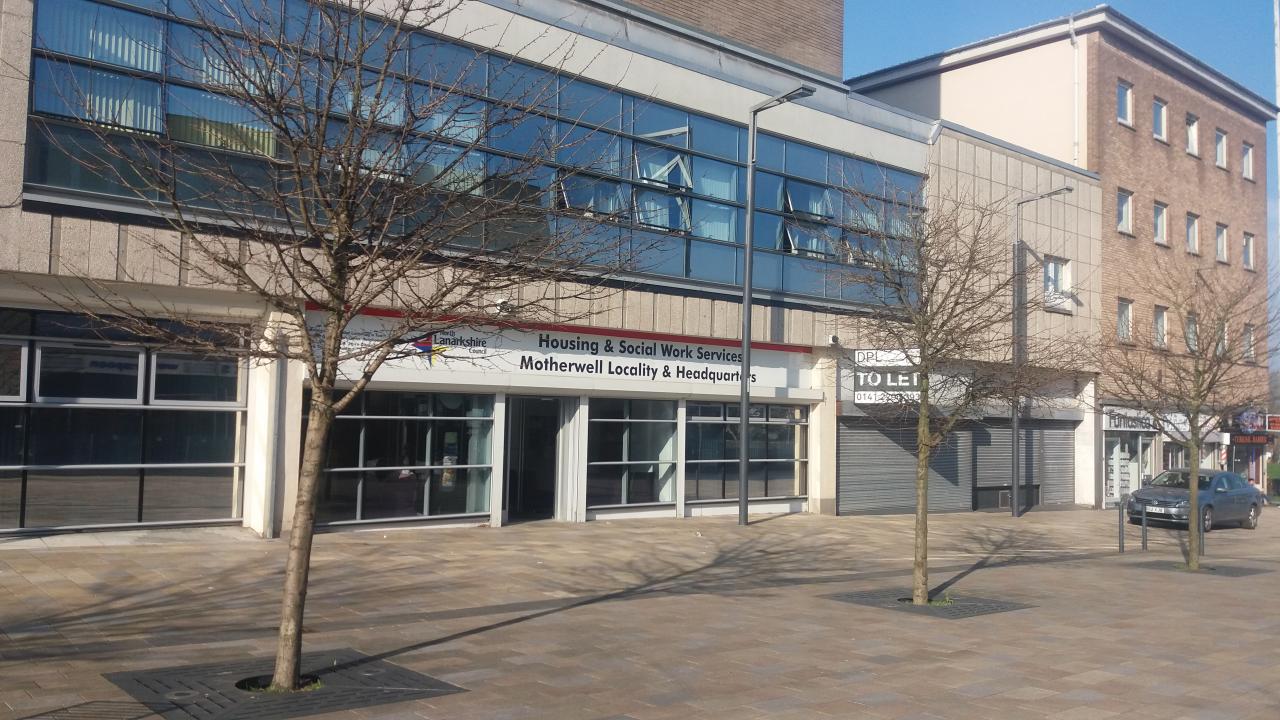 Fellows says the impact this has all had on Motherwell has affected the town centre, but that solutions are not necessarily straight forward.

“We do need to look at Motherwell and Wishaw town centres,” she says. “It’s not an unusual problem – it’s UK-wide. But we do need to look at how we can best support local businesses, and I think there needs to be a more joined-up approach between local and national governments.

“I think of the experiences of places like West Kilbride, where they took a theme and they ran with it, and now it’s a craft town. The difficulty has been to think about what we could use as a theme. In Motherwell, I think the fact that the town centre isn’t owned by the council, I think that can sometimes be an issue.”

A greater degree of public ownership “might help”, but “at the moment, I think what is needed is a kind of summit to come up with a strong idea for the theme in Motherwell. At the moment, a cohesive force to push it forward seems to be lacking.”

Such a cohesive force, if and when it arrives, will be the responsibility of politicians, and a product of days and years to come. Among those facing down austerity and poverty in Motherwell right now is Gordon Thomson, a manager at the Lanarkshire Community Food and Health Partnership charity, which helps provide the logistics and expertise to help reduce health inequalities in vulnerable communities, including such schemes as food co-ops, healthy eating initiatives and third sector responses to council programmes over the past 15 years.

The need for such anti-poverty action is pronounced in Motherwell, Thomson says: “especially in the austerity era”.

“There’s huge areas of need. In North Lanarkshire, the council has actually been very pro-active. We’ve been involved in a variety of projects, especially over the past five years. Across 2013 and 2014, we coordinated what was known as North Lanarkshire Food Aid, which was a response to the upsurge in food bank usage. Early on, when the food bank crisis became apparent, there was a concerted local drive to try and mitigate the effects of that, and not let it get out of hand.

“We were starting to get inundated with people needing crisis food, and we were conscious that an increased need for food banks would put more strain on other services, and we were concerned about what would happen if they couldn’t cope. We found initally that about 80 per cent of those coming to food banks didn’t need to be there. We basically created a financial pathway where the people who could make referrals [to food banks] – Citizens Advice, health visitors, social workers, etc – rather than directly referring people, they could go to the welfare fund and we could triage them financially, get to the root of their problems and try and sort them immediately.

“Our own measurements over the past two or three years, we found that we’ve been reducing food bank usage by about 20 to 30 per cent per year, but we’ve obviously got the shockwave coming of Universal Credit being rolled out in North Lanarkshire. We’re hoping that, despite that, we can stop the need for food banks increasing by hundreds of per cent, as it has in other places like the East End of Glasgow.”

North Lanarkshire has the highest rates of diabetes and heart disease in Scotland, and Thomson and his colleagues have tried to address this through holiday lunch clubs and similar initiatives, as well as the council initiative Club 365, which has provided 10,000 meals to children over the past year. In Motherwell alone, Thomson said they saw roughly 50 children a day making use of their hubs for these services.

Inevitably, Thomson says, lead up to the annual council budget is “really tense”: “From the inside, working with a third sector organisation that relies on the council, it can be very frustrating to organisations like mine. We’re under real pressure, but we appreciate the council is under pressures themselves. We’re constantly trying to make a case for what’s needed.”

Despite the recent increased prominence of debates around local government reform, particularly from the Scottish Greens, Thomson advocates more strongly for a national consistency of services than for the further empowerment of local authorities.

“As long as those cuts continue, there will be less and less prevention being done in those communities, and it will lead to more and more sticking plasters.” Gordon Thomson

“One of the biggest problems I see is, there’s 32 local authorities in Scotland, but maybe only three or four where you have something you could call a food hub. A lot of areas don’t have what we do. If it was to be more top-down, there needs to be the infrastructure in each area. If you’re somewhere like the Borders or Fife, which doesn’t have anything like my own organisation, this is where maybe government policy could dictate. Do you want government ring-fencing money or setting up national frameworks?

“But it breaks my heart to see areas 10 miles away, where we’re being told there’s a 200 per cent increase in food bank usage and there’s nothing they can do about it.”

In the worst way, the latest Council budget will be business as usual for Motherwell and the other localities affected – there were cuts last year, cuts this year, and there will in all likelihood be more of the same next year. No matter how pro-active the council may be, and in spite of the efforts of committed local third sector programmes, it feels like a losing battle.

“We’re doing everything we can from our side of things to mitigate and limit, but there’s not enough,” Thomson concludes. “As long as those cuts continue, there will be less and less prevention being done in those communities, and it will lead to more and more sticking plasters. In essence, we need more money, channelled in the right way, to prevent future inequalities. At the moment, it’s a finger in a dyke.”