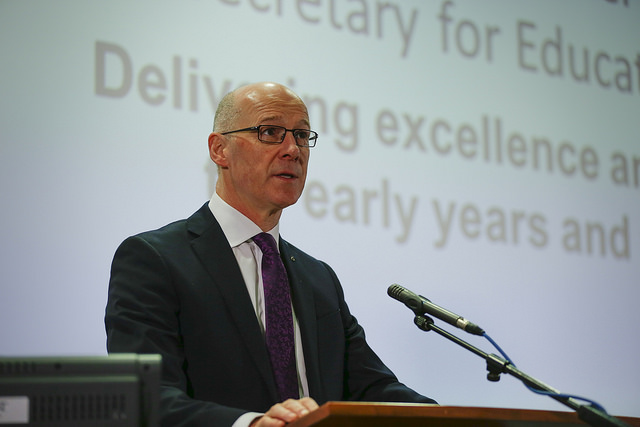 No more ‘arms sales’ during lessons in South Lanarkshire

Scottish Green party education spokesperson Ross Greer MSP wrote to Swinney, who is also deputy first minister, and Education Scotland (ES) in May after being alerted to lessons that saw S2- S4 pupils compete in a dragon’s den-type scenario to sell weapons.

The 14-16 year olds were asked to focus on World War One (WWO) and choose a weapon to sell to the “dragons.”

“A lesson plan based on children role-playing arms dealers and whose educational benefits were wafer-thin at best, is indeed inappropriate.” Ross Greer MSP

Greer said: “It shouldn’t really have taken this long but I’m glad that Education Scotland and the cabinet secretary now agree with me that a lesson plan based on children role-playing arms dealers and whose educational benefits were wafer-thin at best, is indeed inappropriate.”

However, a comment from the head of education in South Lanarkshire, Tony McDade, that the lessons were “popular with teachers and pupils” still troubled Greer.

He said: “I’m obviously still concerned by comments made by one local council that the lesson plan had proven popular in their area.”

Scotland’s youngest ever MSP Greer told CommonSpace that “political interference” should be avoided and teachers judgement should be sufficient, but felt he had to spark the debate after receiving complaints from constituents.

He said: “Beyond this singular lesson plan, which was not produced by Education Scotland and is hosted on an external website, I hope we’ve opened up a debate about the normalisation of militarism in our schools and the need to reverse that.”

In a letter to Greer, Swinney said he had conversed with Education Scotland who informed him the outcomes being used during the controversial lessons were not linked to the Curriculum for Excellence. 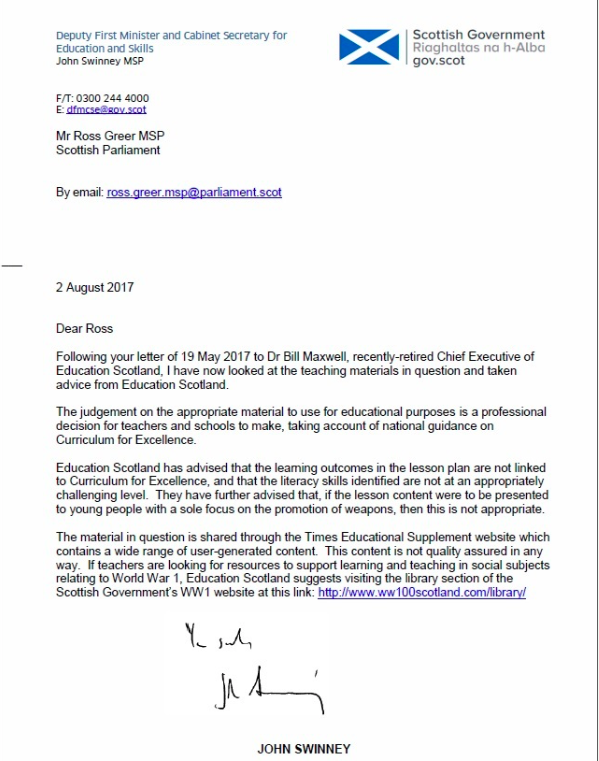 Within his response to Greer the deputy first minister said: “They (ES) have further advised that, if the lesson content were to be presented to young people with a sole focus on the promotion of weapons, then this is not appropriate.”

CommonSpace asked if any disciplinary action had been taken in regards to the lessons.

A spokesperson for ES said: “It is not the role of ES to take disciplinary action. This is the role of the head teacher and the local authority involved where appropriate.”

South Lanarkshire executive director of education resources, Tony McDaid, said: “We will examine the advice from Education Scotland and take the appropriate action.”

A Scottish Government spokesman said: “It is the responsibility of teachers to decide what to teach in their classrooms – in line with Curriculum for Excellence. This particular lesson material was accessed through a third party website and is neither endorsed nor supported by the Scottish Government or Education Scotland.

“This government is ensuring that thousands of children across Scotland learn about the impact WWI had on their communities and the wider world, by making teaching resources available through Education Scotland, organising education events, and providing £100,000 funding to allow schools to visit WWI battlefields, through Historic Environment Scotland.

“This is part of a number of programmes we have in place to commemorate the sacrifice made by the people of Scotland and ensure it is never forgotten nor taken for granted.”