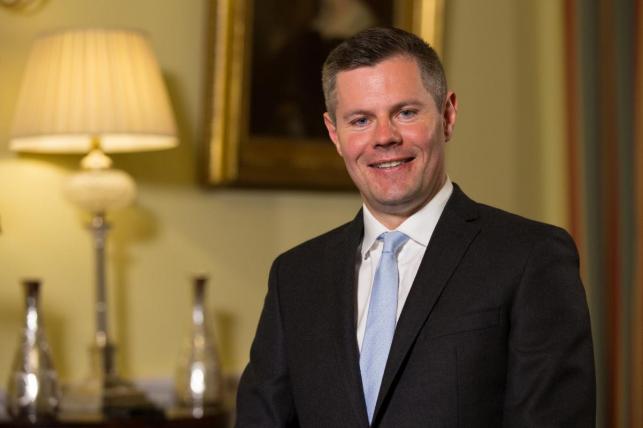 AS the Scottish Parliament passed legislation today [21 January] formally establishing in law a Scottish National Investment Bank (SNIB), MSPs clashed over what conditions should be met by companies seeking support from the new bank.

Expected to be operational by the end of 2020, the SNIB is intended to pursue long-term investments in Scotland, with a Scottish Government commitment of £2 billion in funding for the bank over the coming decade.

Labour MSP Neil Findlay led demands for changes to the Scottish National Investment Bank Bill which would ensure firms supported by the bank would promote living wage pay, rights to unionisation and compliance with the tax regime, among other amendments.

During exchanges over an amendment which had been withdrawn by Scottish Labour business spokesperson Jackie Baille, Findlay protested that the Scottish Government did “have the power” to reinforce the SNIB’s capacity to protect workers rights, but would not use it.

Speaking to his own amendments – which would see the SNIB refuse to invest in firms engaged in tax avoidance or evasion, that fail to pay the living wage, that employ workers in precarious contracts, that use payroll and umbrella companies or which refuse to recognise trade unions – Findlay pressed the argument.

He continued: “The government often talks about its lack of power to imbed its fair work agenda in legislation. Well today we do have that power.”

“Jackie Baillie has said she would withdraw the amendment if I’d be happy to work with her and the STUC, and I categorically agree that I will.”

Responding to Findlay’s motions, Makcay repeated that the Labour MSP had not been constructive in his approach, and sought not to promote progressive policy through the SNIB, but rather “promote himself”.

He further claimed that Findlay’s amendments would lead to “unintended consequences”, including the prevention of management buyouts that could “save jobs”.

The amendments were also opposed by the Scottish Conservative group on the grounds that they would undermine businesses that did not meet standards on workers pay and conditions, and on their tax record.

“We have a number of difficulties with these amendments.

“Indeed, investment from the bank may be the very change that enables these companies to achieve these objectives. In all those cases small companies would be penalised if they cant access funding from the bank.”

Baille withdrew an amendment on the agreement to continued joint work with the Scottish Government and Scottish Trade Union Congress (STUC) to ensure the bank served the needs of workers. It was then moved by Scottish Liberal Democrat MSP Mike Rumbles, but fell nevertheless.

“They don’t even bother to hide it.”

“Trade unions have long argued that the short-term approach at the heart of the financial system has hampered innovation and promoted low skill, low pay business models across the Scottish economy.  It is welcome that the Scottish National Investment Bank has been set up to tackle this problem, to support patient capital, encourage innovation and long-term investment and has a clear focus on supporting a just transition and delivering on Fair Work objectives.

“The Bank must genuinely pursue an effective Fair Work strategy that raises the quality of work across Scotland, increases collective bargaining coverage and creates a high standard of living for all workers.” STUC General Secretary Grahame Smith

“The STUC has worked hard to influence the legislation and we welcome the commitment that the Bank will only invest in companies that promote Fair Work and pay the living wage. The challenge is now to ensure that this commitment has teeth. The Bank must genuinely pursue an effective Fair Work strategy that raises the quality of work across Scotland, increases collective bargaining coverage and creates a high standard of living for all workers. It must also only support employers with business models based on progressive employment practices that avoid the use of zero hour contracts, bogus self-employment or umbrella contracts.

“However, there are still some questions around the governance of the bank and a more explicit role for unions would have better supported the banks Fair Work aims. Unions will also continue to push for the Bank’s employees to have the same terms of employment as civil and public servants in other public bodies.

“The Bank represents a positive step forward and an opportunity to pursue better economic development models in Scotland.”

Scottish Labour MSP Claudia Beamish received support for her amendment which she said “expands” on the bill’s commitment to “promote environmental wellbeing by highlighting the notion of bio-diversity as a particular aspect”. She said in this regard the SNIB could learn from institutions including the European investment bank.

Following today’s vote, Friends of the Earth Scotland divestment campaigner Ric Lander also commented: “Because of the hard work by climate activists the Scottish National Investment Bank must now invest in climate solutions and maintain ethical standards across its activities. This is a huge achievement. We can now say that the creation of this Bank is good news in the fight against the climate crisis.

“Our new public bank should be shaping our economy for the future, turning away from a business-as-usual approach prioritising people and planet in the shift to a zero-carbon economy.” Friends of the Earth Scotland divestment campaigner Ric Lander

“With its legal obligations to tackle the climate crisis, the Scottish Government should now clarify that this new public bank will not invest in any fossil fuels, plastic production, deforestation or other projects that will push up our climate emissions.

“Our new public bank should be shaping our economy for the future, turning away from a business-as-usual approach prioritising people and planet in the shift to a zero-carbon economy.

“With its objective to target finance towards a Just Transition this Bank should be tackling fuel poverty, creating new renewables supply chain jobs, decarbonising our heating and financing zero carbon transport.

“Now that the Bill to create the Scottish National Investment Bank has passed Parliament, it urgently needs to get going in providing finance that can help us realise a Just Transition to a fossil free economy.”

A cloud had been cast over the future of the SNIB in 2019, when the UK Government refused Scottish Government requests to have the right to carry funds between financial years, something necessary for the effective financing of a bank. However, Mackay insisted he would continue on with plans for the institution, which is intended to provide the financial support for green industrial development.