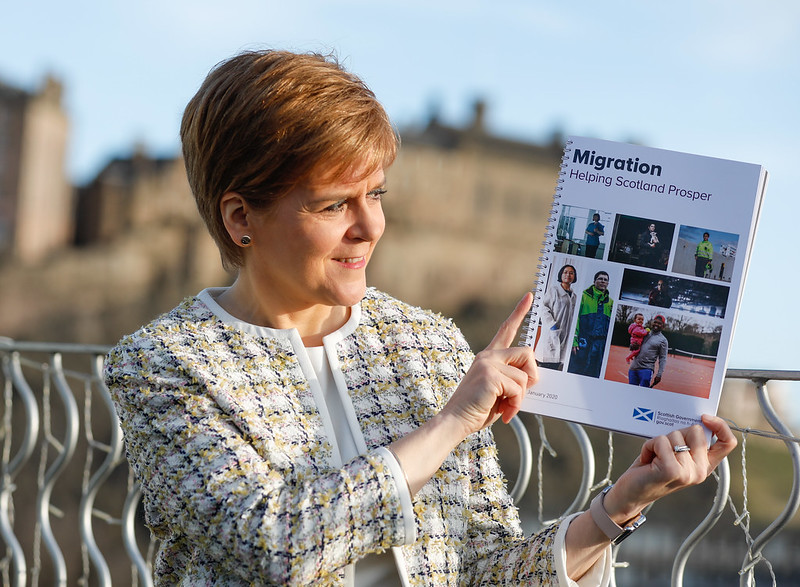 THE UK GOVERNMENT’S “knee-jerk” rejection of proposals for a tailored visa system for Scotland designed to boost immigration has been criticised by MSPs and a Scottish Government minister.

Hyslop argued the current immigration system set by the UK Government was not meeting the needs of Scotland, which has “distinct” demographic and geographical needs.

Pointing to “successful” regional migration schemes implemented in nations such as Canada, Hyslop said such schemes had been used to attract and retain people with the skills needed to benefit local communities.

Hyslop said: “Our proposals for a tailored migration policy are supported by local authorities, employers and universities across Scotland. The UK Government should engage positively and work with us to develop a system which meets our distinct needs.”

SNP MSP Stewart Stevenson highlighted the potential relevance of a Scottish visa system to the fish processing industry in North East Scotland, where he said some 70 per cent of people employed by the industry are non-UK nationals.

Hyslop said the proposals were designed to be “inherently flexible” to meet Scotland’s labour needs.

Scottish Labour MSP Claire Baker said that, whilst she believes immigration should be reserved, she welcomed the report and was “disappointed” in the UK Government’s response.

Baker said: “I believe there is room for flexibility that is workable within the current system.”

Hyslop told Baker she is keen for cross-party engagement on the issue, adding that the UK Government’s response was “knee-jerk” and regrettable.

“This is a proposal that is very practicable. So we will persist. The more support we have from other parties, and debates and motions in this chamber, I think we can try and engage the UK Government,” Hyslop told MSPs.

Under one model proposed by the paper, the Scottish Government, while accountable to Holyrood, would define criteria for a new visa and assess applicants.

The UK Government could then conduct the relevant security checks before deciding to issue a visa.

The proposals, designed to work under the devolution framework, could be adapted in future should Scotland become independent.

The Scottish Government say such a system is “important and urgent” due to the make-up and projections for Scotland’s population, with any growth over the next 25 years expected to come from migration alone.

Speaking in Edinburgh, Nicola Sturgeon said increased immigration would be needed to tackle a decline in the working-age population: “Migration to Scotland supports economic growth and the delivery of public services and helps to address the serious issue of long term demographic change – as well as enhancing and our communities.

“Yet the latest proposals from the UK Government to control immigration and end freedom of movement would be disastrous for our economy and society and would risk acute labour shortages.

“Devolving immigration powers by introducing a Scottish Visa would allow Scotland to attract and retain people with the skills and attributes we need for our communities and economy to flourish.”

Responding quickly after the report was released, the Home Office asserted that immigration would remain a reserved issue.

Ex-Tory MP Stephen Kerr, who lost his seat in last year’s General Election, was the first to break ranks with his party, saying Westminster should work with Sturgeon’s government on plans for a post-Brexit Scottish visa.

The Times newspaper reported that the former Stirling MP said the plans were “really something worth looking at”.

Kerr said: “I think the people of Scotland are fed up with its two governments shouting each other out.”

Both the UK and Scottish Governments have been at loggerheads since Boris Johnson took office, with the prime minister refusing to entertain a request from Edinburgh for a second referendum.

The Tories response to proposals on a new immigration system could be helpful for the SNP, according to one party source who spoke to CommonSpace: “The Scottish Government have set out a detailed, sensible proposal which makes sense for Scotland. Within minutes it was flatly rejected by Boris Johnson.

“The Scottish people will surely see that and question what kind of future they will have in the Union if a Westminster government they do not elect refuses to listen.”