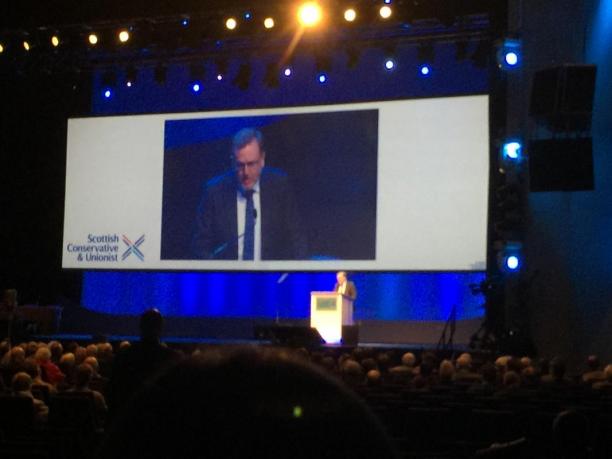 THE SCOTTISH SECRETARY has claimed that his government has “put forward a common sense approach for leaving the EU”.

David Mundell told the Conservative party conference in Manchester on Monday [2 October] that both the Scottish and UK governments need to work together to be “Brexit-ready”, despite fears in Scotland of a Westminster powergrab on devolved powers after Brexit.

Mundell said: “We know businesses and individuals need certainty and stability. Our laws, rules and regulations must function on the day after Brexit just as they do now.

READ MORE from the Conservative party conference: The UK has become too ‘London-centric’, admits Ruth Davidson

“We will need common frameworks – just as we have now – to protect our vitally important UK internal market. But we will also add to Holyrood’s responsibilities, as decision-making powers return from Brussels.

“That’s what our approach will deliver – and I urge the Scottish Government to continue to work with us on these issues. Now is not the time for conjuring constitutional grievances.

“We have to work together, Scotland’s two governments, on getting Scotland Brexit-ready.” David Mundell

“Now is the time for working together, constructively, as the people of Scotland expect from their two governments.”

Mundell added that it is time for the Scottish Government to “lift their eyes above and beyond the Brexit process and consider future opportunities”.

Highlighting trips to both Paraguay and Argentina last week where he was meeting oil executives, Mundell told the SNP that “for the good of the country we both govern – enough of the point scoring”.

Mundell added: “We have to work together, Scotland’s two governments, on getting Scotland Brexit-ready.”

“We have a sitting duck prime minister who has no control of her own government and a cabinet pulling itself apart from that even the writers for EastEnders couldn’t make up.” Alistair Carmichael

CommonSpace understands that Mundell wants the Scottish Government to “focus on process, but not on outcome”.

Mundell told CommonSpace that there has been “substantial progress in recent weeks” with powers that coming back from Brussels and the framework of the UK.

As far as CommonSpace understands, Mundell wants to move on to focusing on the issues that will affect Scotland in post-Brexit, including trade and commerce.

Last month, the Scottish and Welsh governments both penned a letter to Prime Minister Theresa May outlining concerns about a post-Brexit Westminster powergrab. It’s feared that powers currently subject to EU agreements but which would otherwise be devolved to the Scottish Parliament, will instead be taken over by the UK Government following Brexit.

Scottish Liberal Democrat Deputy Leader Alistair Carmichael said: “If David Mundell seriously thinks that his party is putting forward a common sense approach to Brexit then he has clearly been living under a rock and missing those Jeremy Kyle style counselling sessions that have been happening within the cabinet.

“David Mundell continually stressed the need to work together – but he has failed to openly engage with devolved administrations on Brexit for the past eight months.” Lesley Laird

“Aside from the fact that Brexit itself is nonsensical, the Tories approach to Brexit has been anything but common sense. We have a sitting duck prime minister who has no control of her own government and a cabinet pulling itself apart from that even the writers for EastEnders couldn’t make up.

“Liberal Democrats are the only party that are putting forward a clear approach. Giving the British people a final say is the common sense approach and will give them a chance to vote on the reality and not what bumbles in around Boris Johnson’s head.”

Shadow Scottish secretary Lesley Laird said: “David Mundell has offered nothing new to the people of Scotland or the UK.

“But we will also add to Holyrood’s responsibilities, as decision-making powers return from Brussels.” David Mundell

“On Brexit, David Mundell offered nothing but platitudes where we need clear ideas and commitments.

“David Mundell continually stressed the need to work together – but he has failed to openly engage with devolved administrations on Brexit for the past eight months. Labour is the only party offering constructive and grown-up politics on Brexit, and that’s why Theresa May has now accepted the need for transitional arrangements.

“It is increasingly clear that David Mundell is a member of a government that is out of ideas and running out of time.”