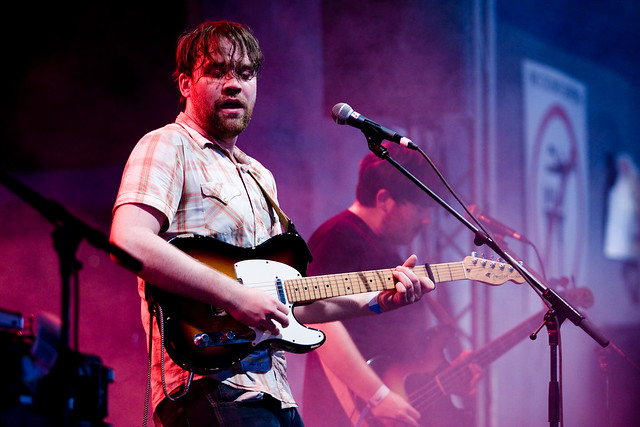 SCOTT HUTCHISON, the songwriter and creative force behind Frightened Rabbit, took his own life in May 2018, but the band are keen that their new ‘Tiny Changes’ album of covers of their seminal Midnight Organ Fight album should not simply be seen as a commemorative tribute to a life cut short, but as a vibrant celebration of the achievements of the man and the band and in particular an album which means so much to so many.

The NME review of Midnight Organ Fight from 2008 succinctly summarises it as “bleak but also utterly beautiful, scathingly honest, darkly hilarious and impossibly grandiose” which is a pretty accurate description not just of that album but their entire body of work.

Scott was the driving force behind the covers album, originally scheduled to celebrate the tenth anniversary of Midnight Organ Fight last year. He chose the artists from their large pool of friends and former touring companions, and it amply demonstrates the impact Frightened Rabbit had on a global scale, crossing boundaries both musically and geographically, a great Scottish export.

“A master of hilarious melancholy” states one of the press blurbs on the cover of my copy of William McIlvanney’s ‘Weekend’. It occurs to me that these two words are such an apt description of Scott Hutchison, illustrating how he stands in a Scottish cultural tradition while transcending the parochial.

People had sung in Scottish accents before but not with quite the same powerful burly brogue and certainly not with the same candour. A marriage of particularly Scottish, foul-mouthed iconoclastic, belligerent lyrical themes with muscular but tender rock sensibility. Personal but highly relatable in the themes of alcohol-fuelled blackouts, rueful drunken fumblings, family feuds, battles with self-loathing, all rooted in Scott’s personal experience but striking a highly individual, distinctive note with the listener too. As Scott said in one of his last interviews in March 2018: “I don’t question anyone’s interpretation or how they use the song. It is not mine. It doesn’t belong to me after it’s out.”

There was countless articles, reminiscences and social media posts in the wake of his death that outlined all the ways in which the music helped people. It’s a very unusual band and a very rare talent that can reach the level of success that Frightened Rabbit did and still feel so acutely personal to each listener.

“Scott [Hutchison] was the driving force behind the covers album, originally scheduled to celebrate the tenth anniversary of Midnight Organ Fight last year.”

Ben Gibbard, frontman of Death Cab For Cutie, spoke of having an “epiphany moment” when first hearing Frightened Rabbit: “The Midnight Organ Fight kind of came into my sphere at a pivotal time for me when I was going through a difficult time in my life. I felt similarly about that record and that band than I did when I first heard The Cure”.

The booklet which comes with the ‘Tiny Changes’ album illustrates beautifully the importance of Scott and his music as the contributors provide anecdotes from swapping early demos with the Twilight Sad in a Glasgow bedsit to hanging out with Sarah Silverman in Los Angeles.

The presence of Gibbard, Aaron Dresner of the National and the Hold Steady’s Craig Finn on ‘Tiny Changes’ is a reminder that, despite the very Scottish flavour they fit just as comfortably alongside the reflective, brooding majesty of National and the raucous confessionals of Hold Steady as much as fellow Scots and it was this that saw them tour in support of these kindred spirits and rise through the ranks.

Josh Ritter’s hoedown of ‘Old Old Fashioned’ and Daughter’s electronica of ‘Poke’ show just how easily the Scott Hutchison songbook can be adapted so comfortably across genres as only the greatest songwriters can be.

It’s impossible not to see it through the dark prism of Scott Hutchison’s passing, especially the prophetic “Floating in the Forth” in which Scott articulates his contemplation of suicide. Twilight Sad cover the song and James Graham sings the final line “I think I’ll save suicide for another year” as a repeated refrain which would sound optimistic if not for the end that we now know awaited the writer of the lyric.

In ‘Head Rolls Off’ Craig Finn repeats the line that has become Scott’s epitaph as well as the name of the charity setup in his memory. ‘I’ll make tiny changes to earth’ is halfway between a personal mantra and an evangelising preacher to the congregation.

“Many of the songs on Midnight Organ Fight are uplifting and genuinely life-affirming in a way that a song deliberately written to be uplifting couldn’t be.”

It’s sentiment that has become the Frightened Rabbit legacy: making tiny changes on such a repeated frequency and on such a scale as to become hugely significant. This is the recipe behind the music too. Making small stories significant. Making the seemingly mundane compelling. Capturing the transitory drunken euphoria of an average night out. That passing moment of alcohol fuelled delirium stretched out to a three minute indie rock anthem. Preserved forever and we the listener never have to suffer the hangover, we’re perennially in a state of near euphoria each time we listen.

Many of the songs on Midnight Organ Fight are uplifting and genuinely life-affirming in a way that a song deliberately written to be uplifting couldn’t be. These are not trite and facile denials of feelings, the polar opposite of some million-selling happy-clapping pop confection but a celebration, nonetheless. A sign that yes, this misery was reality but the darkness could be beaten. Not the kind of music that says ‘cheer up it might never happen’ but the kind of music that says ‘it is happening but fuck it’.

Julien Baker underlines this point in writing about her take on ‘The Modern Leper’: “It’s a love anthem, bypassing platitudes, a reminder that confronting the difficult and the ugly is necessary for healing”

The soul-saving importance, empathy and catharsis of Frightened Rabbit was most evident when they played live. No matter the venue size it was an emotional sweatbox, the ebullience of the music, contrasted candour of the lyrics, creating a crowd and band huddled together arms around one another in mutual support.

This communal encouragement to be more open emotionally is one of Scott Hutchison’s most important bequests to us. In that final NME interview two months before his death he said: “I hate the idea that opening up is in any way emasculating. Even if it fucking is, who cares? Now is the time for men to be as gentle and open and emotionally fluent as they can be. I think this is the thing that happens to a lot of guys being influenced by Frightened Rabbit. By ‘influenced’, I mean driven to opening up. It’s put in a certain way that they can associate without feeling like somehow they’re being weak. You know, there’s definitely admittance in these songs, but there’s not always weakness. Even if there is, there’s a certain sense of self that they can associate with. It’s important to have a place to put your thoughts that you can’t quite express yourself. I’m all for making that kind of music, not just for men, for anyone who wants to find a way to, you know, let go.”

As Grant Hutchison has observed, even Frightened Rabbit’s physical appearance made a statement about what being a man entails. As Midnight Organ Fight came out there was a preponderance of Art school bands who were lean, angular, stylish and cool with music to match. The Frabbits were “the overweight hairy guys coming in like ‘You don’t need to look attractive!’”. They took internet insult as and turned it into a T shirt emblazoned with the legend ‘Furry Brick Built Men: Ugly, Hairy and built like a cruise ship since 2004” and donated the proceeds to an anti-bullying charity, showing us an exemplary way to deal with trolls.

The blackness of the humour for him wasn’t a saviour in the same way as it was for us as the listener. It’s tragic that his own personal darkness swallowed Scott Hutchison but it can’t extinguish the light he left to show the rest of us the way out of our darkness. His modest vow in song was to make ‘tiny changes’, but his achievement in life exceeded this immeasurably.

‘Tiny Changes: A Celebration of Frightened Rabbit’s The Midnight Organ Fight’ can be downloaded or streamed here.