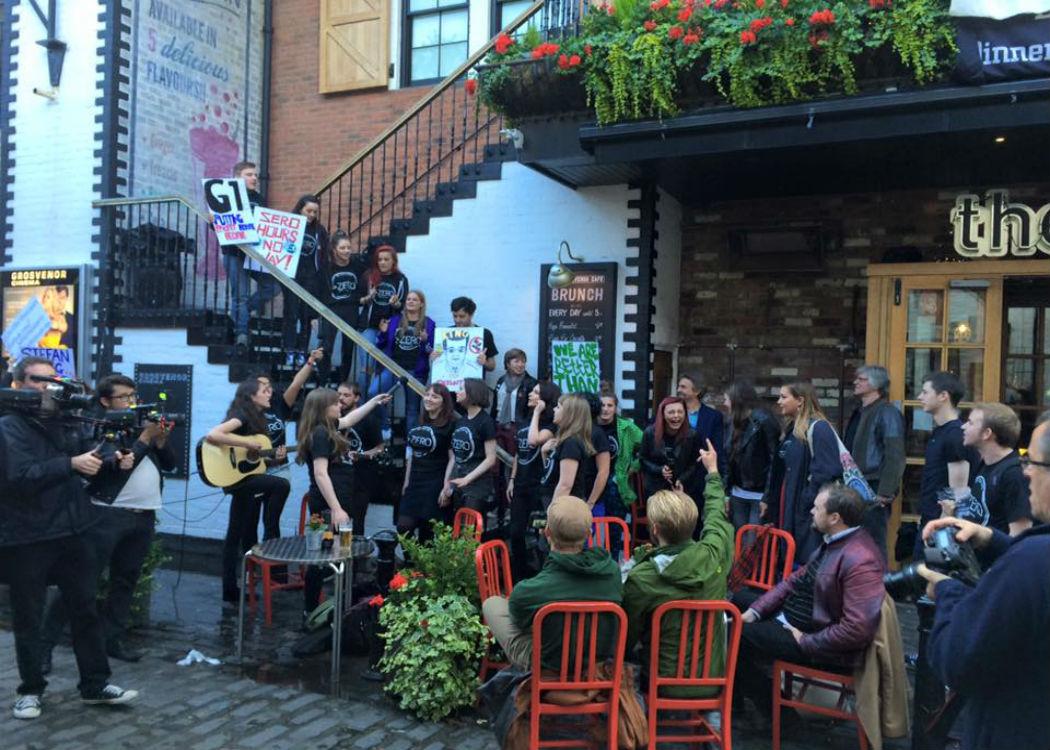 THE Better than Zero campaign has ramped up its activities with a flashmob protest outside an Ashton Lane venue.

Young trade unionists danced and sang outside The Loft in Ashton as part of a protest against what they said was the “abusive” employer G1, which uses zero hours contracts.

A young trade union choir sang “I need a dollar” and other themed hits as around 30 activists dropped banners and held placards attacking G1 group head Stefan King and distributed leaflets calling for an end to zero hours contracts.

Campaigners told CommonSpace they had held a consultation about pay and work practises with G1 employees and that the stories they heard prompted them to hold the falshmob protest against a G1-owned business in the fashionable west end lane.

“What most excites me about the anti zero hours campaign is people who understand the value of traditional trade unionism combined with creative action,” he said.

Sarah Wiktorski, a 29-year-old activist who worked as a sound engineer for the stunt told CommonSpace that G1 was a prime target: “Stefan King, head of G1 group, has a personal fortune of PS45m.

“They have been fined for not paying thousands of their staff a minimum wage let alone a living wage,” she added.

“The trade union movement across the world is changing and evolving, Look at the fast food workers strikes in America.”

Andrew MacNeil 23, a trade unionist who played banjo in the choir, said: “Historically trade unioists are the only reason we got rights.”

G1 Group is one of Scotland’s largest service sector employers, owning more than 45 venues mainly in Glasgow and Edinburgh. In March 2015 G1 was found to have underpaid almost 3,000 employees by around PS45,000.