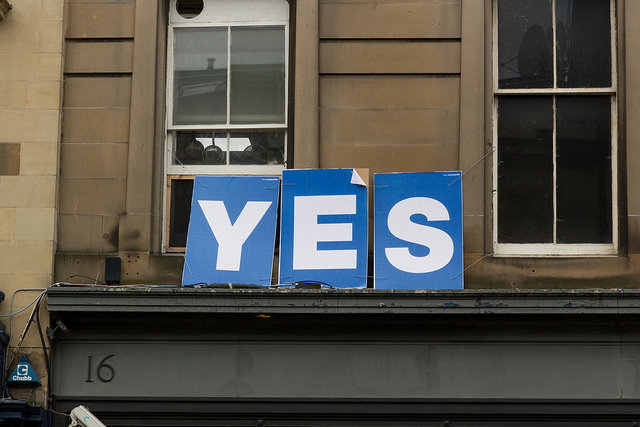 Ashley Graczyk, independent councillor for the Sighthill/Gorgie ward in Edinburgh who left the Scottish Conservatives a few months ago, has revealed on Twitter her journey from No to Yes, saying the UK Government’s treatment of disabled people and her growing belief in self-governance had led to her changing view. CommonSpace re-publishes her statement in full below

OVER a period of a year as a Scottish Conservative Councillor there were three things that had radically transformed my political views from No to Yes. The first is the impact of Conservative policies on people and communities. As a new Councillor, I saw with my own eyes the impact the Conservative policies, especially DWP and welfare, had on the local people and communities. I have lost count of the amount of times I have met with various disabled people and those in difficulties who have been immensely impacted by the DWP at a local level. I, personally, have seen people reduced to tears because of Universal Credit, PIP, Access to Work and the Access to Elected Office Fund (UK).

I also speak from personal experience that the Access to Work application and assessment process is far too bureaucratic, obstructive and is no longer fit for purpose. Quite frankly, it is a horrible process and many charities have the same concerns.

The final straw was when I received an email from a team member of the Government Equalities Office in response to my open letter to the Minister for Women and Equalities. I had shared my delight in the Access to Elected Office Fund (UK) being reinstated for a year and urged the Minister to make it permanent. I also shared briefly how grateful I was for the support I received from the Access to Elected Office Fund *Scotland) and the positive impact it had on my campaign.

The UK Government acknowledged there are certain barriers, but they also stated that the Access to Elected Office (UK) was being wound up and that the political parties are expected to have ultimate responsibility to meet extra costs for disabled candidates. I’m concerned the UK Government wants to shift the responsibility of costly unreasonable adjustments to political parties, like they do to employers with Access to Work, and like some employers, some political parties would not have a sustainable budget to meet the costly support needed. This would put a cap on disabled peoples ambitions to get into public and political life and certain types of work from anywhere in the UK.

READ MORE – Colette Walker: What has to change to get more women into politics

The second reason is the UK Government itself. In June 2017, I witnessed a snap General election with an unlevel playing field and a clear disadvantage for disabled candidates, thanks to the UK Government’s decision to not release the Access to Elected Office Fund (UK).

I witnessed disabled people throughout the UK who would have loved but were unable to stand as MP candidates, including Scottish candidates, as they could not afford the support needed thanks to the Access to Elected Office Fund UK being reserved (had it been devolved it is likely the Scottish candidates would have had received funding from the Scottish Government). Some of the political parties did not have the sustainable budget to provide nor had the time to fundraise for a snap election. Those that did manage, had to pay extra on top of the campaign itself. This example made me wonder if the same could potentially happen to the Access to Elected Office Fund (Scotland) if the Scottish Conservatives ever got elected into the Scottish Government. All this demonstrates what life is like for disabled people under the current UK Government.

It also made me wonder, what kind of society do I want to live in – a society under a selfish government that looks for any excuse to not support disabled or vulnerable people and favours the rich? Or a society where together, we can work for the removal of barriers to people’s economic, social and civic inclusion, and to promote our rights, choices and voices, as full and equal citizens?

I decided to resign from the party because I refused to give up our right to participate in work, politics and in society on an equal level playing field under the current UK Government that wants to remove or alter policies that puts a cap on our ambitions.

The third reason is my belief in self-governance.

Along with all the other City of Edinburgh Councillors, we have the privilege to govern the Capital City of Scotland, and in my first year as a Councillor I saw with my own eyes how we run our City via the Council. We also received some insight into the various roles MSPs and MPs have due to working cross-government on various issues. Over time, it became more glaringly obvious to me the absurdity of reserved matters being dealt with by Westminster and not by the Scottish Government (bear in mind I voted No), as Scotland is capable of governing on reserved matters too. I became more convinced that Scotland needs political independence to build a different and better Scotland.

I have been brought up with the UK as my Country, and all my life I had seen the whole of the UK as my homeland. I don’t want to see new borders as I’m about finding new and practical ways to break down barriers and unite people as central to one of my progressive values.

But I came to the realisation that to preserve and protect the values we have in Scotland we cannot have policies imposed on us from Westminster that jar with the kind of Scotland we are trying to build. So simply, we need independence. Scotland’s traditional liberal values of freedom, tolerance, equality, and individual rights need to be protected. It was a question of which values were more important to me to serve in my ward, after all I campaigned under the vision of ‘Communities that Work for Everyone’ and I believe the Conservatives and UK Government cannot deliver that aspiration.

READ MORE – Independence for women: National conference to amplify women’s voices in politics and beyond

What I personally struggled to come to terms with, was that for Scotland to get political independence we need to break up my homeland. We need to break up the old Union which does not work with devolution and work together as a new Union of Independent Nations as Equals cooperating with our UK neighbours on an equal footing while the Scottish people control their own destiny.

I believe it is time for Scotland to have political independence, to self-govern with the full freedom to build and shape Scotland’s future by our own hands the kind of country we want it to be and the kind of Government we want to have (one with a caring heart!).

Yes, I freely admit we need to find new and practical solutions such as, the kind of currency we will have, the kind of central bank, and so on, but we can work, discuss, debate and share ideas together to find these solutions and build on the vision of an independent Scotland into reality. Heck, if we can invent televisions, telephones, penicillin and insulin, to name a few – surely, we can create ways to self-govern our Country? Didn’t these inventions all start with a vision from those who could imagine a different future?

The increasingly safe and sensible choice seems to be for Scotland to stay at the heart of Europe, independent and in control of our own destiny. It is time to embrace YES with full confidence in our future.