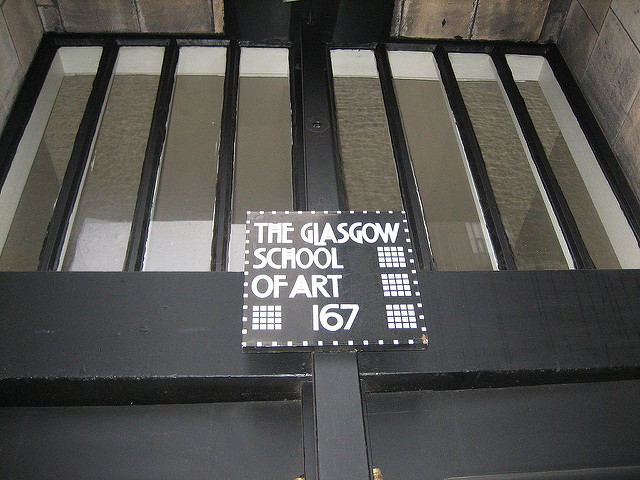 Lorna Miller, CommonSpace artist-in-residence and former student at the Glasgow School of Art, gives her memories of the world famous institution, which has been rocked by a second fire in the past four years on Friday [15 June] which may have damaged the building beyond repair

IT JUST wasn’t the same.

When I came back from England, the new building was towering over the Mackintosh, totally dwarfing it. I remember the Mac being much more majestic and solid. The shiny new build made it look like a shrunken geriatric. If I were Charles Rennie Mackintosh I’d be raging.

The five-storey high Reid building was completed in 2014, the same year as the first shocking Mackintosh fire. This year is the 150th anniversary of the birth of Charles Rennie Mackintosh. The building, considered to be his masterpiece, has now been cursed with two terrible fires both around the time of the student degree shows. The impact of this on students, staff and all who love the place as I do will be devastating. I’m only glad it never happened during my time there because I think it would have pushed me over the edge.

When I visited in 2013 after more than 20 years’ absence, the social heart had gone from the street I once knew and not just because I didn’t recognise anyone. We used to sit on the steps outside the old Foulis Building across the road looking up at the Mackintosh on sunny days, or with glasses of wine when there was an opening, people mingling between the gallery space and the Vic bar. Now it’s all impenetrable glass and security guards. It felt like a place that belonged to the students. The campus was a little bit grubby but couldn’t afford an upgrade: like us. If we ever had a bit of spare cash we would run down to the charity shops on Sauchiehall Street and come back ready for the catwalk; we had licence to be unique and were expected to dress bizarrely, some were more extravagant than others. I hope the photo of me wearing multi coloured, striped leggings with a granny square crochet waistcoat (I made myself) over a scratchy Eurasia Crafts Indian top has been incinerated.

We felt at home and we felt pride working in the Mac’s high ceiling studios with the distinctive ​Art Nouveau clocks guiding us through the day. I often stumbled into tour parties being ushered past classical sculptures in the narrow corridors, thinking to myself, ‘Yes, I’m a genuine GSA paint-splattered student’. I was all puffed up with pride: being one of the chosen ones. And when I realised tourists were more interested in the wood and stone I moaned, to nobody in particular, how hellish it was being a student getting lumbered with a student loan debt. People came from all over the world to see the building we regularly smoked fags in while soaked in turps and oil paint. 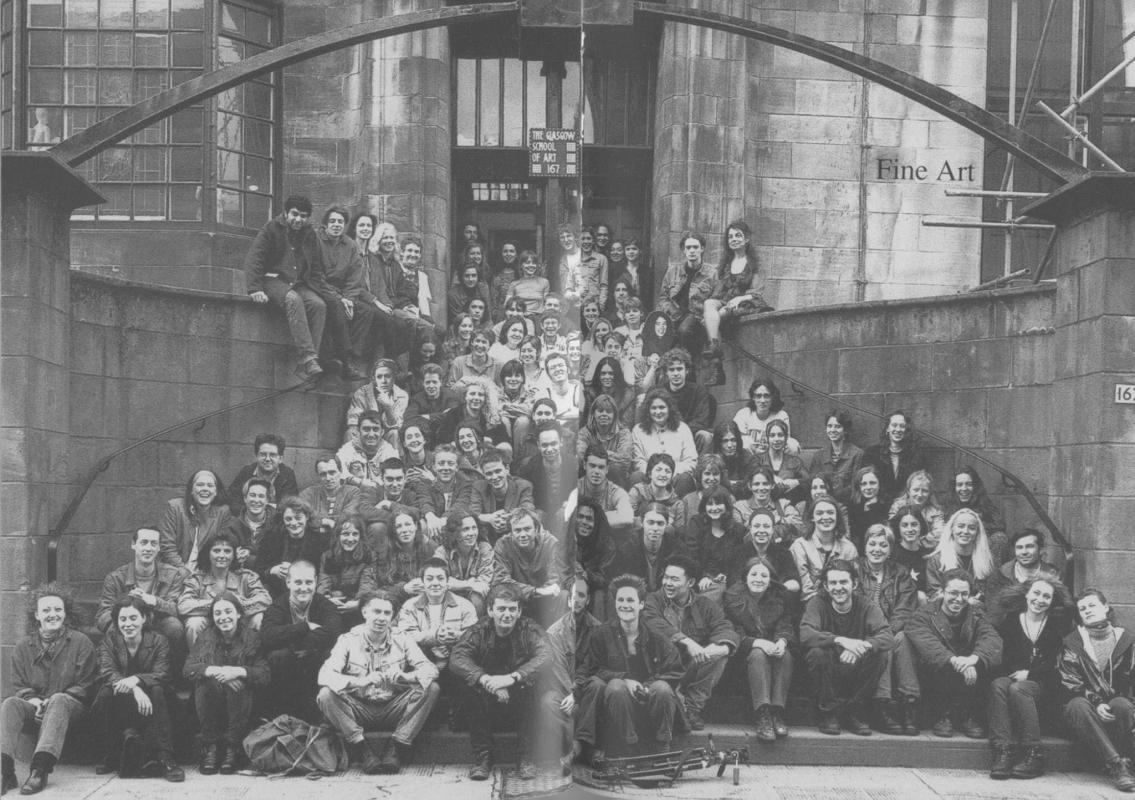 Artist Jo Logan was shocked to discover her friend Rhona’s husband was the famous art school alumni Robbie Coltrane. Rhona had always called him Robin so Jo got a shock when she was introduced to him after his baby had been trying to chew on her oil paint stained fingers. Jo also remembers running around with former students Nancy Jack and Jill McNally Ash trying to catch a glimpse of Brad Pitt when he visited.

The reputations of the many creatives who have passed through have travelled as far as Mackintosh himself. Fran Healy of Travis was my first boyfriend at art school. We didn’t go out for long and then he chucked me. My Witch comics, that have sold worldwide, are full of people and stories from my time at art school mixed up with my own life experiences. I was warned against the dangers of ‘slipping into cartoon art’ by Sandy Moffat during one of the regular critiques.

There was still a set of ideas about good and bad art and quite a surprising level of subtle sexism in the 90s that I spent a lot of my energy battling. It fuelled the next 25 years. Straight after I graduated I started self-publishing my comics and had some work published in arts magazine Variant. I was sacked when they became concerned that my work would negatively affect their Scottish Arts Council funding. It’s a fictitious comic strip based on the truth of my experience at that time. No identification with actual persons (living or deceased), places, buildings, and products is intended or should be inferred. Many years later they lost the funding and the magazine folded. Definitely wasn’t my fault. 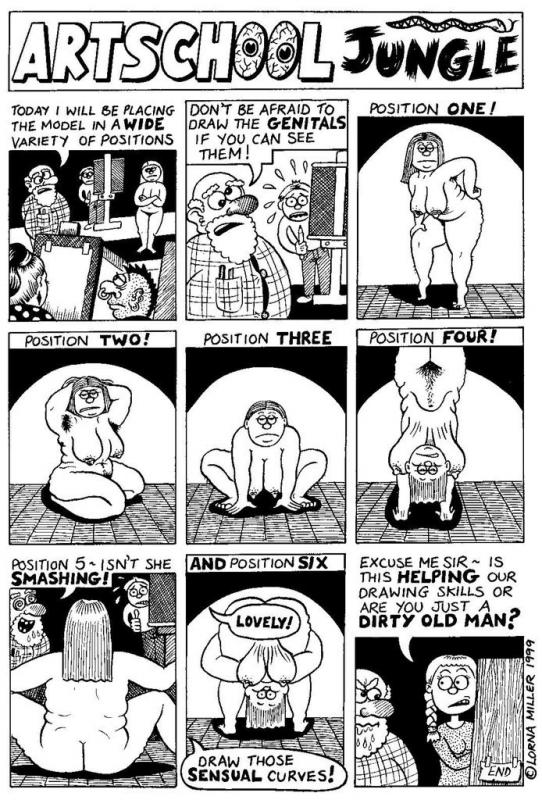 A major exhibition which had a big impact on me when I saw it as a student was Glasgow Girls: Women in Art and Design 1880-1920 organised by Jude Burkhauser. It was incredible to see the volume and standard of work which had largely been forgotten, including work by Mackintosh’s wife Margaret Macdonald and her sister Frances Macdonald. Burkhauser’s highly publicised falling-out with Julian Spalding (then Kelvingrove Museum Chief) by whom she felt thwarted and undermined, led to litigation​. She eventually created her own company to produce the exhibition.

There was an attitude at art school that what was happening in London was the pinnacle of all achievement, even with the amazing legacy of talent that GSA has produced. Half of our tutors were up from London and some of them didn’t behave very well at all.

​My Mackintosh was a building of surprises and mysterious layers; you didn’t know what would be round the next corner. From scary, dark, twisting stairwells to the warm, open churchlike space that was the library; a sacred room of rare antiquities flooded with light that I have never been in. It was a hallowed place I only know from photos. The Mac was a building that bore the daily stomping up and down the steps which became the ritual of those of us lucky enough to work there. We dragged our canvases, art material tool boxes, successes, failures, heartaches and hangovers with us. Artist Margaret Archbold remembers Jack the Janny’s soft, ‘morning pet’ greeting. Many of us were fragile in our own ways but we found strength as a group. Fellow student Sarah Naismith said “we motivated each other and carried each other along, tolerated each other over ups and downs”. It was a family of misfits and a creative mad house. The Mac was the heart and soul of my art school experience. It had already died by the time I returned with more baggage than I had carted away but with a new lightness in my step.

Some things we just have to leave behind us, mourn and move on.