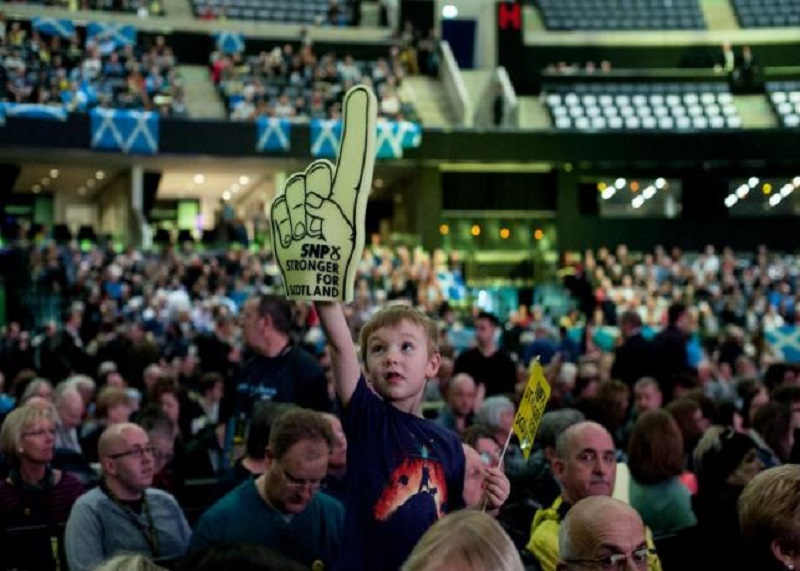 A CANDIDATE to become Nicola Sturgeon’s SNP deputy said his name was on the ballot to give members the chance to vote for a second independence referendum within the next 18 months, claiming the SNP was ready to campaign for independence now.

As part of a series of interviews with the candidates hoping to replace ousted SNP MP Angus Robertson, Inverclyde councillor Christopher McEleny told CommonSpace that his name was on the ballot for a second independence referendum in the next 18 months.

Discussion around the timing and strategy of a future referendum has dominated party discussion about who Robertson’s successor should be.

“I was watching SNP politician after SNP politician rule themselves out of the election this time around,” McEleny said, explaining his choice to stand.

Read More: Deputy leader candidate: SNP should run its own campaign for indyref2

“Approaching the deadline for nominations, I was dissapointed I didn’t see anyone putting themselves forward for the things that I think are important and this is a key role for the party.

“The main issues for me are about communities, making sure we are working for local people, and most importantly timing around the next referendum.”

McEleny, who stood against Robertson for deputy in 2016, said that the last time around he had not expected to win, but had stood in order to shape the narrative of the campaign.

“I believe the time for a second referendum is now, and I wanted to make sure my name was on the ballot paper for the members who, like me, believe that the time frame for that is within the next 18 months.”

The leader of the Inverclyde SNP council group said that decisions around Brexit, and the recent scandal affecting the Windrush generation, showed the sense of absolute urgency for power over the major decisions affecting Scotland to made by Scots.

“In 2014, Yes lost by five percent. I’m convinced that we could now easily convince people who voted No in 2014 that the answer to issues like Trident, the WASPI scandal and the rape clause is Scottish independence.”

McEleny told CommonSpace he thought that a new Yes Campaign should be started right now, so that over the summer the campaign could decide its strategy and message for Scotland: “I’ve always beleived in a bread and roses strategy to winning independence.

“The publication of the growth commission is the perfect opportunity for us to start a campaign now to be made ready during the summer.

“Whether its the NHS, or other things Scots care about, we can say that they will be protected. But we can also say we won’t mirror the UK and we can choose to make different decisions.”

After Nicola Sturgeon released the full report of the Growth Commission, the body commissioned by the SNP to examine an independent Scotland’s economic future, Chris McEleny said it was essential for a consensus on issues like currency to be reached by the movement: “A key aspect of the main arguments that are coming out of the Growth Commission so far is that it sets out a different path for Scotland and moves us away from the failed economic model of the UK which continues to see the gap between the poorest and richest increase, as well as a different approach to the bargain basement economy that Brexit is going to deliver.

“There’s not a one size fits all approach to what independence would look like, but it’s important that we form consensus on issues such as currency.

“The Growth Commission rejects austerity and proposes above-inflation spending increases. That is a much better way of growing our economy, a new independence promise that will build a country based on the ambition to release our full potential.”

McEleny joined the SNP in 2006, and argues that his age should be no barrier because experience shouldn’t equal reward: “I’ve always believed that Scotland should be independent, and during my apprenticeship I seen the beginning of the Iraq war, and saw Scotland dragged into an illegal war that we did not want.

“By 2011, I was active in the trade union movement and I decided that I wanted to get more involved in politics, so I put myself forward to be a SNP council candidate. I was elected, and since then I’ve wanted to make sure that the issues affecting local councils and communities were central to what the SNP spoke about.”

Although Scottish Labour also allows councillors to stand to be deputy leader, a victory for McEleny would make him the only councillor who is the leader of the political party, something he says would be a real advantage for the SNP:  “At a Scottish Government level, we already have a deputy leader in John Swinney, and when you are the party of government having a varied leadership team allows us to make sure every level of politics in Scotland to be represented.

“When you are in government, there is limitations on the way we make our positions clear, and I think that was clear around fracking. The SNP membership is against fracking, but because the Scottish Government had to consult and is currently defending the policy in court, that limited what SNP politicians in government could say.

“Having a deputy leader who is outside of government means that we can make the SNP position on issues like fracking is properly represented.”

As a councillor, McEleny said he had a valuable insight into how the bulk of policy is implemented, arguing that being able to reflect the issues affecting local government at the top of the party would be a huge advantage for the party: “This is a real opportunity to highlight the real, positive difference that SNP councils can deliver. All politics is local and a deputy leader who can advise the leader on local government would be good for the party’s future.”

McEleny did say that he agreed that councils across Scotland were making choices, but said opposition parties too often tried to lay the blame at the door of the Scottish Government whilst ignoring the impact of Westminster cuts and Scottish Government funding such as the Pupil Equity Fund which he argued took pressure off council budgets.

Voting in the election is open to all 100,000 SNP members, with polls closing on June 8 in advance of being announced at the party’s Aberdeen conference.