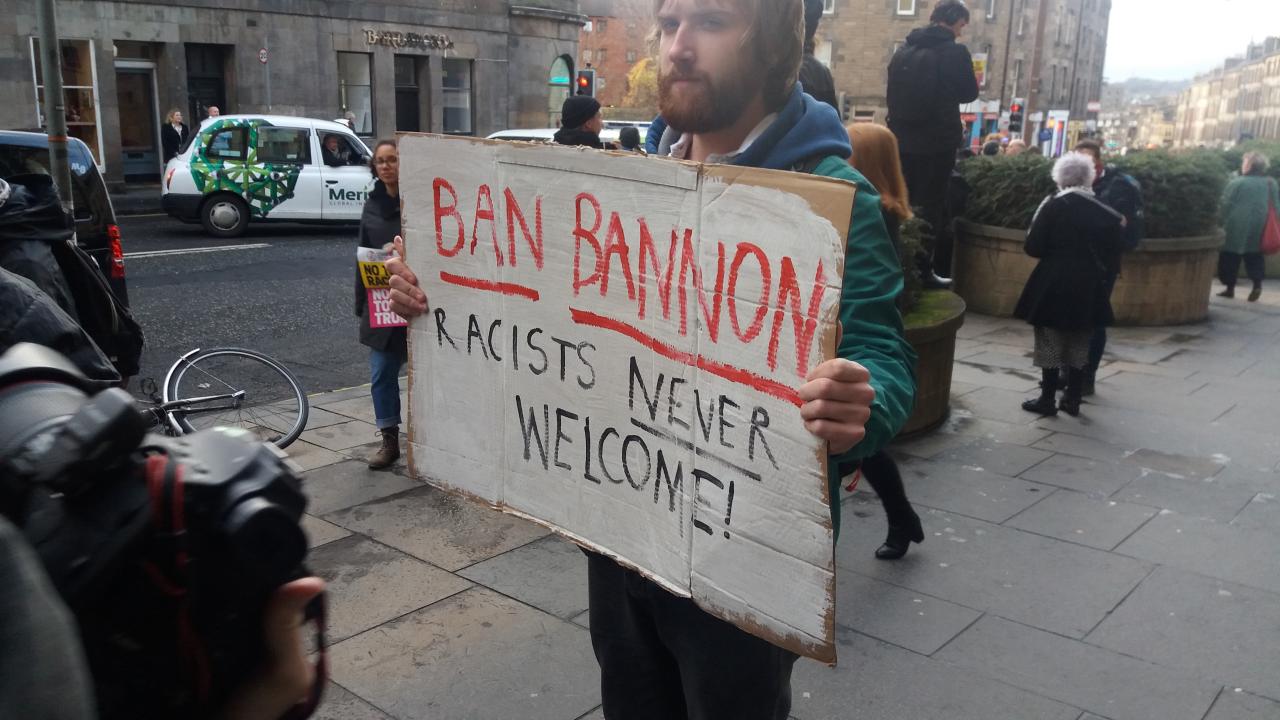 As the former Trump strategist speaks to the BBC, protest organisers claim police threatened them with arrest for holding anti-Nazi signs

PROTESTS against the presence of Steve Bannon, the far-right former strategist to US President Donald Trump, at a BBC hosted media conference in Edinburgh saw one activist arrested for “threatening and abusive behaviour”, with protest organisers claiming that police had threatened those holding anti-Nazi signs with further arrests.

Bannon spoke today (14 October) in Edinburgh at the News Xchange conference, which First Minister Nicola Sturgeon pulled out of last month after finding out that Bannon would be involved, arguing that the event risked “legitimising or normalising far-right, racist views”.

According to some estimates, 100-200 protestors assembled outside the conference venue prior to Bannon’s appearance, giving voice to what Zareen Taj of the Muslim Women’s Association of Edinburgh described as a defence of “freedom of expression”.

READ MORE: ‘We stand by our First Minister’: Hundreds set to protest outside Bannon BBC debate in Edinburgh

At approximately 2.40pm, shortly after the protest began, one protestor – described by several witnesses as carrying a sign which read ‘Nae Nazis’ and showing a scored-through swastika – was arrested. A Police Scotland spokesperson subsequently told CommonSpace that the individual was arrested for “threatening and abusive behaviour.”

Protest organisers later announced during the demonstration that they had been told by the police present that those holding similar anti-Nazi signs might also be subject to arrest. Despite the prominent display of such signs, the protest ended shortly after with no further arrests made. 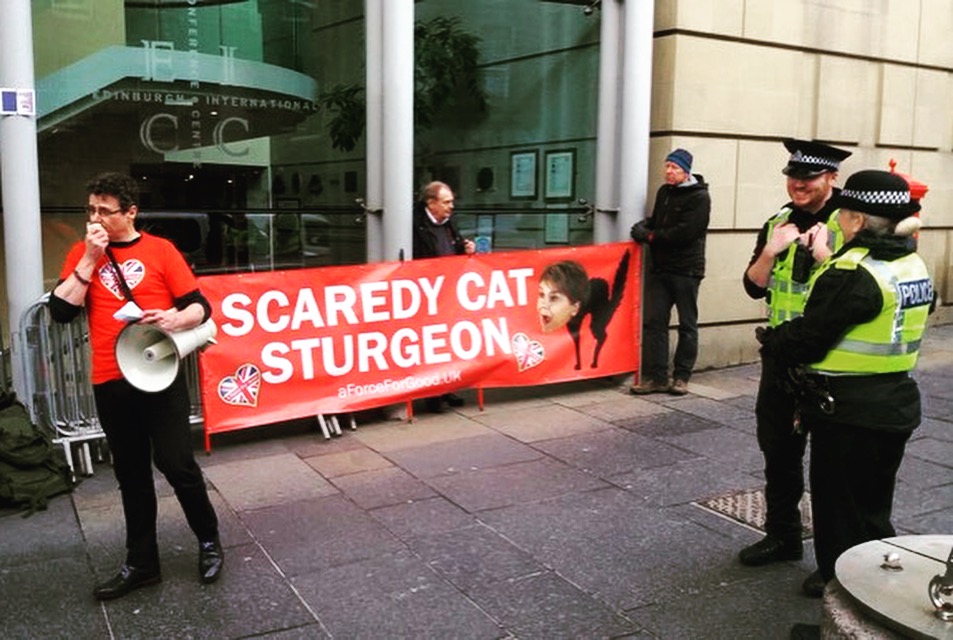 Also present was an extremely small counter-demonstration, featuring an individual identified by multiple sources, including National journalist Andrew Learmouth and Green MSP Ross Greer, as Alistair McConnachie, the far-right Scottish activist and founder of the pro-Union group A Force For Good, who was expelled from UKIP for Holocaust denial.

The counter-demonstration featured three men, including McConnachie, all of whom left shortly after the main protest began.

Recounting Scotland’s historical resistance to the far right, one speaker described how, when the British fascist Oswald Mosley attempted to organise an event in Perth, anti-fascist demonstrators “pushed his car into the Tay.”

“That’s how you deal with fascists,” concluded the speaker.

Speaking to Guardian newspaper, Stand Up to Racism Scotland’s Penny Glover commented on Bannon’s presence at the conference, saying: “Invitations like this make people credible. This was the man who dreamt up Trump’s Muslim ban; now he’s going round Europe talking to fascist thugs. These are dangerous times and I’m really pleased that people have come out to protest because we need unity.”

While the protest continued outside, Bannon was subjected to a heated interview by BBC Scotland editor Sarah Smith, during which he dismissed Sturgeon’s statements concerning his presence as “a smear”.

Bannon argued: “This is a working-class movement. That smear to say it’s racism is too simple. That’s one of the reasons populism is catching fire throughout the world.”

Defending its decision to feature Bannon, the BBC told press prior to the event: “News Xchange is an annual EBU journalism conference which the BBC and other broadcasters support to make happen.

READ MORE: Steve Bannon explained: The war-hungry ideology at the heart of the US regime

“Steve Bannon was invited on behalf of the EBU’s News Xchange committee. Good journalism in a world of fake news and disinformation is more vital that ever.

“Journalism is about asking tough questions and understanding what is happening in the world and why. A conference designed to analyse the big issues impacting that world isn’t an endorsement of anyone or anything – it is a function of what journalism is.”

Bannon has previously been the subject of political controversy in Scotland, following the revelation that he was invited to and spoke at a private function organised by the think tank Scotland International Ltd, attended by the senior Scottish businessman and chair of the influential lobbying firm Charlotte Street Partners Sir Angus Grossart.

Earlier today, an announcement by the University of Oxford’s union that it had invited Bannon to speak to its members was quickly criticised, with protests already being planned against his presence. The Oxford Students Stand Up to Racism group has denounced Bannon was “the white supremacists’ link to Donald Trump’s White House”.