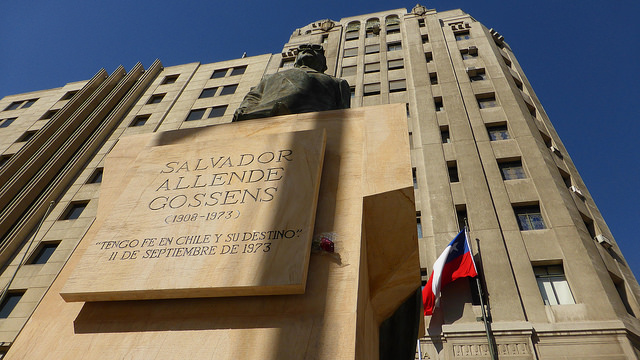 As Holyrood honours the East Kilbride engineers who refused to work on the jet engines of the Chilean dictatorship, CommonSpace looks back at the story of how Scottish workers stood against Pinochet’s regime

THE SCOTTISH PARLIAMENT today [13 September] heard a motion recognising the efforts of the East Kilbride engineers who in 1974 organised a boycott of the right-wing dictatorship of General Augusto Pinochet, and whose story has now been told in the award-winning documentary Nae Pasaran!

SNP MSP Linda Fabiani won cross-party support for the motion, which recognises both the workers behind the boycott and the film detailing their exploits, on the 45th anniversary of the bloody military coup which overthrew the elected socialist government of Salvador Allende and brought Pinochet to power.

The motion recognises the engineers, who in 1974 worked at the Rolls Royce factory in East Kilbride and refused to service the jets engines used by the Chilean air force, for their “stand against fascism in defence of the democratic rights of the Chilean people” and commends Nae Pasaran! As “a depiction of a remarkable piece of Scotland’s industrial history, which illustrates an admirable act of solidarity between Scottish workers and the Chilean people.”

Addressing the Scottish parliament’s debating chamber in a session attended by some of the workers behind the remarkable action, Fabiani described the violent coup mounted by Chile’s military under Pinochet which brought an end the country’s democratic and civilian rule, and the mass-killings and persecution which followed: “Some of us in the chamber today remember the horror of watching events unfold on our televisions, and being aware of the political activists, artists, intellectuals and workers who fled Chile with their families.”

So how did a group of working-class Scots manage to disrupt the very air force which had been used with brutal efficiency to depose Chile’s elected government from over 4,500 miles away?

Salvador Allende, the Marxist candidate for the Popular Unity coalition – an electoral alliance formed in 1969 which comprised most of Chile’s left-wing parties and movements, including the Socialist Party, the Communist Party, the Radical Party and the Social Democrat Party – was elected in Chile’s 1970 presidential election on 36.6 per cent of the vote, despite clandestine support from the CIA for his opponents.

His victory inspired hostility from the US Government, which – according to a subsequently released memorandum from then-US Secretary of State Henry Kissinger – feared the efficacy and attractiveness of a well-run, democratically elected socialist government. These fears increased when the Popular Unity coalition increased its vote to 43.2 per cent in the 1973 parliamentary elections.

Consequently, a campaign of diplomatic and economic pressure was exerted on Chile by the US, while the CIA paid millions of dollars to right-wing groups in Chile in the hopes of bringing about Allende’s downfall.

In June of 1973, elements of military and the ‘Fatherland and Liberty’ paramilitary group attempted to depose the Allende Government in a failed coup attempt, surrounding the La Moneda presidential palace with a tank regiment. Two months later, a constitutional crisis was triggered after an alliance of the right-wing Christian Democrats and National Party called upon the Chilean military t bring the government to account for “breaches of the constitution.”

In response, President Allende wrote: “I sustain that never before has Chile had a more democratic government than that over which I have the honor to preside.”

The rise of Pinochet

On 11 September 1973, the Chilean navy, army and air force began a concerted campaign to seize power, taking up strategic positions around the country, either bombing or shutting down all radio and television stations and forcing Allende to retreat to the presidential palace. When Allende’s defence minister arrived at the Chilean Ministry of Defence, he was arrested – the first prisoner of the military coup.

“Go forward knowing that, sooner rather than later, the great avenues will open again where free men will walk to build a better society.” Chilean President Salvador Allende

As bombing began on the presidential palace, Allende made a farewell address to the nation: “Workers of my country, I have faith in Chile and its destiny. Other men will overcome this dark and bitter moment when treason seeks to prevail. Go forward knowing that, sooner rather than later, the great avenues will open again where free men will walk to build a better society.

Allende died shortly afterwards, either by execution or suicide. The democratic government of Chile had fallen.

In the months that followed the coup, the Chilean military murdered thousands of citizens accused of being government supporters or leftists, many of whom were simply ‘disappeared’.

As Fabiani recounted in parliament today, the National Stadium of Chile was converted into a concentration camp and execution site for political prisoners, 40,000 of whom were imprisoned within it. In October of 1973, further political executions were perpetuated by the government-mandated death squad the Caravana de la Muerte, or ‘Caravan of Death’.

Documents declassified during the Clinton administration demonstrated the extent of US involvement in Chilean politics, with CIA operatives inserted in the country to facilitate action against the government, and encouragement given by the CIA to coup-plotters within the Chilean military.

In 1974, Bob Fulton, an engine inspector at the Rolls Royce factory in East Kilbride, informed his colleagues that a Chilean Air Force jet Engine had arrived for maintenance, and that he had refused to let it go through, citing his opposition to the new Pinochet regime.

At the time, the factory was at that time the only one in the world that serviced the engines of the Hawker Hunter jets that comprised the bulk of Pinochet’s air force, which had been employed the year before in the bombing of Allende’s presidential palace.

Following the events of the coup, Robert Somerville, a member of the Communist Party and the factory’s shop steward, brought a union motion condemning Pinochet’s military government. Fulton’s refusal to service the engines of this regime allowed the workers of East Kilbride to put this opposition into practice. When a factory inspector overruled Fulton and let the consignment of engines go through, the local union committee formalised an official boycott within hours. For the next four years, all 3,000 workers at the factory would refuse to touch any equipment associated with the Chilean dictatorship.

Eventually, in August 1978, the engines in question were mysteriously removed before dawn, with their precise fate still unknown. Reportedly, the licence plates of the vehicles used to remove the engines were fake, leading to suspicions that the British military had been involved.

Nevertheless, the boycott proved to be a powerful inspiration to the international solidarity movement with the Chilean people; when Hortensia Bussi, Allende’s widow, visited Glasgow in 1975, she described the efforts of the East Kilbride workers as a “beacon of light to those in Chile.”

Nae Pasaran! is showing in special previews in UK cinemas this month to mark the 45th anniversary of the coup, ahead of a general release on 2 November.