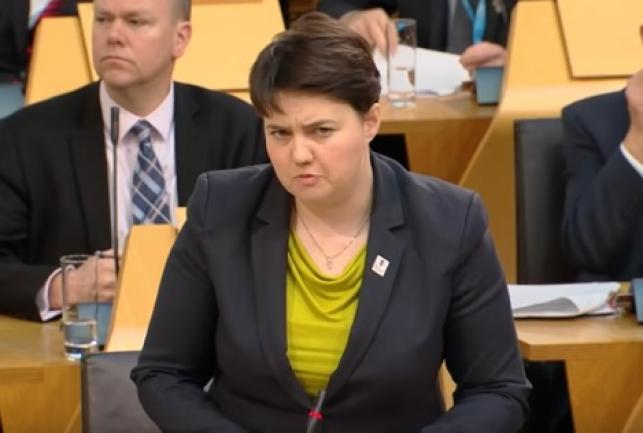 THE NATIONAL UNION OF JOURNALISTS (NUJ) has hit back at Scottish Conservative leader Ruth Davidson’s recent call for the Russian-funded broadcaster RT to be banned in the UK, saying that “journalism and journalists should not be banned”.

Writing in the Sunday Telegraph newspaper on 18 March, Davidson argued that RT – formerly known as Russia Today, on which former first minister Alex Salmond presents a weekly current affairs programme – spread “falsehoods”, and went on to advocate harsh measures that would restrict Russian state-funded media from broadcasting in the UK.

Referring to the assassination attempt on Russian ex-spy Sergei Skripal and his daughter – both of whom remain critically ill after being exposed to a nerve agent – which the UK Government has blamed upon the Russian Government, Davidson wrote: “Russia Today, the state-owned, UK-based channel described the claims of a Russian link to the Salisbury attack as ‘fanciful’.

“The NUJ believes that journalists and journalism should not be banned.” NUJ Scotland organiser Dominic Bascombe

“Even as victims lie gasping for their lives in a hospital bed in England, truth is bent beyond recognition. Russia is industrialising false information: less an Iron Curtain these days than a web of lies.”

Davidson argued that a “wider response” than the sanctions promosed by Theresa May in response to the Salisbury attack was necessary, calling for “tougher regulation of the soft-sell propaganda of Russian Today and its Sputnik offshoot”.

Davidson continued: “That Alex Salmond, the former Scottish first minister, continues to act as a frontman for RT is a shameful stain on his reputation. I hope we can soon pull the plug on it.”

“If politicians wish to raise issues of concern about the ethical or reporting standards of any media organisation then they should do so.” NUJ Scotland organiser Dominic Bascombe

Responding to Davidson’s remarks, Dominic Bascombe, Scotland organiser for the NUJ, told CommonSpace: “The NUJ believes that journalists and journalism should not be banned.

“If politicians wish to raise issues of concern about the ethical or reporting standards of any media organisation then they should do so. Banning a media outlet is an extreme step and would put the livelihoods of journalists at risk.”

The regulator Ofcom is currently reviewing RT’s licence to broadcast, following claims by UK Prime Minister Theresa May that the Russian Government is “culpable” for the Salisbury attack.

Prior to Davidson’s Sunday Telegraph article, Liberal Democrat MSP Alex Cole-Hamilton lodged a motion in the Scottish Parliament calling for RT to have its broadcasting licence suspended in the UK. Similar calls were made by Welsh Labour MP Stephen Doughty, who also urged that RT broadcasts should be blocked from being broadcast in Westminster itself.

Doughty asked: “Why should we be watching their propaganda in this parliament?”

“We continue today, as ever, to provide a valuable alternative voice within the UK media environment and we trust that Ofcom will recognise this is the case.” RT UK spokesperson

However, Labour MP Chris Williamson disagreed, telling the Times newspaper that revoking RT’s licence would be “the wrong thing to do”.

Williamson continued: “I believe in freedom of speech, and the viewing public have got a perfect choice as to whether or not they want to tune in to a particular TV channel.”

Responding to the Westminster exchange, a spokesperson for RT UK commented that the broadcaster was being used as a “political pawn”.

The RT spokesperson said: “We continue today, as ever, to provide a valuable alternative voice within the UK media environment and we trust that Ofcom will recognise this is the case and that nothing has changed.

“We will continue to provide a platform for diverse public voices including all Members of Parliament who believe in the value of open and honest dialogue.”

RT did not respond to requests for a response to Ruth Davidson’s remarks at the time of publication.